CUP: Wild last-place battle between Logano, Sorenson, and Elliott starts during the pace laps at Dover

Chase Elliott picked up the 2nd last-place finish of his Monster Energy NASCAR Cup Series career in Sunday’s Drydene 400 at the Dover International Speedway when his #9 Hooters – Give a Hoot Chevrolet blew an engine after 8 of 400 laps.

Elliott entered Sunday’s race with plenty of momentum to start the “Round of 12.” Just last week on the Charlotte Roval, he led 28 of the first 64 laps. He was still out front for a restart on Lap 65 – too far out front – as his brakes locked in the tricky braking zone known as “Heartburn Turn,” sending him nose-first into the tire barrier. The youngster managed to slam his car into reverse quick enough to not lose a lap, and the resulting caution allowed for repairs. Sure enough, just 14 laps later he was back out front, and with six laps to go took the lead for good from Kevin Harvick. The win vaulted Elliott past the Round of 16 with ease, and he now returned to a race where he scored his second Cup victory just one year ago.

As September turned to October, Elliott’s car carried a pink paint scheme for Breast Cancer Awareness Month in partnership with team sponsor Hooters, creating the “Give a Hoot” campaign. Elliott began the weekend 13th on the speed charts, improved to 5th in Happy Hour, then secured the 5th starting spot in qualifying with a speed of 165.937mph (21.695 seconds), second among the Chevrolets behind outside polesitter Kyle Larson.

Starting 38th was Reed Sorenson, who this week carried no primary or associate sponsorship on Spire Motorsports’ #77 Chevrolet. Despite Martin Truex, Jr. twice failing pre-race inspection, resulting in the ejection of a crew member, neither he nor any other driver were sent to the rear for pre-race penalties. Instead, with less than two laps to the green flag, 14th-place qualifier Joey Logano made an unexpected pit stop in the #22 Shell / Pennzoil Ford. The crew looked over the car quickly, then sent him back out onto the track. Logano completed one more pace lap, then pulled down pit road again, entering the garage through the Turn 1 entrance. “Gear and axles,” called the crew, who quickly set to work on a rear end and axle failure.

Meanwhile, back on the track, last-place qualifier Sorenson advanced to 37th for the green flag when he, too, noticed something was off with his car. After completing two laps, he pulled into the garage area at the opposite end of the track, stopping in the infield at Turns 3 and 4. Sorenson reported his car “shit out an axle,” which was now sitting at the entrance to pit road. It took some time for the Spire Motorsports crew to retrieve their car, summoning an ATV to push it back to the garage area. As they did, the crew discovered the right-rear axle was missing, and was almost certainly the axle NBC saw on pit road which was originally attributed to Logano. The debris brought out a caution, and a crewman from Spire was instructed to go to pit road and retrieve it.

Elliott’s role in the last-place battle came under this caution on Lap 9, as the #77 crew reported Elliott had slowed in Turns 3 and 4. Elliott reported that “something came apart,” and the crew lifted the hood on pit road to look over the engine. Three laps down on Lap 12, Elliott also pulled into the garage, turning left into the same Turn 1 opening that Logano entered. The #9 pulled into a stall near Logano’s (the stalls appearing next to each other on RaceView), and work began. The team apparently switched to a second radio channel as little if any radio communication was heard from that point onward.

With 13 laps complete, Logano held last place, 13 laps down with no laps turned on the track. Sorenson was 11 down, two in front of Logano, holding 37th. Elliott was another six in front of Sorenson, 5 down in 36th.

First to return to action was Logano, who on Lap 24 finally completed his first lap, 23 laps down. Four laps after this, Sorenson’s team - still on the primary channel – were looking for another hub as Logano dropped them to last on Lap 28 and Chase to 37th on Lap 33. On the 41st circuit, Elliott was interviewed for NBC saying it was an engine issue, the first indication that he may be done for the day. Two laps after this, Sorenson’s team found the axle was not simply missing, but had broken in half, the other part of it still stuck inside the housing. “Axle still in there?” said the #77 crew on Lap 43. “Okay, we've gotta pull the gear out. How the hell are we gonna get that out? Gotta get a broomstick.” This revelation meant the Spire team had to replace the entire rear end.

On Lap 53, Elliott’s #9 was the first to go “unavailable” on RaceView. Five circuits later on the 58th lap, NASCAR officials in the garage reported “9 out, engine,” indicating Elliott was done for the afternoon.

Sorenson’s crew continued to work through the first quarter of the race. On Lap 81, they were just about finished, and said they were waiting for green-flag stops to end before returning to the race. Whether this was their idea or if NASCAR instructed them to do so is unclear. On Lap 93, the car was brought closer to Turn 2, positioned for a drive back to the Turn 1 garage exit. Ten laps after this on Lap 103, Sorenson was rolling again, and was back up to speed on the backstretch on Lap 107. With Elliott out of the race, Sorenson dropped the #9 to last on Lap 114, just as the crew was loading up the car.

Sorenson ultimately completed 178 more laps before he fell out with handling issues, unable to gain another spot. Finishing 36th was Chris Buescher, who lost the engine on his #37 Kroger – Simmer Like A Winner Chevrolet. Ryan Blaney took 35th, his strong run foiled by a reported brake problem on the #12 PPG Ford. While the crew attempted to get him back in the race, he didn’t turn another lap and was listed out by suspension issues instead of brakes. Logano climbed to 34th by the finish, losing just two more laps by the checkered flag. In doing so, he closed within two laps of 33rd-place Garrett Smithley (similar to Erik Jones’ charge at Las Vegas), but wasn’t quite able to avoid his first Bottom Five of 2019.

LASTCAR STATISTICS
*This is the first time car #9 has ever finished last in a Cup Series race at Dover.
*This marked the first last-place finish for Hendrick Motorsports in a Cup Series race at Dover since September 21, 2003, when Joe Nemechek’s #25 UAW-Delphi Chevrolet was involved in a single-car crash after 78 laps of the MBNA America 400. Curiously, Nemechek was in Sunday’s race, making his 40th Cup start at Dover, and earned a solid 30th-place finish in Premium Motorsports’ #27 Chevrolet. It was Nemechek’s best Cup Series finish since August 10, 2014, when he ran 30th at Watkins Glen, and his best at Dover since September 23, 2007, when he ran 22nd for Furniture Row Racing. 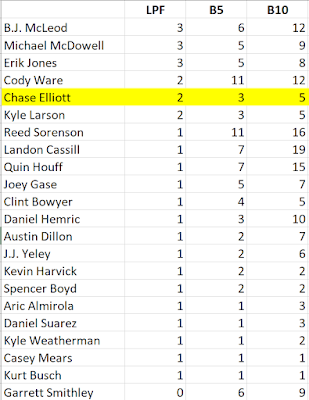