Ryan Newman picked up the 11th last-place finish of his Monster Energy NASCAR Cup Series career in Sunday’s Hollywood Casino 400 at the Kansas Speedway when his #6 Roush Performance Ford fell out with crash damage after 72 of 277 laps.

Just last week, Ryan Newman was just seven-thousandths of a second short of breaking a two-year winless streak. Coming off Turn 4 at Talladega, a track where he’s known to have as much bad luck as good, Newman was leading until Ryan Blaney slipped past at the last moment. It was the latest of a series of surprises authored by the twenty-year series veteran.

Since leaving Richard Childress Racing last year, Newman has made the most of his new home at Roush-Fenway Racing. The #6 team was on the upswing heading into the offseason, thanks to the part-time efforts of Matt Kenseth, who finished a season-best 7th and 6th in his last two starts of the year. This year, Newman’s 9th-place run at Bristol launched him into the Top 16 in points, and he’d stay there in all but six of the remaining races heading into the Playoffs. This included a six-race stretch over the summer where he finished Top 10 in five of those races, and was sealed with an 8th at Indianapolis.

Newman continued to show speed in Kansas, where Mazola Cooking Oil joined as associate sponsor of his Roush Performance Mustang. He started out 14th in opening practice, matched that 14th-place rank in Happy Hour, and improved to qualify 7th with a lap of 177.497mph (30.423 seconds). His was one of six Fords in the Top 10, a group headed by outside-polesitter David Ragan with his best qualifying run since his pole for the 2011 Brickyard 400. Sitting on his first pole was Daniel Hemric, just weeks after it was announced Tyler Reddick will take over his ride at Richard Childress Racing in 2020.

The other end of the grid proved equally surprising as the spot fell to Kevin Harvick in the #4 Jimmy John’s 3 Dollar Little John Ford. According to NBC, Harvick’s car passed pre-qualifying inspection, but the crew wanted to make another change, which then caused the car to fail three times. The resulting penalty meant Harvick was prohibited from turning a lap in qualifying. With the other 39 drivers taking time, this meant he’d have to roll off in the final spot.

After the ceremonial laps where Harvick and the other 11 playoff contenders paced the field, Harvick pulled to the back of the field. He was joined by 30th-place qualifier J.J. Yeley, whose #51 Jacob Companies Ford was sent to the rear for unapproved adjustments. Voluntarily falling to the rear was Timmy Hill, who for the first time was driving Spire Motorsports’ #77 Chevrolet. The tail end of the field then jumbled up with Hill now 38th alongside Garrett Smithley, the last-minute replacement for Austin Theriault in the #52 Bangor Savings Bank Ford. The final row saw the third Rick Ware entry of Josh Bilicki in the #53 Insurance King Ford and the #66 Page Construction Toyota of Joey Gase. All this shuffling moved Harvick from last on the grid to 34th alongside the #15 Harrah’s North Kansas City Chevrolet of Ross Chastain.

When the race started, Gase and Bilicki ran side-by-side through Turns 1 and 2 until Bilicki got the drive off, dropping Gase to last by the time they reached the stripe to end Lap 1. Two circuits later, Hill’s #77 had slipped to 39th, and Gase was now running in his tire tracks. On Lap 5, Hill pushed high and Gase got by on the inside lane, dropping Hill to last. Hill caught Gase back another two laps later, and both were soon more than 20 seconds back of the lead.

Newman entered the last-place battle on Lap 10, when he made an unscheduled stop after contact caused the team to miss a “chunk” of the right-front fender, requiring quick repairs and clearing the tires. This made Newman the first driver to lose a lap as he rejoined the race with Hill and Gase now racing for 38th and 39th. On Lap 14, both Gase and Hill were lapped by Kyle Larson, who raced past them on the outside of Turn 4. Hill passed Gase soon after they were lapped, then two laps later Gase returned the favor by diving to the apron at the stripe.

On Lap 17, outside-polesitter David Ragan’s day took a turn when he suffered a flat right-rear tire, forcing him to make an unscheduled stop. This dropped Ragan two laps down, placing him behind Newman in 40th place. On the 24th circuit, Newman caught the now 37th and 38th-place Hill and Gase and passed them both. He was followed by race leader Larson, who put the duo a second lap down on the same circuit as Ragan. Ragan, fighting an “8-to-10” tight condition, is then lapped by Larson for a third time on Lap 32, but he still managed to catch and pass first Gase, then Hill on Lap 39. This dropped Gase to last once more.

During this same run, Hill is struggling to find speed, and on Lap 42 has a close call when he moved to the low lane with Gase in the middle, both of them suddenly surrounded by the approaching leaders. Two laps later, Hill came down pit road and returned five circuits in arrears, having taken last from Gase in the process. On Lap 65, NASCAR issued a warning to Hill, now six laps down, to pick up his speed. Four laps later, Hill made a stop for tires, but curiously, no fuel, and returned to action eight laps back.

Hill is still running last when Newman’s day takes a turn for the worse. Coming off Turn 4, Newman locks fenders with teammate Ricky Stenhouse, Jr. The contact stuffs Newman’s Ford into the outside wall, hitting the barrier so hard the car bounces off the track. He comes to pit road under caution with the right side flattened, and the crew with their work cut out for them. To make sure the work was done properly, the team decided to do the work in one stop, using all but 30 seconds of the six-minute “Crash Clock.” On Lap 79, moments after the race restarted, Newman rolled off six laps down, then lost a seventh as Stage 1 ended soon after. “We’re done,” said Newman. “The track bar’s knocked out of it, man.” With that, Newman headed straight back to the garage, then steered into the garage, done for the day since he didn’t meet minimum speed on that single lap. On Lap 84, Newman’s car is “unavailable” on Race View. Then, on the 89th lap, NASCAR officials confirmed Newman was out due to an accident.

Timmy Hill didn’t run much longer, flagged off the track by NASCAR for not maintaining minimum speed. Officials said the team had run out of opportunities to fix the issue, which wasn’t communicated to one crew member who asked if the team was going to change tires. On Lap 116, the caution fell for Gase spinning off the nose of Larson in Turn 4, sending him into the grass. Team owner Carl Long said he wanted to look at Gase’s splitter in the garage, but unfortunately was told after Gase made that left turn that doing so meant Gase was out under the “Crash Clock” protocol. Thus, Gase was listed out due to an accident even though the car showed no significant damage.

LASTCAR STATISTICS
*This marked the first last-place finish for car #6 in a Cup Series race since March 18, 2018, when Trevor Bayne’s #6 Performance Plus Motor Oil Ford fell out with a crash after 108 laps of the Auto Club 400 at Fontana. The number had never before finished last in a Cup race at Kansas.
*This was also Newman’s third last-place finish in a Cup race at Kansas. The other two occurred on September 30, 2007, when he lost the engine after 108 laps, and on May 13, 2017, when he lost oil pressure after 154 laps. 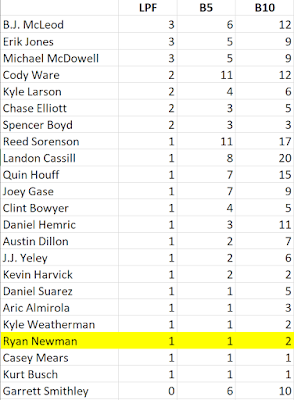