CUP: Jimmie Johnson finishes last at one of his best tracks

Jimmie Johnson picked up the 3rd last-place finish of his Monster Energy NASCAR Cup Series career in Sunday’s First Data 500 at the Martinsville Speedway when his #48 Ally Chevrolet was collected in a multi-car accident after 361 of 500 laps.

Johnson and Martinsville are as synonymous with success as the track is with Hendrick Motorsports. Coming into Sunday’s race, Johnson had made 35 starts at the half-mile track, and had only four times finished worse than 15th. The most recent of these came this past spring, where he managed just 24th, two laps down, in a race dominated by Brad Keselowski. Johnson’s first of nine victories came nearly just over fifteen years to the day of Sunday’s race, a win overshadowed by the tragic private plane crash that claimed the lives of ten people, including both the brother and son of team owner Rick Hendrick.

Sunday’s race saw Johnson on the outside of the Playoff picture for the first time in his career, something practically unthinkable just three years ago, when he tied Richard Petty and Dale Earnhardt with his seventh Cup Series title. Following a gutsy 16th-place performance at Darlington, the veteran suffered his first DNF of the season at the worst possible time, crashing out midway through the cutoff race at Indianapolis. The remaining ten races would again see Johnson try to end a more than two-year winless streak since Dover in 2017, when he matched his hero Cale Yarborough’s mark of 83 career Cup victories.

Johnson started the Martinsville weekend 10th in opening practice, dropped to 22nd in Happy Hour, then ranked just 24th in qualifying with a speed of 95.917mph (19.742 seconds). Johnson’s qualifying spot was helped by two of the four drivers whose times were disallowed on Sunday – Ryan Newman, Corey LaJoie, Timmy Hill, and B.J. McLeod. These penalties caused McLeod’s #51 Jacob Companies Chevrolet to take the 38th and final starting spot from his Rick Ware Racing teammate Garrett Smithley in the #52 RichMarFlorist.com Chevrolet.

Prior to the start of Sunday’s race, Chase Elliott was also sent to the rear after he blew the engine on his #9 Mountain Dew Chevrolet just a handful of laps into opening practice. This was a significant setback for Elliott, who not only was a Playoff driver just below the cut line, but also qualified a strong second alongside Denny Hamlin, who beat Elliott for last week’s win in Kansas.

When the race started, Elliott made quick work of the tail end of the field. Smithley, whose #52 had a left-front tire rub prior to the start according to MRN Radio, dropped to 38th place and was the first to be lapped around ten circuits into the event. By Lap 48, the spot had changed hands to Timmy Hill, who for the second-straight week was having trouble finding speed out of Spire Motorsports’ unsponsored #77 Chevrolet. Hill lost a second lap on the 66th lap, then was seen coming off pit road five laps down on Lap 87. Moments later, NBCSN’s leaderboard indicated Hill was off the track, likely indicating he’d entered the garage just past pit exit. Hill returned to action 27 laps down, though he would continue to make several unscheduled stops for the duration of the race.

Next to find trouble was Elliott, whose charge through the pack came to a halt on Lap 184 when he snapped an axle on pit road. The crew first looked to replace the right-rear axle, then decided to change the left-rear. It took some time for the crew to get the parts from the hauler, and on Lap 196 the #9 rolled behind the wall and into the garage. Due to the laps Hill lost during his own repairs, it wasn’t until Lap 216 that the #77 finally dropped Elliott to last. Had the results stayed the same, it would have marked the first last-place finish for the #9 at Martinsville since Chase’s father Bill blew an engine on April 27, 1986. The Hendrick crew completed repairs on Lap 236, at which point Elliott returned to action 52 laps in arrears.

Meanwhile, Johnson was well back of the lead battle when trouble broke out in Turn 4. A battle between Kyle Busch and Aric Almirola caused the two to hook fenders, sending them careening off the walls. Coming up on the scene, Johnson pulled low with Kyle Larson behind him. He looked for a way around the spinning Almirola, but smashed into the nose of Almirola’s #10 Smithfield Ford with his right-front. The contact steered Johnson to the left, where he stopped abruptly against the inside wall. While several other cars spun into one another, only Johnson and Almirola were eliminated with crash damage.

Elliott managed to finish the race 55 laps down, but still under power, pulling over to let the leaders go by in the final laps. He passed his teammate with around 80 laps to go, handing Johnson the last-place finish with Almirola in 37th. Hill finished 34th, his #77 falling out with transmission woes that may or may not have had something to do with his earlier trip to the garage. Completing the Bottom Five behind Hill was 35th-place Clint Bowyer, who bent the track bar on his #14 BlueDEF Ford after a pair of untimely flat tires past the entrance to pit road.

While Martin Truex, Jr. dominated the race, a trio of underdogs turned in fine performances. The first was David Ragan, who finished 11th in his #38 MDS Transport Ford, his season-best finish of his final year in full-time Cup Series competition. It was Ragan’s best run at the track since 2015, when he drove in relief of an injured Kyle Busch.

Bubba Wallace had his best showing since Indianapolis, flirting with a Top 10 finish despite damage from multiple incidents, and came home 13th in the #43 Victory Junction Chevrolet. Prior to Sunday, Wallace had finished no better than 17th in three previous Martinsville starts.

But most impressive was Corey LaJoie, who ran on the lead lap for most of the day in “The Mystery Machine,” his #32 CorvetteParts.net / Scooby Doo Ford. LaJoie ran as high as 17th before crossing the stripe in 18th. In three previous Martinsville starts, LaJoie had finished no better than 28th and never once came home on the lead lap. 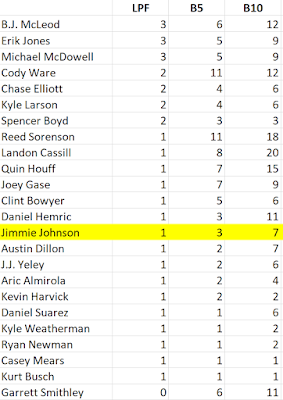