Benjamin Peterson finished last for the second time in his ARCA Menards Series career in Saturday’s Herr’s Potato Chips 200 at Lucas Oil Raceway when his #0 Peterson Racing Ford did not start.

The finish was his second consecutive and came in his second attempt at an ARCA race.

The Herr’s Potato Chips 200 was the last race that ARCA teams could use steel-bodied “old style” cars. They were outlawed on restrictor plate tracks prior to 2018, then on tracks 1 mile and over before this season. Despite the restrictions, a small contingent of teams, most notably Wayne Peterson Racing, Brad Smith Motorsports and Fast Track Racing, still used the old cars. While it is unknown exactly how many teams ran steel-bodied cars on Saturday night, it is a fair guess to say that there were a good amount in the field, including the last-place finisher.

Lucas Oil Raceway brought out a good entry list for the series, topping at 22 cars, or approximately 1.5 times the size of the NASCAR K&N East field for Dover on Friday night. Darrell Basham returned for potentially his final ARCA start, driving the #1 for Fast Track Racing. LASTCAR drivers’ championship contender Dick Doheny ran the #11 car for the team. Win-Tron Racing, after announcing that part-time driver Cole Glasson had left the team, entered Howie DiSavino III for his second start of the season. Eric Caudell brought his #7 to the track, and the Darrell Basham Racing team brought a steel-bodied #34 with Mike Basham driving. Besides that, the usual short-track crew entered, including Bobby Gerhart, Scott Melton, Ty Gibbs, Sam Mayer, Corey Heim, Chandler Smith and Carson Hocevar. Hailie Deegan also made her fifth of six scheduled starts in the Venturini Motorsports #55 machine.

In practice, Peterson anchored the charts, turning a lap of around 26.4 seconds, around 4 seconds slower than leader Chandler Smith’s lap. In qualifying, Peterson was one of three cars that didn’t take a time, along with Bret Holmes and Brad Smith, who was running a steel-bodied chassis nicknamed “Harry”.

Peterson’s car, unfortunately, never saw the track after practice, as the car did not take the green flag and was classified last in the results. Darrell Basham pulled off after a lap due to a vibration, and Caudell retired after three laps with radiator problems. Brad Smith bowed out of the race after 60 laps, citing clutch issues. Rounding out the Bottom Five was Dick Doheny, who spun and damaged both ends of his #11 machine in the process, forcing him behind the wall after 89 laps.

Give a call, however, to the #34 Basham Racing team, who ran the whole race in a steel-bodied car. Driver Mike Basham finished 13th, tying his last finish at Salem for his best run of the year.
And while the ARCA points lead may have changed after Christian Eckes benefited from rain to move past Michael Self in the points, the only LASTCAR championship that has not been decided – the drivers’ championship – continues to hang in the balance heading into the season finale in two weeks at Kansas. Brad Smith could become a LASTCAR champion with a last-place finish, as he, Dick Doheny or Wayne Peterson all win with a last-place finish. 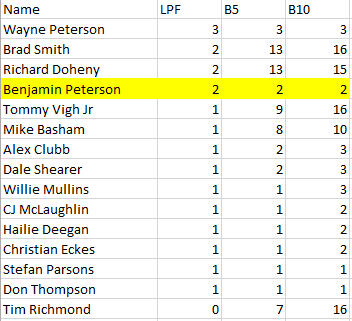