Mike Marlar picked up the 1st last-place finish of his NASCAR XFINITY Series career in Friday’s Go Bowling 250 at the Richmond Raceway when his #66 Tri Rivers Enterprises / Jones Oil Co. Toyota was involved in a single-car crash after 1 of 250 laps.

Marlar, last year’s World of Outlaws Late Model Series champion, made his NASCAR debut this past July at Eldora. Driving for Josh Reaume in the #33 Chevrolet, Marlar was slated to be sponsored by his longtime backer Marathon Oil, but NASCAR intervened and forced the Reaume team to remove the logos from his truck. Last-minute backing from Smithfield Homes ran in its place. Undeterred, Marlar went on to finish 4th in the Eldora Dirt Derby, following Stewart Friesen, Sheldon Creed, and Grant Enfinger. It was the first, and to date, only top-five finish for Reaume Brothers Racing, besting a 6th by Reaume himself in this year’s opener at Daytona. The run opened the opportunity to try his hand at XFINITY Series racing at Richmond.

Marlar’s ride this time was the #66 Toyota Camry fielded by Carl Long’s Motorsports Business Management, and in a Richmond race held on Long’s 52nd birthday. The deep blue car, nicknamed “Big Blue” by the crew, had changed drivers and car numbers multiple times this season. It was most recently run as the #61 last Saturday in Las Vegas, where Tommy Joe Martins finished ahead of Long’s other three cars in 25th place. Following the sponsorship issue in Eldora, there would be no Marathon Oil logos on the car, which was instead carried Tri Rivers Enterprises logos on the quarter-panels and Jones Oil Company on the hood and TV panel. Photos of the car showed Marlar’s name was added to the windshield on a separate rectangular white decal, covering up the previous driver’s name beneath.

In Friday’s lone practice session, paced by a surprising Gray Gaulding in SS-Green Light Racing’s #08 Panini Chevrolet one week after Gaulding just missed the cut for the Playoffs, Marlar ran 64 laps and timed in 36th of the 38 entrants, besting C.J. McLaughlin in RSS Racing’s #38 Sci Aps Chevrolet and Marlar’s teammate Stan Mullis in the #13 LasVegas.net Toyota. He then improved in qualifying, taking the 31st spot with a lap of 113.051mph (23.883 seconds).

Starting 38th and last on Friday was John Hunter Nemechek, whose mechanical issues from last week’s Truck Series race in Las Vegas carried over into his XFINITY ride with GMS Racing. While the other Playoff contenders all timed in 13th or better, the ignition failed on Nemechek’s #23 Safeway Chevrolet. The team was put on the five-minute clock, but the ignition box couldn’t be swapped out in time, leaving Nemechek as the only driver to not take a qualifying time. The completed repairs also handed the #23 team an unapproved adjustments penalty, the same penalty that docked 36th-place C.J. McLaughlin. Joining the two in the trip to the rear for the start were outside-polesitter Justin Allgaier for a tire change on his #7 Brandt Professional Agriculture Chevrolet and 26th-place Dillon Bassett, swapped in for brother Ronnie Bassett, Jr. in the #90 Bassett Gutters & More / Superior Trailer Chevrolet, both for tire changes. Allgaier’s penalty allowed eventual race winner Christopher Bell to start on the front row.

When the race started, both Allgaier and Nemehek were already ahead of at least three cars. Two had dropped to the rear before the start – 35th-place Stan Mullis and Landon Cassill, who continued his impressive streak of qualifying Morgan Shepherd’s #89 Visone RV Chevrolet in the top half of the field. Back in Shepherd’s familiar black-and-gold paint scheme, Cassill qualified 9th after an 18th-place showing in practice. However, as in his previous starts, the team still lacked the resources to make a full-race run.

Marlar, meanwhile, was slow on the start as much of the inside line drew away as the green flag dropped. Heading down the backstretch, Marlar reportedly spun and suffered damage to the right-front corner of his car, just enough to cause something to drag beneath as the car steered onto pit road with one roof flap stuck upwards. NBC Sports did not have a replay of the incident, but it was clear from his subsequent pit stop that the contact was enough to tweak the right-front corner of the nose enough to drag it on the track. The team found the damage too much to continue, and were done for the night.

Stan Mullis’ night ended in the ensuing green-flag run, out with suspension issues. Cassill pulled Morgan Shepherd’s car off the track six laps after that. Rounding out the Bottom Five were a pair of engine failures by Vinnie Miller, swapped into B.J. McLeod’s #5 J.F. Electric Chevrolet, and Brandon Brown, whose difficult September continued with a blown motor on his #86 Vector Security Chevrolet.

LASTCAR STATISTICS
*This marked the first XFINITY Series last-place finish for car #66 since May 29, 2004, when Billy Parker’s Duraflame Dodge fielded by Rusty Wallace, Inc. crashed out after 13 laps of the Carquest Auto Parts 300 at Charlotte. The number had never before finished last in an XFINITY Series race at Richmond. 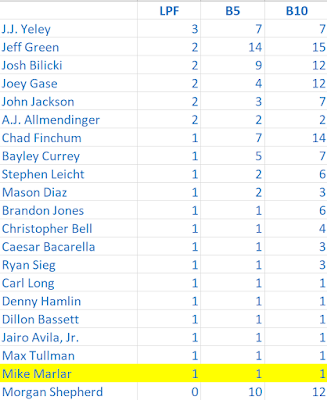