XFINITY: Means Racing’s bid to get Starr back on track hands Yeley his second-straight last-place finish on the Roval

J.J. Yeley picked up the 10th last-place finish of his NASCAR XFINITY Series career in Saturday’s Drive for the Cure 200 at the Charlotte Motor Speedway “Roval” when his #78 BringYourBible.org Toyota was involved in a crash after 5 of 67 laps.

The run at Indianapolis gave Yeley the lead in the 2019 LASTCAR XFINITY Series Championship standings, and came with the prolific RSS Racing team’s #38 Chevrolet. But last time out at Richmond, Yeley picked up a ride with B.J. McLeod Motorsports in the team’s #78 Toyota. The ride came together through the Christian student initiative “Bring Your Bible to School,” sponsoring Yeley at both Richmond and the Roval in anticipation of the group’s event on Thursday, October 4. Yeley drove a white Toyota Supra to a 21st-place finish at Richmond, and would run a black version of the scheme at the Roval.

Yeley started the weekend 27th in opening practice and didn’t participate in Happy Hour. He then qualified 29th on the grid with an average speed of 95.450mph (1 minute, 27.501 seconds).

The 38th and final starting spot went to Bayley Currey, who was making his return to NASCAR competition for the first time since a pre-workout supplement caused him to fail a drug test at Bristol. Currey drove Yeley’s previous ride, the unsponsored #38 RSS Racing Chevrolet, which carried bright yellow numbers on the doors instead of the previous white. The car didn’t post a qualifying lap, and with only 38 entrants, secured the final spot. Currey’s teammate Josh Bilicki in the #93 Insurance World Chevrolet was just one of several drivers to find trouble in practice as his crew had to rebuild the entire right-front and right-rear corner for the race. Bilicki managed 28th on the grid. JR Motorsports teammates Michael Annett and Noah Gragson were both sent to backup cars after their Chevrolets wrecked hard in Turn 5 and Turn 3, respectively. Cody Ware, Yeley’s teammate in B.J. McLeod’s unsponsored #99 Chevrolet, was also sent to a backup after he hit the barriers in Turn 3, his car towed back to the garage.

Listed as a backup was Preston Pardus, who was making his first series start since his debut at Road America. However, after nosing into the Turn 5 wall, his family’s team bolted on a new nose, and with not enough time to re-decal the new pieces (other than a hand-made #43 on the flat gray nose), Pardus qualified the car an impressive 16th. Pardus was sent to the rear along with the backups of Annett, Gragson, and Ware. In the race, Pardus worked his way to 15th with three laps to go before he spun, leaving him 27th. Also docked for adjustments were 17th-place Gray Gaulding in the #08 SS Green Light Racing Chevrolet, 22nd-place Harrison Burton in the #18 DEX Imaging Toyota, 33rd-place Joey Gase in the #35 Agri Supply Toyota, and last-place Bilicki. This kept Bilicki in the final row after all the tail-end penalties were sorted. With one lap to green, he remained next to Chad Finchum, who voluntarily fell to the rear in Motorsports Business Management’s yellow #13 Toyota to retain his 37th starting spot.

On the break, Currey edged ahead of Finchum heading into the first corner, dropping the #13 to last. He was still running in Currey’s tire tracks when trouble broke out in the backstretch chicane. Heading into the braking zone, Yeley locked up the brakes as he drew up on the inside line of cars including the #93 of Bilicki and the #4 Contec Chevrolet of Garrett Smithley. When a car slowed in front of Bilicki, Yeley rear-ended Smithley, who turned Bilicki. The incident caused Smithley to miss the chicane, and he joined outside-polesitter Tyler Reddick in stopping on the frontstretch. Bilicki continued on with the rear TV panel flapping behind his car. Yeley, meanwhile, came down pit road with the nose of his #78 caved in. The crew attempted repairs as they promptly inherited last from Finchum.

After three laps, David Starr’s #52 DrownOutCancer.com / Circle Track Warehouse Chevrolet broke a driveshaft and stalled on the apron of the oval’s third turn, drawing the first caution of the day. This dropped Starr behind Yeley, who returned to the track in his damaged machine and picked up the Lucky Dog. This meant both Starr and Yeley were each one lap down. As repairs continued on the Starr machine, a pit stop for Playoff contender Justin Haley turned disastrous as the crew discovered a broken track bar mount under the rear of the #11 Leaf Filter Chevrolet. Haley pulled his car into the garage and dropped to 37th behind Yeley, two laps ahead of Starr. Yeley returned to action two laps down by Lap 9, when he passed Haley and dropped him to 37th. But Yeley pulled out of the race soon after, done for the day in 36th. Haley and Starr rejoined the event, each multiple laps down. Haley lost six laps as the crew welded the track bar assembly in place and managed to climb to 31st. Starr didn’t return to action until the start of Stage 3, 39 laps down, when he finally dropped Yeley to last. Starr finished in 34th.

Currey and Finchum stayed at the back of the field on the restart from Starr’s incident and fell out by the start of Stage 2. Finishing 35th was a frustrated Tommy Joe Martins, who worked his way up to 11th on the first restart only to fall out with suspension issues on the #61 Diamond Gusset Jean Co. Toyota. As reported by David PeQueen, Martins’ 18th-place qualifying run marked the first time in the MBM team’s history that one of their cars qualified Top 20 in four consecutive XFINITY Series races. Teammate Timmy Hill earned a solid 18th-place finish in his 300th NASCAR start, which marked his third Top 20 finish since his breakout run under the lights at Daytona in July.

Another impressive run belonged to Alex Labbe, who has quietly capitalized on a part-time schedule with Mario Gosselin’s DGM Racing. One year after a full-time season with DGM, Labbe has struggled in his return to the NASCAR Pinty’s Series, going winless into the season finale at Jukasa Motor Speedway with a sixth-place rank in points. He skipped the Jukasa race to run the Roval, and welcomed sponsorship from Larue and Hotel le Concord on the #90 Chevrolet. Driving what appeared to be the same car Chris Dyson wrecked at Mid-Ohio, Labbe qualified a strong 6th, ran in the Top Five for much of the race, then finished in 6th. It was a new career-best for Labbe in the series and first top-ten finish since last summer at Mid-Ohio, where he ran 9th.

Sports car racer Lawson Aschenbach’s return to the XFINITY Series saw him inside the Top 10 at the start of Stage 3. His drive in an unsponsored #0 Chevrolet for JD Motorsports saw him in the middle of a four-wide battle into “Heartburn Turn,” which he survived to climb to 6th. He was still running 11th with 19 laps to go when he crossed the nose of Ray Black, Jr. off Turn 1, dropping him to 14th at the finish. The finish improved on Aschenbach’s best NASCAR finish of 18th in his series debut at Road America four years ago.

LASTCAR STATISTICS
*This marked the first XFINITY Series last-place finish for the #78 since November 17, 2018, when Vinnie Miller’s turn in the #78 JAS Expedited Trucking Chevrolet ended with clutch failure after 10 laps of the Ford EcoBoost 300 at Homestead. 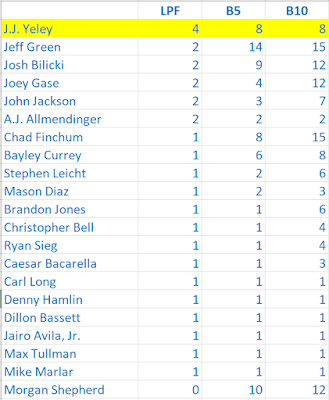