TRUCKS: On a night of engine failures in Vegas, John Hunter Nemechek’s fast truck does not start

John Hunter Nemechek picked up the 2nd last-place finish of his NASCAR Gander Outdoors Truck Series career in Friday’s World of Westgate 200 at the Las Vegas Motor Speedway when his #8 Berry’s Bullets Chevrolet did not complete any of the 134 laps due to a loss of fuel pressure.

Las Vegas marked just the second Truck Series start of the year for the younger Nemechek, and his first since last month at Bristol, where an early crash left him 29th. His focus has been on the XFINITY Series with GMS Racing in the #23 Chevrolet. Despite a streak of three-straight finishes of 21st or worse coming into the weekend, the young upstart placed himself on the verge of Playoff contention with four Top Fives and 12 Top Tens. His best series finish of the year came at the Vegas track this past March, where he ran a close second to Kyle Busch in overtime. Looking to break through, Nemechek welcomed additional backing from longtime NEMCO sponsor Berry’s Bullets, which expanded his backing on the #8 on the Truck Series side to sponsor his #23 for Saturday.

On the Truck Series side, Nemechek showed speed early, putting up the 7th-fastest speed in opening practice to rank second behind Sheldon Creed among non-Playoff drivers. The speed continued in qualifying, where he put up the 11th-best time with a speed of 176.852mph (30.534 seconds). It was a great afternoon for the NEMCO team as his teammate Tony Mrakovich qualified right alongside him in 12th, driving the part-time #87 Street Stores Hardware Chevrolet.

The 32nd starting spot ended up changing hands before the race even started. One of two accidents in qualifying befell Jesse Iwuji, whose turn in the #34 Redlist Chevrolet took a wrong turn coming out of Turn 4. Iwuji lost control and slammed into the inside pit wall nearly head-on, destroying the front clip. Iwuji was uninjured, but the truck was totaled, and the Reaume Brothers Racing team apparently didn’t have a backup ready for the race. A deal was worked out with Kart Idaho, whose #08 Sigma Engineering Toyota with Justin Johnson failed to qualify. Johnson would take the 32nd spot in Iwuji’s place, though with the door numbers altered to resemble the Reaume team’s #34 so it served as the team’s “backup.”

Iwuji thus failed to qualify along with Tyler Hill, whose run in the #56 Belimo / WCIParts.com Chevrolet (the #04 from Mosport fielded by Jordan Anderson) ended when the front valence was ripped away in the grass during his own spin. Also sent home were Cory Roper, the whose #04 Preferred Industrial Contractors Ford missed the show by one spot. Daniel Sasnett who crashed out in his own most recent qualifying attempt at Michigan, was withdrawn in the Jennifer Jo Cobb-prepared #0 Driven2Honor.org Chevrolet.

Prior to the start of Friday’s race, 4th-place qualifier Brett Moffitt incurred a tail-end penalty for changing a tire on his #24 CMR Construction & Roofing Chevrolet after qualifying. Also falling to the rear were 23rd-place Gus Dean in the #12 LG Air Conditioning Technologies Chevrolet and the 27th-place #9 Grant County Mulch Chevrolet of Codie Rohrbaugh. While Rohrbaugh and Dean were lined up in the final row as the field approached the green flag, neither were running in last place as another issue unfolded on pit road.

Following the command to start engines, as NASCAR officials discussed the retrieval of a hat that had fallen onto the track in Turn 2, John Hunter Nemechek’s truck failed to fire. Officials arranged to get Nemechek a push, but this was apparently refused as the NEMCO crew tried to figure out the issue on pit road. “It won’t fire,” said the driver as someone looked behind the driver’s seat for a power switch. “Take it to the garage. Let’s figure out what the fuck is going on.” As the pace laps continued, the NEMCO crew slowly pushed the truck behind the wall, where they continued to work. By Lap 11, someone on the radio said “If it’s over, let’s put it on the ground.” It wasn’t until Lap 48 that NASCAR officials in the garage confirmed Nemechek was out of the race, having never turned a lap or climbed from last.

The next three spots in the Bottom Five were filled by a stunning development in the Playoff battle as all three of ThorSport’s trucks in championship contention suffered nearly identical engine problems. Just six laps after Nemechek’s issues, Grant Enfinger lost a rear seal on his Ilmor engine, sending his #98 ThorSport Racing / Curb Records Ford behind the wall. The truck was then pushed to the garage before it was officially listed out the same time as Nemechek. Iwuji’s wrecked #34 sat a few stalls to the team’s right. Next came simultaneous engine failures for both Johnny Sauter in the #13 Tenda Heal Ford and Matt Crafton in the #88 Fisher Nuts / Menards Ford. Between the two, Sauter managed to return to action by the Lap 67 restart, more than 20 laps down, only to lose the engine completely. Jennifer Jo Cobb, who was originally in 28th behind Sauter and Crafton after her #10 Waldo’s Painting Chevrolet slowed down the backstretch, returned to action around this time and passed both ThorSport trucks. This lifted Cobb to 24th and dropped Jesse Iwuji’s teammate Mason Massey to the last spot in the Bottom Five in the #33 Anderson Power Services Chevrolet. All five drivers earned their first bottom-five finishes of 2019.

As engine issues continued to plague much of the field, several small teams took the opportunity to climb their way up the rankings. Among these were Brennan Poole, who not only extended a streak to six consecutive top-twenty finishes since his runner-up race at Charlotte, but finished 6th. It was the first start for Poole and the #30 On Point team since Bristol last month.

Tony Mrakovich, John Hunter Nemechek’s teammate in the #87 Chevrolet. In all the team’s previous starts this year, NEMCO’s #87 had yet to finish a single race under power, including a pair of “start-and-park” runs by Playoff contender Tyler Ankrum during his sponsorship issues at DGR-Crosley. Mrakovich worked his way into the Top 20, staying on the lead lap into Stage 3, where he reached 14th in the final twenty laps. On a night where John Hunter failed to complete a lap, Mrakovich and the Street Stores Hardware Chevrolet came home 13th.

LASTCAR STATISTICS
*This marked the first last-place finish for both John Hunter Nemechek and the #8 in a Truck Series race at Las Vegas.
*This was also the sixth time the Truck Series last-placer at Las Vegas failed to complete a single lap. The most recent time it happened was September 30, 2017, when Todd Peck’s #63 Sahlen’s / Fr8Auctions.com Chevrolet was unable to fire his engine in both qualifying and the race, and was likewise pushed to the garage. 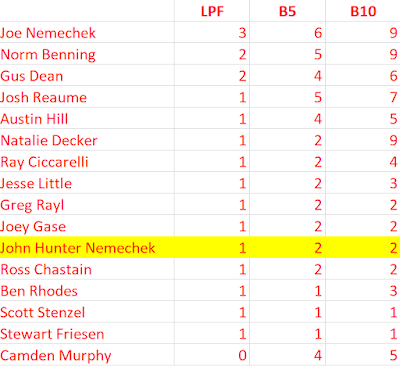