B.J. McLeod picked up the 4th last-place finish of his Monster Energy NASCAR Cup Series career in Sunday (and Monday’s) Bojangles’ Southern 500 at the Darlington Raceway when his #51 Jacob Companies Chevrolet was involved in a single-car accident after 194 of 367 laps.

Darlington marked McLeod’s third Cup start since Kentucky and his thirteenth of the season, a year where his best finish remains a 19th in the opening Daytona 500. He would run Rick Ware Racing’s flagship #51 entry, and do so with a twist. For “Throwback Weekend,” McLeod would run a scheme inspired by Clyde Torkle’s Chicken Pit Special, the 1980s Ford Thunderbird raced by Burt Reynolds’ film character Stroker Ace. McLeod’s teammates, J.J. Yeley and Garrett Smithley, would run schemes honoring veteran drivers Bill Blair and Lennie Pond, respectively.

McLeod was also running double-duty as both owner and driver in the XFINITY Series. While Matt Mills (#5), Vinnie Miller (#78), and Stefan Parsons (#99) would run his three Toyotas, McLeod would continue his driving efforts for JD Motorsports, driving a #4 South Carolina Eductation Lottery throwback scheme honoring Bobby Labonte. McLeod qualified 23rd for the Saturday race and finished 19th, the last driver on the lead lap, besting all three of the cars he owned.

On the Cup side, the “Stroker Ace” car began the weekend just 35th of 38 drivers in opening practice, then didn’t turn a lap in Happy Hour. He qualified 36th on Saturday, turning in a lap of 163.538mph (30.070 seconds). The team then incurred an unapproved adjustments penalty, which meant they would drop to the rear prior to the start of the race.

Starting 39th and last on Sunday afternoon was Joey Gase, who in addition to running double-duty was literally bringing back Motorsports Business Management’s Cup Series team for the first time since Charlotte in May. The plain black Toyota, which last ran at the Coca-Cola 600, carried associate backing from Page Construction. It also struggled to get through technical inspection, making theirs the only car to not turn a lap in the opening session. He then turned the slowest lap in Happy Hour, and was again slowest in qualifying by three-tenths of a second.

Joining Gase and the penalized McLeod at the rear was Kyle Busch, whose surprising 33rd-place qualifying run was caused by issues under the hood of his #18 Snickers Throwback Toyota. According to Bob Pockrass, the Joe Gibbs Racing team changed the engine, transmission, drive shaft, rear gear, and ECU, but were still not entirely sure what caused the issue. Aric Almirola joined him in a backup car after damaging the right-front of his #10 Smithfield Ford, while Joe Nemechek’s return to the Cup Series for the first time since 2015 included a tail-end penalty for unapproved adjustments on his #27 Premium Motorsports Chevrolet.

As the field formed up for the start following a four-hour rain delay, Nemechek and the #54 AQRE Chevrolet of Garrett Smithley dropped to the rear, and Busch and McLeod followed suit the next time by. The group then reorganized itself with Busch up to 35th ahead of Gase, the #77 MRN 50th Anniversary Chevrolet of Reed Sorenson, McLeod, and Nemechek. The McLeod and Nemechek duo remained at the rear until the green flag dropped, where Gase slipped to 38th with Nemechek now in last place.

Nemechek remained in last for the first seven laps, but by then had caught up to Gase. On Lap 11, Nemechek cut low and completed the pass, putting Gase back to last. By then, the leaders were hot on their trail, and Brad Keselowski put Gase the first car one lap down as both crossed the start / finish line on Lap 14. Both Gase and Nemechek remained just a few carlengths apart until just before the competition caution on Lap 35. During this same run, Gase lost a second lap on the 28th circuit.

Gase remained in last for the restart, and the team reported his car was too tight center-off. On Lap 50, he now had a new 38th-place driver in front of him as Garrett Smithley fell behind Nemechek. Gase began to close on Smithley’s powder blue #54, but the advance slowed as lead lap cars swarmed past them once more. Finally, on Lap 64, Gase passed Smithley, who started to lose ground to the #66. Three laps later, contact from David Ragan spun Smithley down the backstretch, and he made light contact with the inside wall. While the damage did not appear serious, a brace apparently failed behind the lower left-rear quarter-panel, causing it to flap loose under green.

The damage appeared to compromise Smithley’s speed, as by Lap 156, he was about to lose his tenth lap to the leaders. He was still in last place when the caution fell for Corey LaJoie, who hit the outside wall with the right-rear of his #32 Corvette Parts Ford, decorated to resemble Dale Jarrett’s Nestle Crunch-backed XFINITY Series car. LaJoie pitted for minor repairs and a set of tires with chrome rims, but on the Lap 162 restart, pulled into the garage area with brake failure. LaJoie managed to slow down in his stall, where the crew jacked up the right side of the car and looked over the right-rear hub. This dropped LaJoie behind Smithley on Lap 169, though on Lap 180, the car was lowered, the hood closed, and the driver returned to the track. As he got back up to speed, the #32 was in last, 23 laps down, but all 39 drivers were still running.

McLeod didn’t enter the LASTCAR battle until Lap 196, when his car came down pit road with heavy right side damage. He pulled into his pit stall, third from pit exit, then made one more slow lap before pulling into the garage area. On Lap 202, McLeod climbed out under his own power and was brought in for a precautionary check at the infield care center. The #51 was listed “OUT” on NASCAR’s leaderboard on Lap 205, confirmed out due to accident by NASCAR’s garage spotter on Lap 210, and as the Rick Ware team loaded the #51 into the #52 hauler on Lap 219, took last from Smithley.

After McLeod returned to the team’s trailer and changed into his street clothes, he talked about what put him out. “We got caught up with another car off (turn) two and got pushed up in the fence, then cut a right-front going into (turn) one trying to make it to the break, ended up knocking the wall down good. It put us out – broke an upper a-frame bracket.” He also talked about his weekend. “We were having a good run. We were really doing good as far as our class and just kind of managing the rest of the race. We weren’t quick enough to catch Ross (Chastain) or Landon (Cassill), but we were able to stay ahead of the people we’ve been ahead of all day.”

LaJoie and Smithley managed to finish the race under power, climbing two spots each to 36th and 35th, respectively. Between them came Michael McDowell and Daniel Hemric, who were collected in the night’s biggest accident. Coming off Turn 4, Hemric’s #8 Caterpillar Chevrolet lost control and slid down the track, just as Denny Hamlin’s #11 FedEx / Darrell Waltrip Throwback Toyota and McDowell’s #34 Dockside Logistics / Jimmy Means Throwback Ford were trying to squeeze by on the low lane. Both cars banged doors, sending McDowell backing hard into the outside wall. McDowell was eliminated under the damaged vehicle policy with Hemric joining him moments later.

By McLeod edging McDowell for last place, McLeod was able to take the lead in the 2019 LASTCAR Cup Series Driver’s Championship by a single bottom-five finish, 6-5. 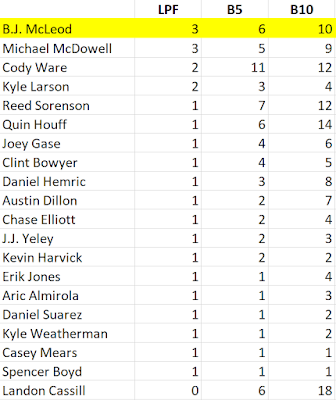