Landon Cassill picked up the 13th last-place finish of his Monster Energy NASCAR Cup Series career in Sunday’s Big Machine Vodka 400 at the Brickyard at the Indianapolis Motor Speedway when his #00 Sherfick Companies Chevrolet was involved in a hard single-car crash after 40 of 160 laps.

Now in their third year in business, the partnership of 1990 Daytona 500 champion Derrike Cope and sponsor StarCom Fiber continues to seek stability in the Cup Series. Landon Cassill’s arrival at the team last spring resulted in just three DNFs in 29 races with a best finish of 18th at Las Vegas. This year, the team shelved their part-time second team, the #99 Chevrolet, and have purchased their leased Charter from Richard Childress Racing to focus on Cassill’s #00. Again, the team has made measured progress – the team best improved to an 11th in the July race at Daytona, and other than a crash in the Daytona 500 and a busted oil cooler in the Coca-Cola 600, Cassill has brought the car home under power in all 24 remaining races.

One of StarCom’s most unique features has been the sheer number of different companies represented on Cassill’s #00. On the back of the team’s hero cards are an advertisement for three different “Star Fan Packages” designed to get new companies involved in NASCAR sponsorship. The result has seen new companies sign on, including Iron Mountain Data Centers, CGS Imaging, Jacob White Construction, Madison Group, and Home Town Lenders. Also signing up were former NASCAR sponsors like Permatex and Mane ‘n Tail shampoo.

Just last week at Darlington, StarCom Fiber sponsored one of the most popular “throwback” schemes of the weekend honoring Sterling Marlin. StarCom Racing donated a portion of t-shirt sales to the Michael J. Fox Foundation for Parkinson’s Research. Marlin’s sponsor Coors Light was so enthused by the deal that not only did they pay for tires and provide beer to the #00 crew, but donated $40 to the Foundation for each of the 364 laps Cassill completed.

For Indianapolis, Cassill would run still another new paint scheme on a brand-new car. Latest to join the #00 team was Sherfick Companies, an Indiana-based construction firm. Cassill would also run double-duty at Indianapolis, driving JD Motorsports’ #4 Chevrolet in Saturday’s Indiana 250. He finished 16th in the race, improving from a 34th-place qualifying run. The driver looked for the same improvement on Sunday, running 32nd in opening practice, skipping Happy Hour, then timing in 31st with a speed of 181.386mph (49.618 seconds).

Starting 40th and last on Sunday was J.J. Yeley, who finished last in Saturday’s XFINITY race. Yeley’s #54 Maximum Elevation Off-Road Chevrolet was one of four Rick Ware Racing entries in the field, three of them occupying the final three spots in numerical order. He was joined at the rear by Denny Hamlin, who was sent to a backup car after a hard crash in Turn 4 in Happy Hour that left his #11 FedEx Toyota on fire near the entrance to pit road. Hamlin’s backup could only manage 33rd in time trials, his worst qualifying performance of the year, and would join Yeley at the back of the field.

The start of the race saw last place change hands several times. Bilicki dropped Sieg to last after two laps, and Sieg returned the favor the next time by. On Lap 11, Playoff contender Daniel Suarez made contact with the SAFER barrier in Turn 2, drawing the caution. He dropped behind Bilicki for last the next time by as his crew fought to clear the right side fenders on his #41 Haas Automation Ford. On Lap 13, Suarez pitted a second time, and the position of his stall relating to other drivers dropped Matt Tifft to last in the #36 Southeastern Equipment & Supply / Meijer Ford. Tifft re-passed Suarez, who was on pit road for more than 90 seconds. But by then, another incident had unfolded further up pit road.

Bubba Wallace, who qualified 15th in the #43 World Wide Technology Chevrolet, slowed in the middle of a single-file line down pit road. Unable to avoid Wallace, Chase Elliott’s #9 NAPA Auto Parts Chevrolet rear-ended the #43, triggering an accordion effect that collected at least seven cars. Two of the most seriously damaged cars were the #17 Fastenal Ford of Ricky Stenhouse, Jr. and the #19 Auto Owners Insurance Toyota of Martin Truex, Jr. Truex, last of the group involved, couldn’t avoid rear-ending Stenhouse, who was pinned between Truex and the #3 Symbicort Chevrolet of Austin Dillon. Repairs dropped Wallace, then Truex to last on Lap 14 with Elliott now running by himself some distance ahead, trying to stay on the lead lap.

On Lap 26, Truex pitted a second time and lost a second lap, then a third by Lap 31. Stenhouse also made repeated pit stops for his own damage and took last during a lengthy stop on Lap 35, eventually returning four circuits back. Four laps later, Stenhouse was more than a full lap behind Truex, and in position to give car #17 its first last-place run at Indianapolis since Darrell Waltrip’s early engine failure in the August 3, 1996 running. That all changed just three laps later.

Cassill didn’t enter the last-place picture until Lap 42, when a right-front tire let go at the worst possible spot. Entering Turn 1, the #00 turned a sharp right and pounded the SAFER barrier hard enough to buckle the roof of the Chevrolet. Thankfully, Cassill was able to climb out under his own power, but the car was utterly destroyed and towed behind the wall between Turns 1 and 2, done for the day. Cassill officially took last from the lapped Stenhouse on Lap 46.

Cassill’s was just the first of several big hits to punctuate the 400-mile race. The next two spots fell to Erik Jones and Brad Keselowski, whose battle near the Top 10 turned to disaster when both spun off Turn 2. While Jones ended up with the rear clip destroyed, Keselowski’s #2 Discount Tire Ford spun backwards into a tire barrier protecting an edge of the inside wall. The tires grabbed Keselowski’s car and stopped it suddenly with the right sides off the ground. Keselowski walked away, but was upset about the safety arrangements at the track and spoke with raceway officials before the day’s end.

Kyle Busch finished a surprising 37th when his #18 Hazlenut Spread M&M’s Toyota lost an engine after a pit stop, then coasted down pit road with smoke pouring from under the hood and flames behind the right-front wheel. Rounding out the Bottom Five was Parker Kligerman, who was enjoying a solid run in the Gaunt Brothers’ #96 TRD 40th Anniversary Toyota until he was caught in the fluid from a wrecking Jimmie Johnson, sending him head-on into the rear of Johnson’s #48 Ally Chevrolet. These were just some of the eight drivers eliminated Sunday in accidents.

After briefly holding last place during the pit road debacle, Matt Tifft recovered nicely to run as high as 11th, threatening to score the first Top 10 of his young Cup Series career. But the strong run ended just short of the finish when contact from Daniel Suarez sent him sliding into the Turn 1 wall with just nine laps remaining.

Premium Motorsports enjoyed a fine run with their cars of Ross Chastain in the #15 Xchange of America / Busey Bank Chevrolet and Ryan Sieg in the #27 Sci Aps Chevrolet running 22nd and 24th, surrounding partner Spire Motorsports’ #77 Go-Parts.com Chevrolet with Reed Sorenson aboard. The team tweeted their good luck charm, a Lucky Bamboo plant given them by the Crowne Plaza hotel where the team was staying. Similarly, all four Rick Ware Racing cars managed to finish 29th or better with B.J. McLeod recovering from his last-place run at Darlington to lead the group in 25th.

But the underdog of the day had to be Bubba Wallace, who after triggering the pit road incident on Lap 13 took a car that was 5th in opening practice to a 3rd-place finish. The run was Wallace’s best overall performance since his victory in the Monster Energy Open this past May, and his best in a Cup points race since he led laps in the spring of last year at Bristol. His previous best points race finish was a 14th, again at Bristol this past August.

LASTCAR STATISTICS
*This marked the first last-place finish for both Cassill and car #00 in a Cup race at Indianapolis. 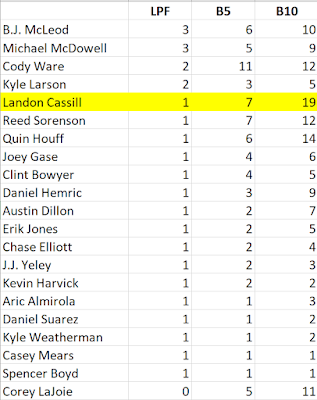