Erik Jones picked up the 6th last-place finish of his Monster Energy NASCAR Cup Series career in Sunday’s Bank of America ROVAL 400 at the Charlotte Motor Speedway “Roval” when his #20 Craftsman Toyota crashed after 23 laps.

Following his disqualification at Richmond, Jones found himself last in the Playoff rankings, 45 points out of a Playoff berth. To advance, he’d have to win the very next race, the second-ever at the unpredictable Roval. Last year in this race, Jones’ car was the last to finish under power in the 30th spot.

Jones looked to have a fast car, ranking 7th in the opening practice, but timed in just 24th in the second and 20th in Happy Hour. He rebounded somewhat in qualifying, timing in 15th with a speed of 101.887mph (1 minute, 21.973 seconds). Most importantly, he would race with his primary car, something that could not be said of many of his competitors.

Qualifying 40th and last in Sunday’s field was Parker Kligerman, one of three drivers sent to the rear for backup cars. In practice, Kligerman’s #96 TRD 40th Anniversary Toyota struck the barrier exiting “Heartburn Turn” at Turn 1. Joining him in the rear were backups for 28th-place Denny Hamlin, whose #11 FedEx Toyota picked up a banner after backing into the Turn 5 wall, and outside-polesitter Alex Bowman, who wrecked his #88 Nationwide Chevrolet in Happy Hour during a recent illness.

Also dropping back were 8th-place Martin Truex, Jr. for an engine change on the #19 Bass Pro Shops / Tracker Boats Toyota, 32nd-place Landon Cassill for unapproved adjustments on the #00 Coladka Chevrolet, and 31st-place J.J. Yeley, who was swapped in for Cody Ware in the #51 Jacob Companies Chevrolet. Ware started the previous day’s XFINITY race, but extreme heat led to Stefan Parsons taking over midway through. Michael McDowell also climbed back into his #34 Love’s Travel Stops / Delo Ford after kidney stones forced him to have Austin Cindric practice the car. McDowell rebounded by qualifying 22nd and running 5th in Happy Hour. He capped the weekend with a sterling 12th-place finish.

Prior to the start, both 35th-place Garrett Smithley in the #52 Victory Lane / Kendall Oil Chevrolet and 36th-place Matt Tifft in the #36 Louis Kemp Crab Delights Ford fell out of line, then rejoined the pack by the time the field entered the backstretch. Coming to one lap to green, 38th-place Reed Sorenson took over last place in the #77 Aquesta Bank Chevrolet even though he wasn’t one of the penalized drivers. His Spire Motorsports car was soon joined by his Premium Motorsports teammates Ross Chastain in the #15 Empire Auto Group Chevrvolet and the unsponsored #27 of Joe Nemechek, who qualified 37th and 39th respectively. This hoisted last-place qualifier Kligerman past several cars, and Martin Truex, Jr. up to 30th.

When the green flag dropped, Nemechek and Sorenson raced each other into Turn 1, where Sorenson edged ahead. By the backstretch, Nemechek closed on Sorenson as the field checked up for Alex Bowman’s spin, nearly collecting Austin Dillon and Bubba Wallace. Bowman’s #88 took over last place on Lap 2 when he came in for fresh tires. Just past pit entrance on Lap 5, he was informed he’d have to make a pass-through penalty for cutting the chicane during his spin. The pass-through on Lap 6 cost Bowman another 20 seconds to the leaders, but he was still on the tail end of the lead lap, several turns ahead of race leader and teammate William Byron. By then, Bowman was told his was among the three-fastest cars in the field.

On Lap 9, Bowman passed a slowing Corey LaJoie, whose #32 Samaritan’s Feet Ford may have run off-course in Turn 4. As he recovered, LaJoie began to complain that his car was down on power and cited a possible issue with the fuel cell. The Go FAS Racing team looked for their backup cell, which wasn’t designed for road courses, and by Lap 12 planned to replace the module instead of the entire cell. The next time by on Lap 13, LaJoie caught and passed Sorenson, dropping the #77 back to last place. Sorenson was then caught by race leader William Byron in Turn 5, then put the first car one lap down as both returned to the oval. By then, both LaJoie and Bowman were climbing up the pack, dropping Sorenson, Nemechek, and the #66 Motorsports Business Management Toyota of Timmy Hill to the final three spots.

The first caution fell on Lap 20 for a spin by Ryan Preece’s #47 Kroger Chevrolet. By then, Sorenson reported a serious wheel hop as his car entered the backstretch chicane. LaJoie also prepared to make his pit stop, where two crew members would open the trunk and replace the fuel cell module. On Lap 22, Timmy Hill briefly took last on pit road, the last of three cars that were one lap down. Nemechek retook the spot a moment later while LaJoie rejoined the tail end of the field, only to be told he’d be penalized for pitting out of the box. As LaJoie snaked through the chicane to catch the tail end of the field, he passed a slowing Ross Chastain who pulled to the apron of the oval’s third corner. The driver had cycled his system to save energy when the motor cut out. Undeterred, NASCAR let the race restart, only to have the leaders tangle in Turn 1 to draw the caution once more. It was not until this yellow that Chastain got a push back to the pits.

It was during this wreck that Jones received the damage that would shorten his day. While Jones restarted 8th, several rows back Chris Buescher’s #37 Velveeta Chevrolet careened into the cars in front of him, triggering a multi-car pileup. Jones, near the front of this line as the leaders made the hard left turn, was caught by a sliding Alex Bowman and spun 180 degrees, striking the wall with the left-rear and left-front. Jones made it back to pit road, where the damage at first didn’t appear so serious. Further back, Chastain’s crew looked over the battery and the alternator, losing a lap when the car’s gauges read no volts. The team took their time with the issue, losing a second lap in the process before he rejoined the race.

But Jones lost laps as well, and soon returned to the pits, then made a hard left into the garage area. His day was done – off RaceView by Lap 27, then confirmed out by accident by NASCAR officials on Lap 29. And so, for the second-straight season, last-place finishes knocked Jones out of the first round of the Playoffs.

In the wild race that followed, Sorenson took the 39th spot with electrical issues on the #77. Finishing 38th was Josh Bilicki, who broke a rear track bar mount on the #53 AQRE.app Chevrolet, not long after he avoided a spin in the infield portion of the track. Kyle Busch took home 37th, losing multiple laps from a flat left-front that damaged his suspension. He was still running when Garrett Smithley’s broken axle on the #52 Victory Lane / Kendall Oil Ford dropped fluid in the oval’s third corner, ending his day. On the hot afternoon, Busch turned back up pit road and drove the wrong way back to the garage area, his #18 M&M’s Hazlenut Spread Toyota done for the day. Smithley edged Busch to round out the Bottom Five.

LASTCAR STATISTICS
*Jones is the first driver to finish last in consecutive Cup Series races since March 26, 2017, when Jeffrey Earnhardt followed a transmission issue at Phoenix with engine trouble in Fontana.
*This marked the first Cup Series last-place finish for the #20 on a road course since June 13, 1976, when Ron Esau’s #20 Peralta Ford burned a clutch after 6 laps around Riverside International Raceway. 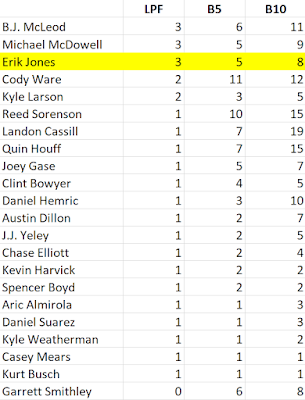