Wayne Peterson collected the 43rd last-place finish of his ARCA Menards Series career in Saturday’s Southern Illinois 100 at DuQuoin State Fairgrounds Racetrack when his #0 Josh’s Eggs Ford retired from the raced with suspension issues after completing 1 of 100 laps. The finish came in Peterson’s 108th career start and was his second consecutive.

Wayne Peterson Racing once again utilized a two-car lineup for the second and final dirt race of the 2019 ARCA Menards Series season, with regular team driver Tim Richmond in the 06 machine and team owner Wayne Peterson in the 0 car. This time, however, Peterson picked up sponsorship from Josh’s Eggs. Other than that, the entry list remained much the same: 20 cars showed up, with mostly the same teams and drivers. The most notable exception to that was the return of a familiar driver and number: Ken Schrader piloted his own #52 car, the first time that Schrader has fielded an entry since Daytona of this year. Other than that, Eric Caudell and Dale Shearer did not enter their cars. As for driver changes, Fast Track Racing was the only team to shuffle drivers around, as Mike Basham did not return and Tyler Speer made his first start since this race two years ago.

A pair of Illinois dirt ringers topped the practice speeds – Ryan Unzicker led the way and Kelly Kovski took the runner-up spot. All 20 cars took a time, and Peterson was slowest, recording a lap of 47.848 seconds, about fifteen seconds behind Unzicker’s time. Qualifying brought another dirt star at the top of the charts - Schrader - who became the oldest pole winner in series history, and was in contention until a pit penalty knocked the 52 out of the lead battle. Peterson again took last, running a lap of about 49 seconds even.

The race started with Schrader out front for only a lap before Kovski took the lead. Peterson, however, stayed at the back of the field for two laps before he turned in – officially crediting him with a lap completed. It marked the first time since the 2016 Kansas ARCA 150 that Peterson completed a lap in an ARCA race. Ten race attempts had passed since then, including six last year that secured him the LASTCAR championship. The other LASTCAR drivers’ championship contender, Dick Doheny, followed Peterson behind the wall two laps later. Will Kimmel, Speer and Brad Smith rounded out the Bottom Five, all citing overheating issues as the cause for retirement.
With the last-place finish, Peterson vaulted into first place in the LASTCAR drivers’ championship. His team secured its hold on the owners’ championship lead, and Ford clinched the owners’ title. 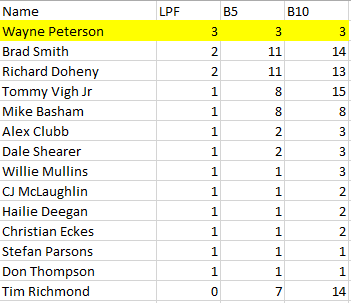