Benjamin Peterson finished last for the first time in his ARCA Menards Series career in Saturday’s Kentuckiana Ford Dealers Fall Classic 200 at Salem Speedway when his #0 Josh’s Eggs Ford retired with brake issues after completing 3 of the race’s 200 laps. The finish came in his series debut.

A third generation of the Peterson ARCA family took the wheel on Saturday. He subbed in place of his grandfather, Wayne Peterson. Michael Peterson, Wayne’s son, has not made an ARCA start but has been a part of the Wayne Peterson Racing team for a long time, including as the listed car owner for entries in the early 2000s.

Peterson joined a number of part-time drivers to complete an entry list that contained 21 drivers. Ed Pompa returned and had the Best Throwback as voted on at the track, a Darrell Waltrip Western Auto tribute on his #11 Fast Track Racing car. Brian Finney made his first start in his #80 since Nashville in 2017. Darrell Basham Racing rolled out a car for Salem with family driver mike behind the wheel, and Colby Howard continued his part-time schedule with Win-Tron Racing. On that same note, Gavin Harlien drove in the last of three planned races in Venturini Motorsports’ #55 machine.

Ty Gibbs commenced his weekend domination in practice, going on top of the leaderboard. Peterson was slowest of the field, his lap of 20.8 seconds more than three off the pace of Gibbs. In qualifying, Peterson was also slowest of cars that took a time, clocking in at 23.3 seconds. However, Brad Smith’s #48 Ford did not take a time, leaving him last on the grid heading into the race.

ARCA’s timing and scoring, however, indicated that three cars dropped behind Smith coming to the green: Peterson, Finney and the #1 of Richard Doheny. Doheny was last at the end of laps one and two, but passed Peterson by the end of lap three, dropping the #0 to last. It was a timely pass, too, as both entries went behind the wall one laps later. Tommy Vigh, Smith, and Finney rounded out the Bottom Five, all retiring with mechanical issues.

With the manufacturers championship locked up for Ford, the finish claimed the owners’ title for Wayne Peterson Racing. The team now has six last-place finishes on the year, double the amount of second-place team Fast Track Racing, an insurmountable gap with only two events remaining on the calendar. The drivers title is still up for grabs, but for either Richard Doheny or Brad Smith to pass current leader Wayne Peterson, they would have to finish last in both of the remaining races. 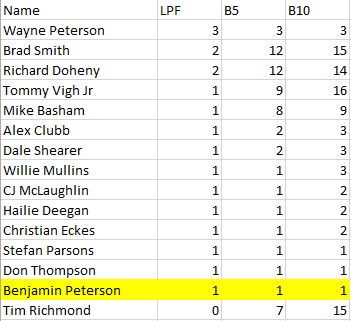