Max Tullman picked up the 1st last-place finish of his NASCAR XFINITY Series career in Saturday’s B&L Transport 170 at the Mid-Ohio Sports Car Course when his #53 Means Motorsports Chevrolet fell out with a loss of fuel pressure after 2 of 75 laps.

A 21-year-old racer from Chester Springs, Pennsylvania, Tullman has raced infrequently among most of NASCAR and ARCA’s top series. He ran four K&N Pro Series races in 2017, finishing inside the Top 10 each time. The next year, he made eight starts in the ARCA Menards Series for Mason Mitchell Motorsports, finishing a best of 6th on the plate races at Daytona and Talladega. He also ran three Truck Series starts that year for Young’s Motorsports with a best of 9th at Talladega. His XFINITY debut came during the summer with a team he partially owned, Tullman Walker Racing. The #26 Ford attempted four races and made three, but ran no better than a 23rd in Las Vegas.

Thanks to his strong runs on the plate tracks, Tullman has continued to earn part-time rides in the XFINITY Series this year. Coming into Saturday, he’d driven for Motorsports Business Management at both the Daytona opener and at Talladega. He finished under power both times, coming home 28th in the first and 20th in the second. Mid-Ohio would be a very different race for Tullman, as he was originally not even entered.

Tullman landed in Jimmy Means Racing’s second car, a team Means has entered frequently when there have been short fields. In the past, it was the #79, but this time around, it was the #53, a number with obscure significance to the team. While Means had never entered the #53 in an XFINITY race, it was frequently a “start-and-park” entry for his Cup team in the early 1990s, including Johnny McFadden’s LASTCAR title in 1992. That year, a Means #52 became the #53 by crafting a “3” out of two upper halves of number “2” decals. According to Sebastian LaForge from Motorsports Business Management, this #53 was Means Racing’s Kentucky car with no adjustments made to it to run a road course. Franklin Signs & Graphics had their logos on the quarter panels. No driver was entered in the car until late in the week, when Tullman was named to drive.

Tullman didn’t participate in opening practice, then ran slowest of the 33 drivers who turned a lap in Happy Hour. His best of two laps was just 65.581mph (2 minutes, 3.950 seconds), 38.567 seconds off Jack Hawksworth’s fastest time in Joe Gibbs Racing’s #18, and just over thirty seconds off the next-slowest car of Vinnie Miller, driving the same car that failed to start last week in Watkins Glen. With exactly 38 drivers entered for as many spots, Tullman was still assured a spot in Saturday’s field, though he did not complete a qualifying lap. Tullman’s part-time car was outranked by the B.J. McLeod Motrosports #99, which road racer Patrick Gallagher likewise did not run in qualifying after he ran off course in practice.

On race day, Tullman and Gallagher were among the five drivers sent to the rear before the start for unapproved adjustments. Joining them were 12th-place Regan Smith for brake line issues on the #8 Fire Alarm Services Chevrolet, 13th-place Justin Haley for something moving around in the rear end of his #11 Leaf Filter Chevrolet, and Aaron Quine, the second-straight road course ringer to make his series debut with Mike Harmon Racing. Quine had qualified Harmon’s #74 Summit Racing Equipment Chevrolet 31st on the grid, and unlike Dan Corcoran at Watkins Glen, was able to take the green flag with the rest of the field.

When the green flag fell, Tullman was in the last row, 9.186 seconds back of the lead, but this time alongside 36th-place qualifier J.J. Yeley, who voluntarily fell to the rear in the #38 RSS Racing Chevrolet. On that first lap, Tullman was told over the radio to pit his car and go to the garage, apparently done for the day. But by Lap 4, Tullman was back on the track and shown on camera trying to stay out of the way of the leaders as they passed by. By this point, Yeley had pulled his #38 behind the wall. Tullman joined him soon after, and both ended up credited with just two laps complete. Tullman was unable to pass Yeley for 37th before he pulled in that second time, this time for good.

Finishing 36th was Joey Gase, who went behind the wall after eight laps due to a leak that proved terminal to his #35 Lifeline of Ohio / Donate Life Toyota. Gase’s teammate Chad Finchum took 35th in the #13 MBM Motorsports Toyota, having swapped rides with Timmy Hill, who took over the #42 in place of an originally scheduled Stanton Barrett.

Rounding out the group was sports car driver Chris Dyson, making his NASCAR debut in the #90 Thetford Chevrolet fielded by DGM Racing. A press release on the Trans Am page indicated Dyson picked up the ride through friend and teammate Andy Lally, who drove the #90 to a strong 7th-place finish at Mid-Ohio in 2016. After a runner-up finish to Ernie Francis, Jr. in Dyson Racing’s Mustang, Dyson qualified 27th in the DGM car, only to rear-end Cole Custer on a Lap 31 restart, destroying the front end. While Dyson promptly pulled his car off the track, crews mistakenly towed it across the track, leaving a long trail of fluid that required four laps to clean.

Making his second series start, Will Rodgers had the most serious accident in Friday practice, running off course in China Beach and ripping the front valence from off his car. The Brandonbilt Motorsports team replaced the lower front valence and splitter, and were still working on repairing and decaling it Saturday morning. After starting 22nd, he ran as high as 3rd by staying out on old tires for a restart with 16 laps to go. He finished 12th.

LASTCAR STATISTICS
*This marked only the third last-place finish for car #53 in an XFINITY Series race and the first since October 21, 2000, when Hank Parker, Jr.’s Team Marines Chevrolet was involved in a crash after 24 laps of the Sam’s Club 200 at Rockingham. The only other last-place finish for the number in XFINITY came on April 20, 1985, when Ronnie Thomas’ Green Hill Sausage Pontiac lost an engine five laps into the Busch 200 at South Boston Speedway. Coming into Saturday’s race, only six other currently available car numbers had two or fewer last-place finishes in the series: #30, #65, #69, #78, #80, and #06.
*The only other recorded time in XFINITY Series history where the last-place finisher retired with a loss of fuel pressure came on October 9, 2010, when Jeff Green’s #36 TriStar Motorsports Chevrolet retired after 2 laps of the CampingWorld.com 300 at Fontana. 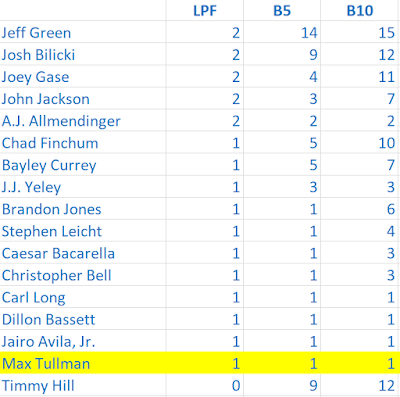