XFINITY: J.J. Yeley the only RSS Racing car not to score stage points at Road America

J.J. Yeley finished last for the 8th time in his NASCAR XFINITY Series career in Saturday’s CTECH Manufacturing 180 at Road America when his #38 unsponsored RSS Racing Chevrolet retired with electrical after 2 of 45 laps.

The finish, which came in Yeley’s 319th start, was his second of the season and first since Iowa, four races ago. In the XFINITY Series last-place rankings, it was the 18th for the #38, the 52nd from electrical issues, and the 534th for Chevrolet. Across NASCAR’s top three series, it was the 51st for the #38, the 125th from electrical problems, and the 1,681st for Chevrolet.

Since Jeff Green’s shoulder surgery, Yeley has become a semi-regular figure around the RSS Racing camp. He has run every race for the team since Iowa Speedway, his most previous XFINITY Series last-place finish. In four of those races, he has piloted the #38, at Bristol with funding, he was in the #93. At Road America, Yeley would be one of two RSS Racing cars without sponsorship, flagship driver Ryan Sieg had no primary sponsor while local driver Josh Bilicki, living in nearby Lomira, Wisconsin, brought on board Wisconsin industrial company Ariens to adorn the car.

Starting last on time Saturday was 66-year-old driver Dick Karth, of nearby Grafton, Wisconsin. Despite the identical number to the one MBM ran at Bristol, the 61 machine he was driving was not in a partnership with Hattori Racing Enterprises, but after MBM Motorsports transferred owners points from the 42 to the 61, they could not change it back and so the entry will be numbered 61 for the remainder of the season. On the side of Karth’s car was the Dick Trickle Memorial Project, a cause special to him because Karth actually acquired one of Trickle’s old Heiling-Meyers #90 cars in the mid-2000s. Later on, Karth brought the car to Road America and learned to road race with it. Karth’s lap of 2 minutes, 30.59 seconds was less than three seconds off of Vinnie Miller’s 37th-place lap of 2 minutes, 27.80 seconds.

Karth would actually line up 33rd on the grid, as five tail-end penalties were assessed. Brandon Jones was forced to a backup car after nosing into the wall near Canada Corner during practice on Friday, and Dexter Bean’s #90 machine had to change an engine after qualifying, making for a late thrash effort. Three cars were sent to the back for unapproved adjustments: NASCAR Euro’s Loris Hezemans for rear decklid repairs, Elkhart Lake’s own Nicolas Hammann for fixes in what looked to be the suspension or transmission, and XFINITY Series regular Brandon Brown. Additionally, the cars of Yeley and Chad Finchum dropped to the back before the start of the race, Yeley about three car lengths back from the rest of the field.

Brandon Brown, sent to the back for unapproved adjustments before the race, had a quiet ten laps before retiring with suspension issues. Preston Pardus had an eventful XFINITY Series debut, starting fifteenth and running as high as thirteenth before having an off in turn twelve and later stalling out sideways at the exit of pit road before being towed back to the garage. He was eventually credited with 14 laps completed. Chad Finchum brought his “banana split” car behind the wall after 15 laps, citing transmission issues. Rounding out the Bottom Five was Garrett Smithley, who played pit strategy to run as high as third in the final stage before dropping back on old tires and eventually losing a cylinder before going to the garage.

While Yeley was the first car out, on the whole it was a good day for the RSS Racing organization. Both other cars scored stage points, with Sieg scoring seven total points between two stages and Josh Bilicki finishing tenth in Stage Two.

LASTCAR STATISTICS
*This marked the third straight last-place finish for RSS Racing in the XFINITY race at Road America, but the first ever for car #38 at the track. 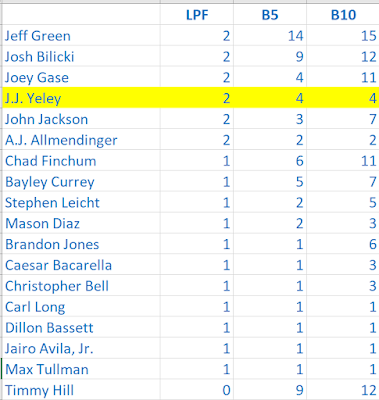