XFINITY: A.J. Allmendinger, Kaulig Racing last by disqualification for the second time in a month

A.J. Allmendinger picked up the 2nd last-place finish of his NASCAR XFINITY Series career in Saturday’s Zippo 200 at the Glen at Watkins Glen International when his #10 Death Wish Coffee Chevrolet finished 2nd, completing all 82 laps, but was disqualified for illegal rear height.

The finish, which came in Allmendinger’s 13th series start, was his second of the season and first since Daytona, four races ago, where he was also disqualified. In the XFINITY Series last-place rankings, this was the 8th by disqualification, the 72nd for the #10, and the 531st for Chevrolet. Across NASCAR’s top three series, this was the 31st from disqualification, the 125th for the #10, and the 1,676th for Chevrolet.

Vinnie Miller picked up the 2nd last-place finish of his NASCAR XFINITY Series career in Saturday’s Zippo 200 at Watkins Glen International when his #78 Pit Viper Chevrolet failed to complete any of the 82 laps due to an ignition issue.

The finish, which came in Miller’s 54th series start, was his first since last November’s season finale at Homestead, 20 races ago. In the XFINITY Series last-place rankings, it was the 6th for the #78, the 42nd from ignition troubles, and the 531st for Chevrolet. Across NASCAR’s top three series, it was the 34th for the #78, the 111th from ignition trouble, and the 1,676th for Chevrolet.

When we last saw Allmendinger drive an XFINITY Series car, he was one of a record three entries fielded by Matthew Kaulig in the July race at Daytona. The trio of himself, Ross Chastain, and Justin Haley swept the top three finishing positions – until 3rd-place Allmendinger was disqualified in post-race inspection. He would rejoin the team at Watkins Glen, again running the #10 Chevrolet, but this time with sponsorship from Death Wish Coffee, Daniel Hemric’s sponsor in this race two years ago, and again with Ty Dillon in the Cup race at Dover in 2016. Allmendinger looked to improve on a runner-up finish in this race last year, when he was driving for GMS Racing. The Kaulig team was also eager for a return to victory lane following the passing of Haley's crew chief Nick Harrison just two weeks ago in Loudon.

Starting 37th and last on the grid was Vinnie Miller in the #78 Pit Viper Sunglasses Chevrolet. Miller started the weekend 33rd of 34 drivers in opening practice, outpacing J.J. Yeley’s apparently canceled lap turned at just 25.232mph (5 minutes, 49.558 seconds), then didn’t turn a lap in Happy Hour. Miller hoped to turn things around at Watkins Glen after a hard crash in this race last year, when he nosed hard into the Turn 1 tire barriers. But trouble found him once again, this time in qualifying. Heading into the Esses, Miller’s car erupted in smoke from a ruptured oil cooler, then nosed hard into the outside wall.

While still guaranteed a starting spot due to a short entry list of 37 drivers, Miller would have to start last as the only driver to not complete a timed lap. According to Spencer Gogol, the team acquired a nose from Justin Allgaier’s JR Motorsports entry. Both Miller and Matt Mills, serving as spotter while Scott Heckert drove his #5, peeled off the corn stickers along the base of the front valence, but the nose would remain the same bright red as Allgaier’s car for the race. Matt Toasty caught video of the #78 with its new nose re-fired in the garage, though still spewing white smoke from the engine.

Photos from Mike Raphael showed both Miller and 35th-place starter Chad Finchum, driving a new yellow-and-blue paint scheme on Motorsports Business Management’s #13 Toyota, needed a push down pit road after the command to start engines. While Finchum’s car fired, Miller’s apparently did not, and he would miss the start of the race. Just before the green, Miller was joined in the garage by the Mike Harmon-owned #74 Chevrolet, shown 24.624 seconds back of the lead as the race started. Harmon was not driving the car, and had not named a driver until late in the week, when Canadian racer Dan Corcoran was selected to make his first NASCAR start.

For a moment, it appeared that Saturday would mark the first time since February 17, 1990 that the bottom two finishers were classified as a “did not start” (DNS). That day, Morgan Shepherd was classified last after he wrecked his car in practice, becoming the first DNS in series history. Next-to-last-place finisher Kirk Bryant was also listed as a DNS for reasons unknown.

That soon changed, as on Lap 4, the Harmon crew was testing the radio while working to get Corcoran back on the track. The engine fired on Lap 7, just as B.J. McLeod pulled the #15 JD Motorsports Chevrolet into the garage, saying the brake pedal was going to the floor. McLeod was immediately joined by J.J. Yeley in RSS Racing’s #38 Chevrolet. McLeod eventually returned after checking the rotors and bleeding the brakes, and joined Corcoran in climbing out of the Bottom Five. Yeley did not return to action, and was joined soon by Joey Gase, whose #35 Toyota stalled exiting Turn 1, drawing the caution.

By the time Finchum joined Gase in the garage, the caution fell for Ross Chastain, whose #4 Buckle Up New York Chevrolet clobbered the tire barrier in Turn 5. Chastain had been bumped by Justin Allgaier, who Chastain turned in the same spot laps earlier. This put Chastain behind Finchum in the final running order.

Out on the track, A.J. Allmendinger led 24 laps, including a victory in Stage 2. With seven to go, he was holding onto a large lead, thanks in part to an incredible save by Christopher Bell, who spun his #20 Rheem Toyota in the Esses in front of the entire field, but managed to keep going. This same incident, however, breathed new life into Austin Cindric, whose #22 MoneyLion Ford jumped to 2nd place on fresh tires. Cindric chased down Allmendinger and the two traded shoves into the braking zones before Cindric took the lead for good with two laps to go. Allmendinger finished a close second, and I deleted this original closing paragraph from this article:

Taking the checkers on Saturday was A.J. Allmendinger, who bounced back from a disqualification that classified him last in the July race at Daytona to score a victory at the scene of his lone Cup triumph in 2014.

It also appeared that Vinnie Miller had scored the second-straight last-place run at Watkins Glen for B.J. McLeod’s #78 team, a car driven last year by Tommy Joe Martins (who on Saturday made his first race for Motorsports Business Management). It was also going to be the fifth time the last-place finisher of the XFINITY race at Watkins Glen failed to complete a single lap, joining Elton Sawyer (1992), Brian Weber (2001), Chris Cook (2008), and Mike Wallace (2013).

But after post-race inspection, however, Allmendinger was again a story – his #10 had been disqualified for illegal rear end height. It was Allmendinger’s second-straight disqualification in as many starts, and dropped him to last place. This also bumped Chad Finchum out of the Bottom Five, but still handed Miller his first Bottom Five of 2019.

LASTCAR STATISTICS
*Allmendinger is the first driver to be disqualified from two NASCAR national touring races in the same season since David Pearson, who during the 1968 Cup Series campaign was classified last at the (Birmingham) Fairgrounds Raceway on June 8, then again at the Beltsville (Maryland) Speedway on September 13.
*This was also the first time the #10 was classified last in an XFINITY Series race at Watkins Glen. 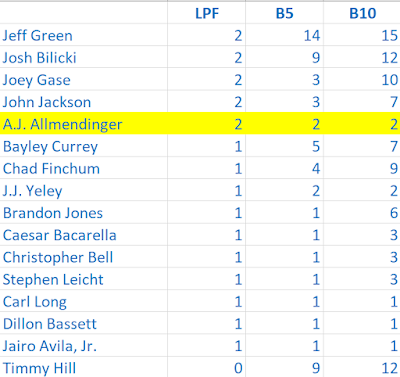