Norm Benning picked up the 14th last-place finish of his NASCAR Gander Outdoors Truck Series career in Saturday’s Corrigan Oil 200 at the Michigan International Speedway when his #6 H&H Transport Chevrolet fell out with engine issues without competing any of the 105 laps.

The finish also tied Benning with Johnny Chapman for the most last-place finishes in Truck Series history. Chapman has held sole possession of the record since June 7, 2013, when his #38 Chevrolet, fielded by current XFINITY Series team RSS Racing, had ignition issues at Texas. On that day, Benning had just five last-place finishes in the series and none since June 10, 2011 at Texas.

Since his most recent last-place finish, the fan favorite Benning has continued to confront the same struggles faced by many small teams in the sport. He was again flagged off the track at Kansas for not meeting minimum speed, then was parked at Chicagoland after just 35 of the 150 laps. His season-best has been a 17th in the crash-marred June race in Texas, where he came home three laps down. He was closest to a lead-lap run at Pocono, where he finished 22nd, just two laps down to race winner Ross Chastain. He was again one to watch at Eldora, where he improved ten spots from his last-place run in 2018 to finish 22nd once more.

According to part-time team member Robert Taylor, Benning would run the Eldora truck at Michigan, then again on the road course in Canadian Tire Motorsports Park. A run at Bristol was unlikely due to the large entry lists common to the event. H&H Transport would remain as sponsor of his black Chevrolet.

The preliminary entry list for Michigan stood at 31 drivers for 32 spots, but the short field was averted when Jordan Anderson, whose #3 Mission Ignition Systems / Bommarito.com Chevrolet was missing for the first time this year, confirmed he was bringing his black Chevrolet to the track. The list then grew by one more when Al Niece entered the #38 Niece Equipment Chevrolet with T.J. Bell, just as he had at Pocono. Bell’s entry increased the list to 33 drivers, meaning one would fail to qualify. That was decided before qualifying ended as Daniel Sasnett, driving Jennifer Jo Cobb’s second truck, spun in Turn 1 and backed hard into the outside wall, destroying the #0 Driven2Honor.org Chevrolet. This raised concerns at the Cobb camp as, according to Chris Knight, that truck was supposed to be Cobb's primary at Bristol and Mosport.

Benning started 32nd and last when he, like Sasnett, failed to complete a qualifying lap, but secured a starting spot based on a higher rank in Owner Points. Benning would also incur a redundant tail-end penalty, likely for repairs that kept the team from taking a timed lap. He’d run just seven laps in Happy Hour after skipping the first session, and was slowest in final practice, 3.167 seconds back of the lead and a half-second off the next-slowest truck of Jennifer Jo Cobb. Benning was joined at the rear by Matt Crafton, whose ThorSport team had to change engines on his #88 Chi Chi’s / Menards Ford, then qualified 12th, and Camden Murphy, who voluntarily surrendered 25th on the grid in Joe Nemcehek’s #87 NEMCO Motorsports Chevrolet.

On the break, Benning was apparently on the track in the last spot. When the green flag dropped, Benning was shown 5.353 seconds back of the leader with 31st-place Murphy 4.021 seconds back. However, Benning never completed that first lap as his interval wasn’t updated at the end of that circuit. He would not surrender the last spot for the rest of the race. This included the improper start penalties NASCAR handed to both Tyler Ankrum and Austin Wayne Self, who only fell as far back as 30th and 31st without losing a lap. Meanwhile, Murphy climbed to 23rd in the first twelve laps before he pulled into the garage to join Benning, finishing 31st in the final running order.

Finishing 30th was Ross Chastain, who stormed to the pole and dominated Stage 1, only to be undone on pit road after Johnny Sauter and Codie Rohrbaugh made contact as Chastain left his pit stall, steering Rohrbaugh into Chastain’s right-front. Chastain returned to the track briefly, but pulled off when he struggled to maintain a competitive pace. Rounding out the Bottom Five was Cory Roper, his #04 Preferred Industrial Contractors Ford back in action for the first time in two months. Roper broke a track arm bar and backed into the wall, ending his day.

Earning a strong 9th-place finish was Ray Ciccarelli and his CMI Motorsports team. A two-time LASTCAR headliner during his time driving “start-and-park” races for Jennifer Jo Cobb Racing, Ciccarelli had been quietly putting together steady runs. Driving the former Premium Motorsports equipment under Premium’s old team number #49, Ciccarelli ran 16th in the March race at Texas and had a solid 19th-place showing at Pocono, just one lap down to the leaders. He hadn’t entered Eldora, and instead turned his attention to Michigan. The effort paid off with Ciccarelli’s first-ever top-ten finish in NASCAR national series competition.

After he was added back onto the entry list, Jordan Anderson enjoyed one of his best runs since Texas, earning stage points with a 4th-place finish in Stage 2. He was still among the leaders with just three laps to go, when he was collected in a pileup triggered by Matt Crafton’s contact with Tyler Ankrum on the restart. Anderson finished 14th.

For the second-straight week, a driver who finished last in a Truck Series race won the following round. This time, it was Austin Hill, who scored his first-ever Truck last-place finish at Eldora, then won a hotly contested race in overtime.

LASTCAR STATISTICS
*This marked the fifth time the last-place finisher of the Truck Series race at Michigan failed to complete a single lap, joining Ryan McGlynn (1999), Rick Ware (2003), Chris Jones (2011), and Ryan Blaney (2013).
*This was the second last-place finish for the #6 in the Truck race at Michigan. The previous time was on August 27, 2016, when Ryan Ellis’ one-off driving Benning’s unsponsored Chevrolet ended with rear gear trouble after 1 lap of the Careers for Veterans 200. 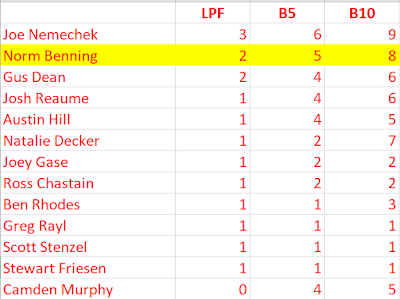