Jesse Little picked up the 1st last-place finish of his NASCAR Gander Outdoors Truck Series career in Thursday’s UNOH 200 at the Bristol Motor Speedway when his #97 Visit Kingsport / Skuttle Tight Ford was collected in a multi-truck accident after 2 of 200 laps.

It’s no coincidence that NASCAR has a new driver with the last name Little behind the wheel of #97. Jesse’s father Chad Little campaigned the number from 1996 into late 2000, first for Tex Powell and then for Roush Racing. The green-and-gold John Deere colors were one of the most recognizable cars on the Winston Cup circuit, propelling Little to six of his eight last-place finishes and a career-best runner-up finish to Mark Martin at Texas in 1998.

Jesse has been racing since he was seven, and in 2012 became the youngest-ever driver to start a NASCAR K&N Pro Series race at age fifteen. Two years later, he won his first K&N Pro Series East race at Loudon and finished a career-best sixth in points. The following season in 2015, Little and his family made the jump to the Truck Series, starting a part-time effort, JJL Motorsports. Now just eighteen, Little made his series debut at Dover and qualified 9th, only to be eliminated in an early crash. His first Top Ten came the next year at Iowa.

JJL switched from Toyota to Ford last year and improved even more, finishing in the Top 10 in six of their nine starts. The strong runs lifted Little to 19th in series points despite running less than half the schedule. The youngster also made his first two Cup starts that year, finishing 35th both times – at Kentucky for Premium Motorsports and at Bristol for Gaunt Brothers Racing.

This year, however, Little and JJL have struggled to find the same consistency. Coming into Bristol, the pair made seven Truck Series starts but finished no better than 13th at Texas in March. They also finished outside the Top 20 in three of their most recent four starts, including Dover, where the track bar failed and left them a disappointing 29th after a 13th-place qualifying run. Bristol, the scene of Little’s most recent Cup start, was a chance for a turnaround. The team debuted new sponsorship from the tourism board for Kingsport, Tennessee as well as returning backing from Skuttle Tight. On Monday, the truck made an appearance at golf's World Long Drive competition on the way to the track.

Little began the Bristol weekend running 35th of the 36 trucks in opening practice with just five laps complete, then climbed to 15th in Happy Hour. He then qualified 22nd with a speed of 122.905mph (15.612 seconds).

Little was originally among 37 entries who were set to attempt the 32-truck field, but the list shrank by one after Michigan last-placer Norm Benning withdrew his #6 H&H Trucking Chevrolet. This still left four teams on the outside looking in after qualifying: Codie Rohrbaugh in the #9 Grant County Mulch Chevrolet, Cory Roper in the #04 Preferred Industrial Contractors Ford, Timothy Peters in Ricky Benton’s #92 BTS Tire & Wheel Distributor / NAPA Filters Ford, and Lou Goss in his #74 Kramer Service Group / A&A Haulers Chevrolet.

Starting last was Angela Ruch, who returned to the series for the first time since June at Texas. She drove one of Al Niece’s entries, the #44 The Ruch Life Chevrolet, and although she’d made just six starts in 2019, the #44 had attempted every race, giving the team a superior rank in Owner Points to the four part-time efforts sent home after qualifying. She’d be joined at the rear by just one other driver – Sheldon Creed, whose #2 Chevrolet Accessories Chevrolet had started 24th, but was sent to the rear for unapproved adjustments following engine issues in qualifying. Coming to the start, either Creed or Ruch was still in the last row with a black truck, likely 29th-place qualifier J.J. Yeley’s #34 Colonial Countertops Chevrolet, starting alongside.

On the break, the last row showed a white and black truck in the final row. Ruch remained in last place for the start, but dropped Yeley to last at the end of the first lap, 8.166 seconds back of the lead. Yeley was still last on Lap 3 when the battle ended abruptly.

That time by, Little was running in a large pack of traffic when Gus Dean spun coming off Turn 4. Little checked-up and was rear-ended by a closing Sheldon Creed, knocking Little into a spin that backed him into the outside wall before he stopped next to Dean’s truck. The contact left Little sitting backwards in the middle of the track with heavy damage to the rear clip. While Dean, Creed, and the trailing Jordan Anderson in the #3 Capital City Towing / Sefton Steel Chevrolet all stopped at the scene, each started moving again and eventually cleared the minimum speed requirement under the Crash Clock. Little, however, remained stopped on track long enough to be the first to lose a lap. He was then brought to the garage, done for the night.

Yeley pulled his truck behind the wall shortly after the restart, and Ruch was eliminated in a crash down the frontstretch at the start of Stage 2. Finishing 29th was John Hunter Nemechek, whose #8 Berry’s Manufacturing Chevrolet was rear-ended in the opening stages, then collected in a pileup with Johnny Sauter on Lap 76. With heavy damage to the front and rear of his machine, Nemechek pulled behind the wall, done for the day. Jordan Anderson, who narrowly avoided serious damage in the Little accident, lost an engine past the halfway point and rounded out the Bottom Five.

For more on Jesse Little, check out his website here: https://jesselittle.com/JesseLittle.html

LASTCAR STATSTICS
*This marked the first ever last-place finish for the #97 in a Truck Series race. The number is also one of the rarest in the series. Prior to JJL Motorsports’ first start in 2015, the number had just seventeen starts, capped by a strong 7th-place finish by Jeff Choquette at Iowa in 2014.
*Little is tied for the fewest laps completed by a Truck Series last-place finisher at Bristol. Also completing two laps in the race was Johnny Sauter, now tied with Norm Benning for the most series last-place finishes. On August 22, 2012, Chapman’s #5 RSS Racing Chevrolet had electrical issues in the UNOH 200. 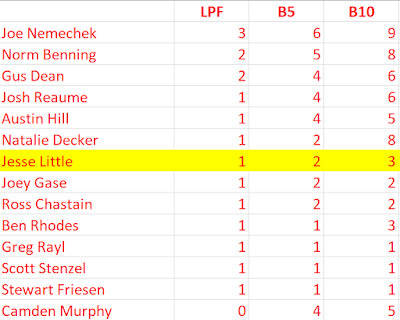