Ryan Klutt picked up the 2nd last-place finish of his NASCAR Pinty’s Series career in the Total Quartz 200 at Canadian Tire Motorsports Park when his #42 K-Line / Legendary Motorcar Chevrolet fell out with transmission issues after 2 of 53 laps.

The finish, which came in Klutt’s 10th series start, was his first of the season, and first in the series since May 22, 2016, when he trailed the season opener at the same track following a vibration after five laps.

Two years younger than his brother Gary, who ran double-duty with the Truck Series last weekend, Ryan has run almost exclusively at Mosport with a best finish of 11th in the 2015 season opener. He and Gary would also run the race as teammates with Gary in the #59 and Ryan in a #42 with numerals similar in style to Kenny Irwin, Jr.’s Team SABCO ride from the 2000 season. The team is owned by Gary and Ryan’s father Peter, himself a series veteran with 34 starts back to 2007, including the two most recent starts for the #42 team in the Mosport opener and Toronto.

Starting last in the field was 62-year-old series veteran David Thorndyke, running his own #67 Thorsons EVT Chevrolet for the first time since the season opener at the same track, where he finished last with early fuel pump issues. He held the last spot until Lap 3, when Klutt’s car suddenly stopped in Turn 1. The car had to be picked up by a flatbed, which brought the car back to the series garage in the infield. Klutt said he put the car into third gear and the transmission failed, stopping him out on the track. He also said he does plan to continue his yearly runs at Mosport next season.

Both of the Micks Racing entries ended up joining Thorndyke in the Bottom Five. Mark Dilley’s #64 Leland / Auto Value / NTN Bearings / Sharkbit Ford suffered suspension issues just eight laps after Klutt’s exit. Rookie driver T.J. Rinomato’s difficult season continued late in the event when he wrecked down the frontstretch, destroying the front of the #02 Torino Drywall / HOLR / Watson Building Supply Ford. Filling out the group were Chandler Smith, whose runner-up in the Bristol Truck Series race was followed by electrical issues on top of significant right-front damage to his #26 Qwick Wick / 828 Logistics Chevrolet, an Alex Labbe, whose Jacombs team was trying to fix an engine issue on the #36 Hotel Le Concorde / Silver Wax / Festidrag Ford but ran out of time, leaving them 22nd.

LASTCAR STATISTICS
*This marked the first last-place run for the #42 in the Pinty’s Series since Peter Klutt was listed “off track” with four laps remaining in the Ecko Unlimited 100 at Circuit ICAR in Quebec. 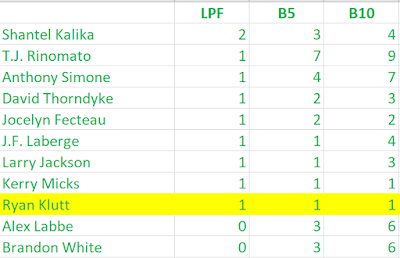