Reed Sorenson picked up the 17th last-place finish of his Monster Energy NASCAR Cup Series career in Sunday’s Go Bowling at the Glen at Watkins Glen International when his unsponsored #77 Spire Motorsports Chevrolet fell out with steering issues after 65 of 90 laps.

This year, Sorenson has continued to drive for Premium Motorsports, both under Jay Robinson’s effort and their partners, the #77 of Spire Motorsports. His first start of the year came in Las Vegas with Spire, finishing 36th in a car sponsored by The Mirage hotel and resort. He then began a partial season in Premium’s #27 Chevrolet, an “open” car entered at a variety of tracks, including Talladega, Kansas, Sonoma, and Loudon. His best run of the year came at Talladega, where he finished on the lead lap in 18th.

Watkins Glen would see Sorenson drive the #77 for the first time since Vegas, and the #27 not entered as it had during a 35th-place showing in Sonoma. While Justin Haley scored the team an upset victory in the rain-shortened Coke Zero Sugar 400 just last month, the team has continued to struggle for sponsorship, and has run no better than 31st since the day with Quin Houff driving. The team carried no primary sponsorship for The Glen and had very few contingency decals.

The car also struggled for speed. Sorenson didn’t participate in either practice session, and instead Justin Haley shook the car down for three laps in Happy Hour, turning in the slowest laps of the 34 who participated. When Sorenson took over the controls again for qualifying, he was again the slowest, turning in a lap of just 115.640mph (1 minute, 16.271 seconds), nearly seven seconds off the pole and nearly three off 36th-place qualifier Josh Bilicki in Rick Ware Racing’s #52 Token 4 Token Chevrolet.

On race day, Sorenson rolled off in last and was to be joined by Ryan Blaney, whose 19th-place #12 PPG Ford was sent to the rear for unapproved adjustments. Blaney never started in the back, however, as the first pace lap saw 34th-place Landon Cassill make an unscheduled stop in his #00 StarCom Fiber Chevrolet. Cassill rejoined the tail end of the field, and would start next to Sorenson when the green flag dropped.

When the green flag dropped, Sorenson and Cassill raced side-by-side into Turn 1 with Cassill getting the drive off. From there, Sorenson gradually lost touch with Cassill and the rest of the pack, dropping 20 seconds off the lead on Lap 3. On Lap 9, he was so far back that he was negotiating the Inner Loop while race leader Chase Elliott was at the stripe. On Lap 18, Elliott caught Sorenson entering the Inner Loop and put him a lap down. Sorenson took the wave-around at the end of Stage 1, but he didn’t pass the pace car until the backstretch, leaving him 21.1 seconds back of the lead on the restart.

On Lap 27, Parker Kligerman made an unscheduled stop for fresh tires after his #96 TRD 40th Anniversary Toyota spun off the nose of Daniel Suarez in the Inner loop. Sorenson passed Kligerman while he was on pit road, but Kligerman’s fresh tires allowed him to pass him back by Lap 30.

Back in last place, Sorenson was then told that, during his own green-flag stop, he’d sped down pit road and would have to serve a pass-through. The driver was surprised, saying he hadn’t triggered a red light during the stop. Sorenson served his penalty on Lap 31, but was caught speeding again in Sections 13 and 14, forcing him to come in a gain on Lap 33. But this time, he drove through too many pit stalls, incurring a third straight penalty. The moment Sorenson was told this, his power steering pump failed exiting the Inner Loop, blowing a plume of white smoke from the left-front wheel. Instead of serving the penalty, Sorenson pulled straight to the garage. “Did it all at once,” said the driver. “It didn’t leak out – it blew up.”

On Lap 44, the Spire crew had fixed the power steering issue and re-filled the fluid. Sorenson fired the engine and returned to the track, stopping for a moment at the garage exit before he hit pit road. He was now 14 laps down, and he and the other 36 starters were still running.

As the race wore on, a few other drivers found trouble. On Lap 53, Daniel Hemric pulled the #8 Caterpillar Chevrolet down pit road for extensive repairs on the rear of his car from backing into the Inner Loop fence. Hemric just managed to clear the Crash Clock, at one point needing to gain eight-tenths to reach minimum speed, but lost four laps in the process, dropping him to 36th. Worse still, the #8 was still smoking, and it took more work by the Childress crew to fix the problem.

Sorenson, meanwhile, remained 14 laps down and on the track in the final laps. If he was still running with 10 laps to go, he would secure last place no matter what anyone else did. But with just 12 laps to go, another challenger entered the battle. The #47 Kroger Chevrolet of rookie Ryan Preece pulled into the garage area around Lap 74. The crew pulled the rear tires off and examined the underside of the car with a flash light. Mike Raphael indicated this was due to a broken axle, which happened too late for the team to return to the track. This put Preece in position for his first Cup Series last-place finish. If Sorenson stayed on the track without losing another lap, he would pass Preece for 36th with just two laps to go.

But by Lap 82, with just eight laps to go, Sorenson had pulled into the garage a second time, and this time was done for the day. The car was shown “unavailable” on RaceView soon after. Sorenson had halved his deficit to Preece, closing to within seven laps, but would advance no further. Preece took home 36th followed by Hemric in 35th.

Finishing 34th was Corey LaJoie, who donated a month of his salary to promote his favorite charity, Samaritan’s Feet. More than $100,000 was raised and hundreds of names were hand-written onto his black #32 Ford. But the car dropped a cylinder in the late stages, and ultimately pulled off the track with engine trouble.

Rounding out the Bottom Five was Cody Ware, back in a Cup Series car for the first time since Sonoma. His new-look #51 Jacob Companies Chevrolet encountered transmission issues, according to the team, but managed to make it to the finish without third gear.

Turning heads again on Sunday was Matt DiBenedetto, who has now finished in the Top 10 in every other race since his career-best 4th-place showing at Sonoma. This time, he drove the #95 Procore Toyota to a 6th-place run, moving both driver and team ever closer to a possible first victory. 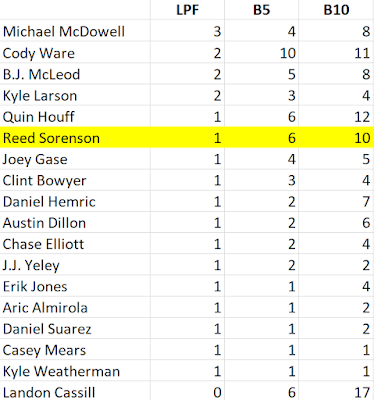