ARCA: Late entrant Wayne Peterson does not sling any dirt at Springfield

Wayne Peterson finished last for the 42nd time in his ARCA Menards Series career in Sunday’s Allen Crowe 100 at the Illinois State Fairgrounds when his #0 Ford did not complete any of the race’s 100 laps before retiring with brake problems.

The finish came in his 107th series start and was his first since Gateway, five races ago.

Once again, Wayne Peterson Racing rolled out two cars for the event. Originally, Buck Stevens was slated to drive the car, but by later in the week, the entry list had been updated to show Peterson in the 0. Up-and-coming driver Tim Richmond continued to diversify his racing portfolio, as the road racer continued his maiden stock car voyage with an appearance on dirt in the #06.

The dirt also brought out some familiar faces to the ARCA dirt scene. “Dirt ringers” Kelly Kovski, Ryan Unzicker and Logan Seavey entered, all three in the same machines they drove in this race a year ago: Seavey in the #20 for Venturini Motorsports, Unzicker in the Hendren Motorsports #24, and Kovski in the Allgaier Motorsports #16. It was a local affair for Unzicker and Kovski, who both hail from Illinois. Will Kimmel drove his team’s flagship entry for the first time this year. Some part-timers also joined the effort. Dale Shearer entered in a second Kimmel Racing car, Bobby Gerhart returned after somewhat of a quiet summer stretch, Eric Caudell continued his partial schedule, and Fast Track Racing entered Richard Doheny in the #1 car and Mike Basham in the #11 machine.

Rolling off on the grid last after qualifying was Peterson, whose lap of 51.7 seconds was twelve seconds slower than Shearer’s next-slowest lap and more than eighteen seconds off of Seavey’s pole time. Coming to the green, Peterson was a noticeable distance behind the field in a white car with rookie stripes on it. The car, however, stayed clean of a first-lap crash with Eric Caudell. The incident relegated Caudell to the garage after officially completing a mere one lap, filling two of the bottom five slots extremely early in the race. Tommy Vigh Jr., Basham, and Shearer filled out the Bottom Five with overheating problems, a common issue with old chassis at dirt tracks. This issue was potentially compounded by a wetter track surface for a majority of the race after an early red flag for rain. Give a call, however, to current LASTCAR championship runner-up Richard Doheny, who finished for the second time in his 34-race ARCA career, three laps down in 12th.

Looking to the LASTCAR championship battle with a mere four races left in the season, the drivers’ championship is still wide open, with Peterson now one of three drivers tied at two finishes apiece. Brad Smith currently leads on a Bottom Ten tiebreaker, 13-12 over Doheny, as both are tied with ten Bottom Five appearances. Ford leads all manufacturers with eight and has all but wrapped up the title; even if Toyota finished last in all four remaining races they could only tie Ford for the lead. As for the owners title, Wayne Peterson Racing holds a 4-3 lead over Fast Track Racing, but there is still a lot of time for things to seesaw one way or the other. 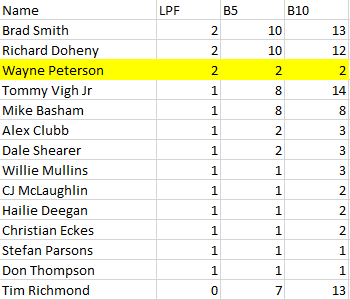