XFINITY: J.J. Yeley’s return to XFINITY action a short one in Iowa

J.J. Yeley picked up the 7th last-place finish of his NASCAR XFINITY Series career in Saturday’s U.S. Cellular 250 at the Iowa Speedway when his unsponsored #38 RSS Racing Chevrolet fell out with ignition trouble after 5 of 250 laps.

While remaining a part-time driver in the Cup Series for Rick Ware Racing, Yeley reunited with RSS Racing this past weekend for the first time since last fall at Homestead. The opportunity came about both from Jeff Green’s recovery from surgery and a stand-alone weekend for the series in Iowa. Yeley would drive a #38 Chevrolet alongside an unsponsored #93 for Camden Murphy. While Yeley’s car was the familiar black like Ryan Sieg’s flagship #39, Murphy’s #93 ran a white scheme with red numbers.

Yeley made a statement in his return to the series, putting up the 12th-fastest time of 36 drivers in opening practice before not participating in Happy Hour. In qualifying, he secured the 18th starting spot with a speed of 130.181mph (24.197 seconds).

Starting 38th and last on the grid was Ryan Repko, whose #01 The McLain Group Chevrolet was the only driver on the entry list to not complete a qualifying lap. The issue that prevented him from running appeared to carry over onto the grid as his car didn’t fire at the command, and only got rolling about a minute later. Repko still secured his starting spot despite a 39-car entry list as Mark Meunier, the 55-year-old ARCA driver named to drive Rick Ware Racing’s #17 Chevrolet on Friday, wrecked in Turn 3 during his warm-up lap in qualifying. The wreck caused Meunier to complete a return lap of just 69.595mph (45.262 seconds), nearly 22 seconds off Christopher Bell’s pole speed.

Repko incurred a redundant tail-end penalty prior to the race for unapproved adjustments, the same penalty handed to his JD Motorsports teammate Garrett Smithley, who put the #0 Chevrolet 35th on the grid. At least two other drivers fell to the rear voluntarily – 34th-place Morgan Shepherd in the #89 VisOne RV Chevrolet and Yeley. Shepherd had an unusual qualifying lap of his own when the crew accidentally left the maneuvering steering wheel on the roof of the car, causing it to fall onto the track during his lap. The issue didn’t slow the veteran any as he managed to turn the fastest lap of the five drivers relying on Owner Points.

When the race started, Shepherd was last across the stripe, 5.030 seconds back. He passed 37th-place Mike Harmon in the #74 Chevrolet, but Harmon moved back past by the end of Lap 2. Shepherd next raced past the #66 LasVegas.net Toyota of 36th-place starter Stan Mullis, who gradually lost time to the cars in front of him. Mullis was 10.971 seconds back of the leader when Shepherd raced past and was six-tenths of a second back of the #89 after the fourth circuit.

Mullis was still last after the sixth lap, when Yeley’s car was first to pull behind the wall with a mechanical issue. On Lap 37, NASCAR officials confirmed the #38 was out of the race, citing an ignition failure. That same time by, K&N Pro Series West standout Will Rodgers, making his NASCAR national touring series debut, pulled into the garage area seven laps down. Driving Brandonbilt Motorsports’ second car, #68, with backing from the American Liver Foundation, Rodgers would go on to finish 28th, 39 laps down.

First of the cars Rodgers passed was eventual 37th-place finisher Austin Cindric. Cindric put the #22 Money Lion Ford 8th on the grid but scuffed the wall on the first lap and was eliminated in an accident with Noah Gragson. For both Cindric and Yeley, it was their first Bottom Five of 2019. Shepherd finished 37th, returning from an early trip to the garage to pass Cindric. Rounding out the Bottom Five were Timmy Hill in Motorsports Business Management’s #13 Toyota and Mike Harmon’s unsponsored #74 Chevrolet.

Saturday also saw a pair of impressive finishes. Shane Lee finished 7th in just the sixth-ever start for H2 Motorsports. Returning to the track where the team made its debut in June, Lee’s previous best with the team was a 16th in Kentucky. Also turning heads was Ray Black, Jr., whose 11th-place finish in SS-Green Light Racing’s #07 Isokern Fireplaces Chevrolet matched his season-best run at Las Vegas.

LASTCAR STATISTICS
*This was Yeley’s second last-place finish in an XFINITY race at Iowa. The other also occurred while driving for RSS Racing on June 17, 2018, when he pulled the last-place weekend sweep along with the Truck Series. 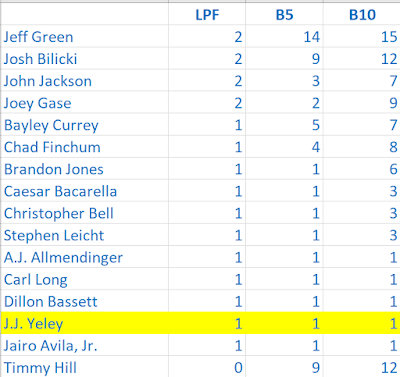