Stewart Friesen picked up the 2nd last-place finish of his NASCAR Gander Outdoors Truck Series career in Saturday’s Gander RV 150 at the Pocono Raceway when his #52 Halmar International Chevrolet triggered a multi-truck accident and did not complete any of the 60 laps.

While Friesen continues his search for an elusive first Truck Series victory, he has steadily become one of the most consistent drivers on the circuit. Heading into Saturday’s race, he’d come within one Top Five of matching his season total in 2018, leading the point standings for two weeks before settling 34 points back of leader Grant Enfinger. He’d also managed to finish inside the Top Twenty in every race, failing to finish just two of the first thirteen rounds, and rode a streak of four consecutive top-five finishes.

Friesen had another fast truck at Pocono, where he ran 4th in opening practice, 12th in Happy Hour, and qualified 3rd with an average speed of 170.661mph (52.736 seconds). It marked the sixth time in the season’s fourteen races that Friesen qualified inside the Top 5, including his 3rd and most recent pole in Martinsville.

While Friesen was one of 31 entrants on the preliminary list, a full field of 32 was secured by Friday as Al Niece rolled off a black #38 Chevrolet for T.J. Bell, who would thus make his first series start since Kansas. While Bell qualified a solid 21st, the 32nd and final spot went to Jennifer Jo Cobb in her #10 Driven2Honor.org Chevrolet. Cobb, nearly seven seconds off Austin Hill’s pole lap, started alongside new teammate Daniel Sasnett, who moved from the Reaume Brothers Racing team to drive the 31st-place #0 Chevrolet. Radio traffic revealed NASCAR officials had difficulty finding Sasnett’s spotter until three minutes before the command to start engines.

Two of the Reaume trucks were among the three sent to the rear before the race for unapproved adjustments – Josh Reaume himself in the #33 sponsored for a second straight year by the LeHigh Valley Phantoms Hockey team and Mason Massey in a #34 Toyota. The third truck sent to the rear was 15th-place qualifier Ben Rhodes, whose #99 Ford debuted a “throwback” black-and-orange scheme to debut a new three-race deal with returning NASCAR sponsor Havoline motor oil. Sasnett voluntarily fell behind the trio prior to the start, as did 28th-place Bryant Barnhill in the third Reaume truck, #32, and 19th-place Joe Nemechek in his #87 Chevrolet.

The green flag waved with Nemechek in last, 4.149 seconds back of the lead, when trouble broke out in the very first corner. Friesen was already under attack for the 3rd spot and was running the inside lane alongside GMS Racing teammates Sheldon Creed and Brett Moffitt. Near corner apex, Friesen’s truck broke loose and spun up the track, forcing the rest of the field to scatter. As the gap closed between Friesen’s truck and the outside wall, both Tyler Ankrum and Jordan Anderson squeezed through. Anthony Alfredo, following the pair in his #15 Steelsmith Toyota, wasn’t so fortunate. The two made contact, tearing up the driver’s side of Alfredo’s truck, which just managed to make it to pit road.

The accident dropped Alfredo to last by the end of the first lap with Friesen in 31st. Alfredo managed to return to the track after two laps, dropping Friesen to last. The damage proved too much to repair, and Friesen was the first retiree from the race, his first Bottom Five of 2019. At the same time, Alfredo incurred two penalties for improper fueling and pitting too soon. Despite the effort, Alfredo didn’t clear the “Crash Clock,” and was officially out under the damaged vehicle policy. He finished 31st.

Friesen’s wreck dropped him to 4th in the overall point standings, but most critically 8th in the Playoff rankings, just 13 points ahead of Harrison Burton for the final spot.

Joe Nemechek lost nine laps early when he went to the garage for a mechanical issue but returned to action in Stage 2 before returning a second time on Lap 33. This moved him from 30th to 28th at the time of his second turn behind the wall, ahead of both 29th-place Sasnett and 30th-place Austin Hill in the #16 United Rentals Toyota. Sasnett had pulled off the track as a “start-and-park” for the Cobb team while polesitter Hill endured his second-straight mechanical issue in as many races, this time a burned clutch.

Turning heads in the late stages of Saturday’s race was Tony Mrakovich, making just his second series start. Unable to qualify his own #43 Street Stores Hardware Chevrolet earlier this year, Mrakovich was making his second start for NEMCO Motorsports, teamed with Joe Nemechek’s #87 in the #8 Chevrolet. Mrakovich, who finished 15th and 21st in his two ARCA Menards Series starts at Pocono, came home a strong 12th. It was the best run by NEMCO’s #8, often delegated to a “start-and-park” due to lack of funding, since the Daytona opener, where Angela Ruch finished a season-best 8th. 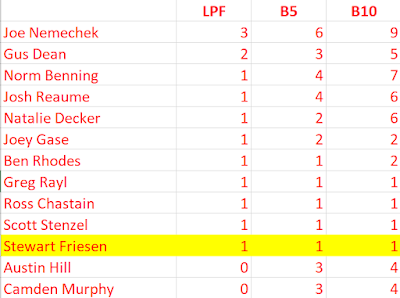