Joe Nemechek picked up the 8th last-place finish of his NASCAR Gander Outdoors Truck Series career in Thursday’s Buckle Up in Your Truck 225 at the Kentucky Speedway when his #87 D.A.B. Constructors Chevrolet fell out with a vibration after 17 of 150 laps.

The finish extended Nemechek's lead in the 2019 LASTCAR Truck Series Championship over Gus Dean and has put him in position for a title defense with ten races to go.

Nemechek’s last-place finish gained added significance on Thursday because of who took the checkered flag. Since his most recent last-place run in Charlotte, Nemechek had split time in the underfunded #87 with Tyler Ankrum, who saw a sponsorship deal fall through despite a season-best third-place finish in Texas for DGR-Crosley. Ankrum would drive the #87 at both Iowa, where he was the first truck out but averted a last-place finish after Ross Chastain’s disqualification, and at Gateway, where he ran 30th. Thanks to continued support from sponsor Railblaza, Ankrum reunited with DGR-Crosley at Chicagoland, where he finished 13th while Nemechek ran 28th. Ankrum then pulled off the victory on Thursday in just his 12th series start, leading 40 laps including the final two after race leader Brett Moffitt ran out of fuel.

Nemechek’s truck also showed speed in Kentucky, ranking 19th of 34 trucks in opening practice, 20th of 34 in Happy Hour, and qualified 18th with a speed of 177.369mph (30.445 seconds). The two trucks that missed the show belonged to owner-drivers Ray Ciccarelli, returning to action in his #49 CMI Motorsports Chevrolet and Norm Benning in the #6 H&H Transport Chevrolet. Ciccarelli was faster than three of the five drivers locked in on Owner Points. Jennifer Jo Cobb was originally listed as a DNQ until NASCAR revised the results. Cobb’s #10 Driven2Honor.org Chevrolet started 31st.

Starting 32nd and last was Stewart Friesen, whose weekend took an early step backward after NASCAR confiscated his primary #52 Halmar International Chevrolet for being “unacceptable.” Bob Pockrass reported attention steered toward part of the floorboard of the truck’s passenger side which was too high. Friesen’s backup truck could only muster a speed of 164.479mph (32.831 seconds), slowest in the session. The Halmar team recovered in a big way, charging to Friesen’s sixth runner-up finish in the series and second in a row in this race.

Friesen incurred a redundant tail-end penalty at the start for his backup truck, but would not start in the final spot. Coming to the green, both Nemechek and teammate Camden Murphy in the #8 NEMCO Chevrolet dropped to the rear with Jennifer Jo Cobb’s #10 passing Murphy to the inside just seconds before green. Both Murphy and Green ran side by side as the field drew away from them in the first corner. With 30 to go in Stage 1, both NEMCO trucks had worked their way past Cobb, who that time by became the first to lose a lap. A trip to pit road ended up costing her another six circuits, putting her seven down with 20 to go, while Murphy and Nemechek ran 25th and 26th. Cobb went on to run at a reduced speed and ultimately passed Nemechek, who pulled behind the wall under green.

The 31st spot went to Austin Hill, whose #16 Toyota Tsusho Toyota pulled down pit road with seven to go in Stage 1 with a blown engine, ending his night. Both Jordan Anderson in the #3 Bommarito.com / Knight Fire Protection Chevrolet and Spencer Boyd in the #20 Record Rack Chevrolet were collected in a Turn 1 tangle with Natalie Decker, leaving them 29th and 30th. For Anderson, it was his first Bottom Five of 2019. Murphy’s night in the #8 left him 28th after engine trouble under the ensuing caution.

In addition to Tyler Ankrum, several other underdogs enjoyed strong finishes in Kentucky.

Last week, Dylan Lupton returned to the Truck Series for the first time in three years and finished a strong 10th with a new third team from the DGR-Crosley effort. This week, driving the team’s #15, Lupton improved once more with his first series top-five finish, coming home 5th. This was Lupton’s first Top Five in a combined 43 starts across NASCAR’s top three series.

Austin Wayne Self came home 6th on Thursday in the #22 AM Technical Solutions / Go Texan Chevrolet, the second-best finish of his career behind a runner-up performance in the 2017 season opener at Daytona.

Spencer Davis reunited with the Rette Jones Racing team this week and promptly gave the team its first top-ten finish in just its sixth series start, coming home 8th in the #11 All Pro / Tower Sealants Toyota. It was one spot short of Davis’ own best finish in the series, when he ran 7th for Kyle Busch Motorsports in the 2018 Daytona opener.

Jeb Burton made his first Truck Series start of the season in Niece Motorsports’ #44 Alsco / State Water Heaters Chevrolet and finished 9th, his first top-ten finish in the series since 2014 at Texas.

Just outside the Top Ten in 11th came Tyler Hill, who picked up the best series finish for the start-up Hill Motorsports team. Tyler, who made just his third series start in a split campaign with brother Timmy Hill, overcame minor damage to the rear bumper of his #56 Southern Freight Services Chevrolet from an incident in opening practice.

Codie Rohrbaugh’s 14th-place finish was a big turnaround for his CR7 Motorsports team, which has either crashed or failed to qualify in all his previous 2019 attempts. Rohrbaugh’s #9 Grant County Mulch Chevrolet took the checkered flag as the first truck one lap down. 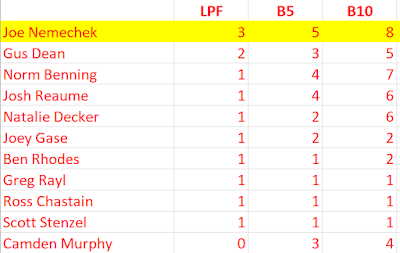