Daniel Hemric picked up the 1st last-place finish of his Monster Energy NASCAR Cup Series career in Sunday’s Foxwoods Resort Casino 301 at the New Hampshire Motor Speedway when his #8 Okuma Chevrolet fell out with crash damage after 110 of 301 laps.

A 28-year-old from Kannapolis, North Carolina, Hemric worked his way from go-karts and Legends cars to a part-time campaign in the modified ranks. He also finished 12th in his lone ARCA Menards Series start at Daytona in 2015. That same year saw him go full-time in the Truck Series for team owner Bob Newberry, building on three prior starts with a best of 12th in the 2014 finale at Homestead. With a best of three 4th-place finishes under his belt, Hemric joined Brad Keselowski Racing the next year, where he finished 6th in the series standings. In 50 series starts, he never once finished last.

The 2017 season saw Hemric join forces with Richard Childress Racing for the first of two full-time season in the XFINITY Series. Five poles and five runner-up finishes followed. Both years, he fought his way all the way to the Championship Four in Homestead, where he ranked 4th in 2017 and 3rd just last year. Out of 66 combined series starts, Hemric again never once finished last.

This year marks Hemric’s first full season in the Cup Series, again driving for RCR, and carrying the #8 previously held by Dale Earnhardt, Inc. until their merger and closure in 2009. After qualifying a Childress car for Paul Menard in 2017, he turned heads in his only two starts last year, qualifying 22nd in his series debut at Richmond and 11th in the first-ever Roval race. Joining teammate Austin Dillon as part of RCR’s 50th Anniversary, Hemric began the year with a top-five run at Atlanta undone by a late tire issue, then a series-best 5th at Talladega. He also joined in with Bubba Wallace and Corey LaJoie tossing footballs to fans in the stands during rain delays. Following a 24th-place finish in Kentucky, he sat 24th in points, and still without a last-place finish.

Starting 37th and last was a frustrated Alex Bowman, who endured a challenging weekend leading up to the race. He’d lost his primary car in qualifying, when the driveshaft ripped free just past the stripe, damaging the transmission tunnel and stopping him in Turn 1. His backup car was also gone, wrecked in Turns 1 and 2 during Happy Hour. The car that rolled out to the grid had yet to turn a lap. It was Jimmie Johnson’s backup car, the decals peeled off and replaced with his own. This gave a new look to the #88 Axalta Chevrolet as it now had a black base in place of the familiar dark blue. This not only put Bowman last on the grid as the only driver without a qualifying time, but incurred a redundant tail-end penalty for the backup car. On top of all this, the car didn’t make it onto the grid until a whole hour after the rest of the field as it took a second go-round to clear inspection.

Several other drivers found trouble in the lead-up to the race with another four drivers sent to backup cars following separate single-car accidents in practice: 15th-place Kyle Larson, 22nd-place William Byron, 23rd-place Denny Hamlin and 26th-place Ryan Newman. None of the backup cars started in the rear, however, as another five drivers who qualified 32nd through 36th also dropped to the rear: Ross Chastain, Reed Sorenson, Quin Houff, Andy Seuss, and Austin Theriault. Seuss and Theriault were making their Cup debuts, each as teammates at Rick Ware Racing. Chastain would take the last spot with new sponsorship on his #15 from YavarsBranding.com.

On the break, Chastain held last with Houff and Seuss in front of him. The two cars made contact, and Chastain closed the gap to complete Lap 1. The run continued through Turns 1 and 2, where Chastain pulled low with Seuss in the middle and Houff high, passing both cars. Houff edged Seuss in the process, putting his #51 Jacob Companies Ford in last. Theriault then slipped to 36th in the #52 Bangor Saving Bank Chevrolet and the two began a race of their own, Seuss in Theriault’s tire tracks. Both gradually lost ground, and race leader Kyle Busch caught the pair off Turn 4, then split them in the middle lane to put each a lap down. Seuss lost a second lap on the 31st circuit.

On Lap 35, Ty Dillon entered the last-place battle when a tire issue forced him to make an unscheduled pit stop in the #13 GEICO Military Chevrolet, dropping him two laps down. The fresh tires allowed Dillon to catch up to the tail end of the field, and he caught and passed Seuss for 36th on Lap 38. Ty’s brother Austin Dillon then found trouble in the #3 Behr Ultra Chevrolet when a tire blew in Turn 4, stuffing his car into the outside wall. An extended stay on pit road dropped Dillon off the lead lap. Behind him, last place swapped between Theriault and the #77 #MyTrackMyRoots Chevrolet followed each other down pit road.

Theriault retook last on Lap 51 coming to the restart, but engaged in a spirted side-by-side battle with Houff for position. Theriault had a good run on the inside, but Houff maintained the drive off. On Lap 64, Theriault nearly got by before Houff sped past off Turn 2, and again Kyle Busch caught the pair, splitting them in the middle lane as each were put three laps down. It wasn’t until the 67th time by that Theriault finally cleared the #77, putting Houff to last for the first time. He didn’t hold it long as Austin Dillon slowed in Turn 2 with another flat tire, sending him to pit road. Dillon took last when he lost a third lap on pit road on Lap 71, then returned to action five circuits back. Still another stop for the #3 came on Lap 78, dropping him eight laps down as the crew tried to make repairs to the damaged right-front corner. Yet another tire let go on Lap 94, and the #3 pulled into the garage that time by for extended repairs. The crew looked over the toe end and found the sway bar was seriously bent.

As the Richard Childress Racing crew reassembled Dillon’s suspension, trouble broke out on the track. Chase Elliott’s #9 Kelley Blue Book Chevrolet broke the water pump, spraying fluid in Turns 1 and 2. Directly behind them were Hemric and the #41 Haas Automation Ford of Daniel Suarez. The two cars made contact and spun, drawing the caution as Elliott made his way to pit road. It was during this caution on Lap 113 that Elliott returned to the track, now 27 laps back. At the same time, both Hemric and Elliott were dropping down the rankings 2 laps down, each with the hood up on their Chevrolets. This proved significant as both Hemric and Elliott soon dropped to 35th and 36th with neither having scored a last-place finish in Cup.

The tie was broken on Lap 120, when Hemric pulled into the garage 9 laps down and took 36th from Elliott. Elliott then returned to the race two circuits later, 11 laps down to the leader. Hemric’s car disappeared off RaceView on Lap 127, was declared out of the race around Lap 134, and on Lap 138 Austin Dillon finally passed his teammate, dropping the #8 to last. Elliott went on to finish 29th.

Finishing 36th was Ricky Stenhouse, Jr., whose #17 Fastenal Ford clobbered the Turn 2 wall on Lap 138. Theriault finished 35th after the rear gear failed on his #52 just short of the two-thirds mark. The 34th spot fell to David Ragan, whose #38 Compressor World Ford spent an extended stay behind the wall late before he returned to finish forty laps down. Rounding out the group was Kyle Larson, whose backup #42 McDonald’s Chevrolet was collected in two separate accidents.

LASTCAR STATISTICS
*This marked the first last-place finish for car #8 in a Cup Series race since November 11, 2007, when Dale Earnhardt, Jr.’s Budweiser Chevrolet crashed after 118 laps at Phoenix. Junior also scored the number’s only two previous last-place runs at Loudon – the first of the driver’s career on July 11, 1999 and another on July 16, 2006. 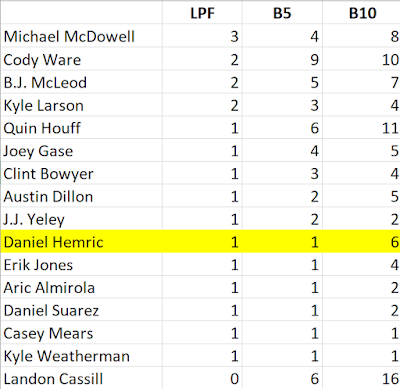 It says Hemric failed to qualify at Texas, but didn't he just practice and qualify the car for Paul Menard?

Yes you are correct - my mistake.