Chase Elliott picked up the 1st last-place finish of his Monster Energy NASCAR Cup Series career in Sunday’s Gander RV 400 at the Pocono Raceway when his #9 NAPA Auto Parts Chevrolet was involved in a single-car accident after 83 of 163 laps.

Prior to Sunday, Elliott had the second-most Cup starts of any driver without a last-place finish, trailing only Brad Keselowski (0-for-362 through Sunday). To put his record in perspective, Chase’s famous father Bill Elliott scored his own first last-place finish in just his second series start at Atlanta on March 21, 1976. This was just one of many metrics to measure the younger Elliott’s success in the Cup Series.

Last season, Elliott broke through with his long-awaited first Cup Series win, prevailing in a tight contest with Martin Truex, Jr. at Watkins Glen with his father as spotter. Two more wins came in the Playoffs at Dover and Kansas, keeping him in championship contention all the way until the penultimate round, where he was collected in a late-race wreck with Kurt Busch, leaving him 23rd. After a slow start to the 2019 season, Elliott bounced back at Martinsville, where he was the only driver to challenge a dominant Brad Keselowski, then won at Talladega to kick off a streak of five straight top-five finishes.

But, starting with a 20th-place finish at Michigan, the summer hasn’t been so kind to the young driver. He very nearly finished last at Sonoma, where he lost oil pressure just moments after J.J. Yeley’s Rick Ware Racing entry pulled out of the race. He then ran 11th at Chicagoland, was collected in “The Big One” at Daytona for a 35th-place run, 15th after a flat tire in Kentucky, and was 29th in Loudon after a slipped belt cost him 11 laps. Pocono, where his top-five streak ended in June, would hopefully be better.

But Elliott’s weekend didn’t get off to the best start when he spun in Turn 3 during opening practice and backed into the outside wall, sending him to a backup car. Elliott still managed to rank 14th in that session, then shook down the backup in Happy Hour with the 26th-best lap of 35 drivers. He qualified just 23rd on the grid with a lap of 170.300mph (52.848 seconds), but jumped up to 18th on Sunday morning after nine drivers failed pre-race inspection.

Since Elliott was sent to a backup car, however, he too would incur a tail-end penalty once the cars rolled onto the track. Joining him were another two drivers – 23rd-place qualifier Kyle Larson, who nosed his #42 Credit One Bank Chevrolet into the inside wall off Turn 2 during opening practice, and Bubba Wallace, who had a new engine in his #43 Victory Junction Gang Chevrolet after starting 21st. Elliott, Larson, and Wallace didn’t fall all the way to the rear, however, as Sorenson and Chastain remained in the final two spots during the pace laps.

Coming to the green, Sorenson was running by himself at the back of the field as Chastain leap-frogged Theriault, putting the #52 directly in Sorenson’s path. Sorenson pulled to the inside of Turn 1 and ran side-by-side before completing the pass into the Tunnel Turn. The next time by, Sorenson had also passed Quin Houff in Spire Motorsports’ #77 Rapid City Rush Chevrolet, and Theriault now began to catch Houff for 37th.

By Lap 6, Theriault was still last and more than 16 seconds off the lead when 11th-place starter Brad Keselowski made an unscheduled stop. Running near the leaders, Keselowski had slammed the wall off Turn 3, damaging the right-rear of his #2 Alliance Truck Parts Ford. His sluggish stop the next time by put him in last, 50.9 seconds back of the lead, and with polesitter Kevin Harvick within less than two seconds of lapping him. Thus, for the third time this month, Keselowski was again in position to score his first-ever Cup Series last-place finish. Against all odds, Keselowski managed to keep the interval between he and Harvick about the same, and by Lap 15 he had caught and passed Theriault off Turn 2, dropping the #52 to last once more. Harvick passed Theriault by the time the two reached the start / finish line, and the rookie was now the first driver one lap down.

Next to challenge for last place was Matt Tifft, who qualified 22nd in his #36 Surface Sunscreen Ford. Frustrated with his car’s handling, Tifft lost a lap on a pit stop, then was caught speeding down pit road, forcing him to serve a pass-through penalty and go a second lap down. Houff then took a turn in last on Lap 28 after he brought the #77 in for a lengthy pit stop. Theriault and teammate Josh Bilicki in the #53 Token 4 Token Chevrolet swapped last place during their own stops, where Bilicki beat Theriault off pit road. Fresh tires allowed Theriault to catch Sorenson on Lap 35, but he was five spots and one lap behind the #27, so the pass wasn’t for position. That changed on Lap 39, when Sorenson fell onto the same lap as Theriault, who passed Sorenson on track. Sorenson remained in last, three laps down, when Stage 1 ended on Lap 50. At the same time, Brad Keselowski had managed to stay on the lead lap and climbed from last to 24th.

When Stage 2 began, Sorenson stayed in touch with new 37th-place runner B.J. McLeod in the primary Rick Ware Racing entry, a new-look green-and-white version of the #51 Jacob Companies / Pocono Organics Ford. McLeod passed Theriault for position, and Sorenson got a big run off Turn 2 that closed the gap between himself and Theriault’s #52. The result was a side-by-side battle for last place that lasted from Turn 3 until the entrance of Turn 2 where Theriualt, running the high lane, backed off and reclaimed last place.

On Lap 65, with rain in the area, Sorenson and Theriault waged war once more. While faster traffic weaved between the pair, Theriault caught a whiff of the draft from Ty Dillon’s #13 GEICO Military Chevrolet, causing him to close the gap on Sorenson. This put the two cars nose-to-tail in Turn 2, where he remained for more than a lap. On Lap 68, Theriault was all over Sorenson in Turn 1, where the #27 slid up the track, drawing the two cars even once more. This time, it was Theriault who prevailed into the second corner, dropping Sorenson back to last. The next time by, Sorenson lost a fourth lap, but with Theriault not far in front, it looked like their battle would continue.

But on Lap 84, trouble found Chase Elliott. Heading into the same third corner that claimed his primary car, the right-front tire blew, sending him hard into the outside wall. The right-front and right-rear suspension appeared seriously damaged, and the car immediately limped behind the wall, done for the day under the “Crash Clock.” Elliott’s car was listed “unavailable” on RaceView when he was still shown 26th, one lap down. He officially took last place from Sorenson on Lap 89.

Sorenson ended up 32nd, two positions ahead of Theriault, who rounded out the Bottom Five as the last car under power. Hard crashes eliminated both 37th-place Ryan Preece, who skated his #47 Kroger Chevrolet into the outside wall, and 36th-place David Ragan, who was turned into the frontstretch wall in his #38 MDS Transport Ford without drawing a caution. What did draw a yellow was 35th-place Bilicki, whose #53 broke a driveshaft off the first corner, causing his car to stop on the apron with just six laps to go. The resulting caution ended a fuel mileage race between Denny Hamlin, Martin Truex, Jr., and Kevin Harvick, which Hamlin went on to win in overtime.

LASTCAR STATISTICS
*This marked the first time car #9 has ever finished last in a Cup race at Pocono. In fact, the number hadn’t finished last in any Cup Series points races since March 22, 2015, when Sam Hornish, Jr.’s Medallion Bank / Mercury Marine Ford finished under power, 54 laps down, during the Auto Club 400 at Fontana. 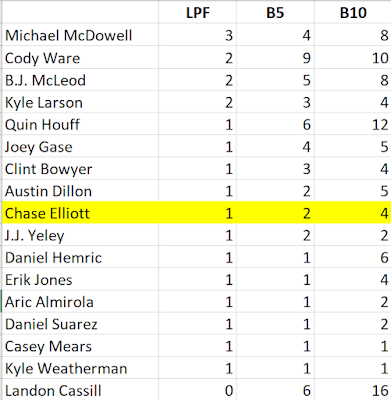