B.J. McLeod picked up the 3rd last-place finish of his Monster Energy NASCAR Cup Series career in Saturday’s Quaker State 400 presented by Walmart at the Kentucky Speedway when his #52 Jacob Companies Chevrolet fell out with electrical issues after 110 of 269 laps.

With the finish, McLeod jumps to third in the 2019 LASTCAR Cup Series rankings, joining a tight battle for second overall between Cody Ware and Kyle Larson. McLeod trails Ware on a bottom-five tiebreaker, 9-5. Michael McDowell remains the leader as the only three-time last-place finisher this season.

McLeod has remained busy between all three of NASCAR’s top divisions, both as a car owner of a three-car XFINITY team (two of them involved in Jairo Avila, Jr.’s short night on Friday), and as a driver. He’s been behind the wheel of Beaver Motorsports’ #1 in the Truck Series, finishing 30th at Chicagoland, and other than a one-off for his XFINITY effort has run all but one of this year’s XFINITY races with JD Motorsports. His best finish of the year in the second-tier series came at Pocono, where he ran 17th.

Between Dover and Saturday’s race, McLeod had also made three more Cup starts at Charlotte, Chicagoland, and Daytona, all for Rick Ware Racing. It was at Charlotte that McLeod debuted Ware’s new third “open” team, the #53 Chevrolet, one of three that paint scheme designer and military veteran David Marrero designed for the team to resemble famous aircraft. Both of McLeod’s best finishes on the Cup side have so far come at Daytona, where he ran 19th after a pit road incident in the Daytona 500, then 28th in last week’s shortened Coke Zero Sugar 400.

At Kentucky, McLeod would drive Rick Ware’s #52 team on the Cup side, sharing sponsorship from Jacob Companies with teammate Bayley Currey in the #51 Ford. He would also run the XFINITY race for JD Motorsports, but for the first time this season in the #4 previously campaigned by Ross Chastain before he declared for Truck Series points (and then nearly finished last at Daytona with Landon Cassill before A.J. Allmendinger's disqualification).

On the XFINITY side, McLeod ran 19th and 27th in practice, then finished a solid 20th with sponsorship from Ken Houston Electric. In Cup, McLeod ranked 34th in opening practice and was one of three drivers who didn’t turn a lap in Happy Hour. He originally qualified 35th for the main event with the second-slowest time of 174.396mph (30.964 seconds), besting only Daytona winners Spire Motorsports, who saw Quin Houff return to drive. The #77 carried a white-and-blue paint scheme for the race with sponsorship from Go-Parts.com, and a Race Winner sticker on the roof rail commemorating Justin Haley’s win the week before. McLeod then moved to 34th for race day after both Houff and the #6 Acorns Ford of Ryan Newman failed pre-race inspection, disallowing their times. McLeod’s speed then became the slowest official lap of record. With only 36 Chartered entries in the field, all entrants qualified for the race.

When the race started, the penalized Newman and Houff started in the final row. Newman, running the low lane, moved ahead of Houff into Turn 1, then drove past McLeod in short order. By Turn 3 of the first lap, Houff was closing on McLeod and attempted a pass to the inside. McLeod held him off, but they were side by side again coming to complete Lap 2. McLeod held him off once again, and this time pulled away by open track. On the 19th go-round, polesitter Daniel Suarez caught and passed Houff, putting him one lap down. Houff then caught and passed McLeod by Lap 28, dropping the #52 back to last.

At the time of Houff’s pass on McLeod, word came during the broadcast that Brad Keselowski’s #2 Miller Lite Ford had a possible broken valve spring. With all 36 cars still running, this raised the possibility of Keselowski taking his first last-place finish in his 360th start, one week after narrowly averting it in Daytona. While Keselowski never contended for the win, he did manage to finish just one lap down in 20th.

Meanwhile, McLeod had again passed Houff, who dropped three laps down by the first caution on Lap 48 for debris from Chase Elliott’s #9 Mountain Dew DEWnited States Chevrolet. On the Lap 60 restart from a second caution for Corey LaJoie’s spin in the #32 Keen Parts / CorvetteParts.net Ford, McLeod and Houff were again side-by-side for position, each of them two laps back. The two pitted together on Lap 67 with McLeod beating Houff off pit road to put the #77 back to last. Houff passed McLeod on Lap 71, and McLeod said the #77 chased him into the wall to get by. On the next round of pit stops, Houff this time beat McLeod off pit road as the #52 had a long stop.

On Lap 102, Bayley Currey, McLeod’s teammate in the #51, took over last for the first time as he fell three laps down. By Lap 116, however, McLeod was the first car in the garage area, steering his Chevrolet into his stall. The driver reported the car dropped a valve or a valve spring, and said when he shut it off it sounded like the car “had a dead cylinder.” Not wanting to blow the engine, he shut off the car and pulled behind the wall. On Lap 126, well and truly in last, McLeod said the issue was only in the top of the engine and not the bottom. McLeod said “Thanks for the effort, you had me a good car here,” and on Lap 130, his car was unavailable on RaceView. NBC indicated McLeod was out around this time.

McLeod was the only driver to fail to finish Saturday’s race. Finishing 35th was Austin Dillon, who finished third in Stage 2 only to lose high gear in his #3 AAA “We Know Cars and Drivers” Chevrolet and lose 31 laps by the checkered flag. Houff ended up 35th, nine laps down to race winner Kurt Busch. Rounding out the group were McLeod’s teammate Currey and Landon Cassill in the #00 StarCom Fiber Chevrolet, who both spun into the Turn 2 wall on Lap 63. Both continued on to finish seven and six laps down, respectively. 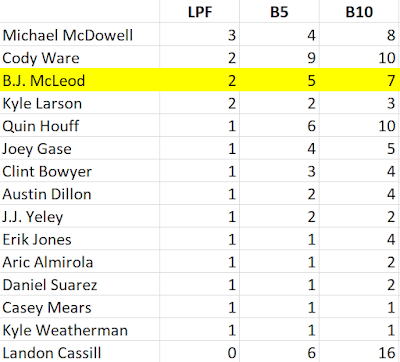 Quick question Brock. How come you don't update the all-time last place finishes and the series last places finishes with the colors/bold anymore?

Thanks for all you do with this site and covering the drivers and teams who don't get the coverage!

Basically, it was taking a bit too much time in the editing process. I felt it was better and easier to instead show the date when each stat page was last updated. The good thing is, you can use your "find on page" function on your browser to find any driver on the page. Thanks for your support!