ARCA: Stefan Parsons a surprise entrant - and exit - at Chicagoland

Stefan Parsons scored the first last-place finish of his ARCA Menards Series career in Thursday night’s Bounty 150 at Chicagoland Speedway when his #28 GM Parts Now Chevrolet fell out with brakes issues after 5 of 100 laps. The finish came in Parsons’ first career series start.

The last name Parsons should sound familiar to many fans of stock car racing. Brothers Benny and Phil were fixtures on the NASCAR circuit in the late twentieth century, and both eventually transitioned into the television booth. While the late Benny made it into the NASCAR Hall of Fame after broadcasting, younger brother Phil tried his hand at team ownership, first during his driving career with his own effort, and then after his driving career in a joint venture with legendary LASTCAR team MSRP Motorsports, which later turned into Phil Parsons Racing after other partners left the team.

In the midst of Phil’s last Cup Series season, his son Stefan was born. Of course, being around racing only could lead to the local Bandolero races at Charlotte Motor Speedway, which Stefan started racing when he was age twelve after another racing father, Ken Ragan, encouraged Phil to let Stefan race. He later moved to Legend cars and late models, running part-time in the CARS Tour in 2015, 2016 and 2017. He made his Truck debut with Premium Motorsports at Bristol last year, tallying an impressive 17th-place run before running 20th in the season’s penultimate race at ISM Raceway, again in the 15.

This year, a ride in the Beaver Motorsports #1 resulted in an early exit at Las Vegas and, using Ray Ciccarelli's owner points for CMI Motorsports, ran a “Charlotte Strong” tribute truck at Charlotte after the UNC-Charlotte shooting. That night, he finished 24th after the team missed the setup. Another name familiar to LASTCAR readers, Joe Falk, has become a backer of the young man’s career, with his Little Joe’s Autos adorning the TV panel for the Charlotte race. He was not announced as an entry for this week’s ARCA race but rather just popped in a late edition of the entry list.

Parsons' ride last week was fielded by Mike Bursley, a late model team owner in Michigan. Previously, Bursley ran veteran Brian Campbell for some time up until 2014. The KBR team shut down until Zach Dunson came over from Port City Chassis at the beginning of the 2016 season and reignited the team. Young hot shoe Carson Hocevar began driving for the team, and in late 2018, KBR made its ARCA debut with Hocevar behind the wheel at Toledo in spring, and later appeared for a pole-winning run at Berlin and a top-five run at IRP. It expanded over the offseason to a full-time schedule with technical support from GMS Racing. Chassis and owner points were acquired from MDM Motorsports, and the number changed to 28. Hocevar would run the races that he could run under age restrictions, and Brandon McReynolds would fill out superspeedways, though if other drivers had the right situation in terms of funding, they could also fill the seat for those races. Before Parsons, the only driver to do that was Kyle Busch Motorsports prospect Raphael Lessard, who drove a second team car at Five Flags but then took over the #28 at Pocono. Why McReynolds was swapped for Parsons at Chicagoland is not known, as McReynolds was presumably at Chicagoland fulfilling his duties as a driver coach and spotter for Xfinity Series driver Noah Gragson.

An even 20 cars were shown on the entry list for the Bounty 150, as the superspeedway crew showed up plus one – Win-Tron Racing entered its #32 for Austin Wayne Self. Self, who found success in ARCA with the now-defunct Mason Mitchell Motorsports and Cunningham Motorsports before moving to the Truck Series, was back in ARCA for the first time since 2017, where he garnered a sixth-place finish in the #32 machine at Road America. Eric Caudell, Thad Moffitt and Tanner Gray each extended part-time schedules for their entries. Fast Track Racing entered Jason Miles and Morgen Baird, the former racing for the team at Charlotte earlier this year and the latter racing for the team at Michigan. Wayne Peterson Racing also continued its re-expansion, which was highlighted in last week's ARCA feature. This time, however, the second driver entered was Con Nicolopoulos instead of Wayne Peterson.

Eventual race winner Ty Majeski paced the lone practice, and it was his Chad Bryant Racing teammate Joe Graf Jr. on the other end of the scoring pylon, a mechanical failure dropping him to a backup car for the race. Championship leader Michael Self grabbed his first pole of the season, and while Nicolopoulos was slowest of the cars that took a time, two cars did not take a time: Christian Eckes would start 19th and Travis Braden, who experienced issues with the starter during qualifying, would roll off last.

That was before a slew of grid penalties took effect, however. A staggering seven drivers were assessed tail-end penalties before the race: Nicolopoulos, Caudell, Graf and Riley Herbst for unapproved adjustments, and Parsons, Miles and Brad Smith for pitting before the green.

Parsons, who was originally slated to roll off from eighth, was seventeenth at the completion of lap one but then moved up to sixteenth during lap two, and stayed there for the duration of his five-lap run before retiring, citing “brakes” as the reason out. While KBR hadn’t "start-and-parked" before, this may have been the case. As of this writing, neither team nor driver have given any update on why they fell out so early. In fact, the driver’s social media channels only noted that it Parsons' series debut and that he would start eighth. 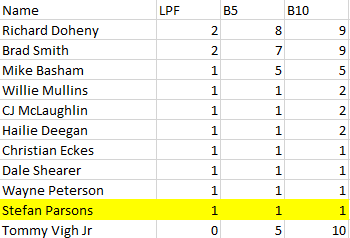 Stefan confirmed on Rubbin's Racin' (username: sp98) that this was a start-and-park.