Tommy Vigh Jr. scored the first last-place finish of his ARCA Menards Series career in Friday night’s Fans With Benefits 150 at Iowa Speedway when his #10 Extreme Kleaner / Thomas Coffee Ford fell out after 4 of 150 laps with driveshaft problems. The finish came in Vigh’s 17th series start.

A native of Otisville, New York (not far from the home of former ARCA driver Tyler Dippel), Vigh is another one of ARCA’s through-and-through blue collar racers. He started his racing career in street stocks in 2009 and later moved up to the Pro Stock division and then to Sportsman Modifieds at Orange County Speedway, competing in regional DIRTcar events. He has won multiple fan favorite awards, and has found victory lane multiple times on the dirt. He moved up to the ARCA Racing Series in 2017, driving the #10 for Andy Hillenburg at Madison. It was an adventurous debut, and Vigh finished the last car running, eighteen laps down in 15th. He found more success at the two dirt ovals, recording a pair of 13th-place finishes in the #10 machine. All three efforts were backed by Extreme Kleaner, owned by a friend of Vigh’s.

That same company was announced to back Vigh’s Daytona debut, which was announced just before Christmas last year. After appearances at Five Flags and Salem, team owner Andy Hillenburg confirmed to the author that Vigh would in fact contest the full season. Vigh also enrolled in the Bounty Rookie of the Year Challenge, in which he currently sits second behind Christian Eckes. His early 2019 season was highlighted by a vicious crash at Talladega and then his first top-ten finish two weeks later, scoring a ninth at Toledo. At Pocono and subsequent events, however, Vigh has seemed to "start-and-park" for most races, failing to finish all except Madison, where the return trip went much better than the original, yielding an 11th-place finish. Vigh wasn’t even on the preliminary entry list for Iowa, but replaced current ARCA LASTCAR championship leader Richard Doheny by the time the race came around.

ARCA remained an undercard event at Iowa, but instead of supporting stock cars, they joined the IndyCar Series this weekend. Nineteen cars graced the entry list, complete with a variety of returning part-timers. Stadium Super Truck driver Gavin Harlien ran in Venturini Motorsports #55 for the second of his three scheduled starts, Kaden Honeycutt returned in his family-owned #38 for the first time since Nashville, Rick Clifton and Jason Miles rounded out Fast Track Racing’s other two cars, and Colby Howard made his first ARCA start in thirteen months, driving Win-Tron Racing’s #32.

All of the nineteen cars on the entry list participated in practice, with Chandler Smith cementing his spot at the top of the leaderboard for the weekend. Richard Doheny drive the 10 car in practice, and that entry anchored the charts, six seconds behind Smith. Fast Track Racing teammate Jason Miles was at the bottom for qualifying, running roughly the same speed Doheny did during practice.

At the beginning of the race, both the 10 car and the 23 of Bret Holmes were sent to the back, the 10 for a driver change to Vigh and the 23 for going to a backup car. Holmes made it up to 13th by the end of Lap 1, but Miles and Vigh remained in the bottom two spots until both of them pulled behind the wall, Vigh after four laps and Miles after 20 laps. Brad Smith pulled in after 35 laps, the last entry to retire from the race. Tim Richmond was the last car running after a spin in the late goings of the race, and Scott Melton rounded out the Bottom Five, eleven laps down. 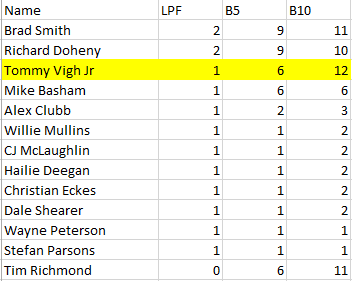