Alex Clubb finished last for the first time in his ARCA Menards Series career in Saturday night’s Menards 250 presented by MatrixCare at Elko Speedway when his #0 GreatRailing.com Dodge retired with brake problems after 14 of 250 laps. The finish came in his 10th series start.

One of the more interesting men one will find on the ARCA Menards Series circuit, Alex Clubb leads a busy life. He is the owner of A. Clubb Lawn Care in his hometown of Morris, Illinois, and turned an interest in politics following the 2016 election cycle toward winning a seat on the city council. On top of this, Clubb is a racer like many one will find at their local short tracks on weekends – he funds his racing through his business, and it is him, his father and a cousin that run the operation. Clubb was also, for a time, a local short tracker, shining at Grundy County Speedway. He made his ARCA debut in 2015 for the now-defunct Carter 2 Motorsports, running three events in the back half of the season. After the demise of that team, Clubb returned to the series at DuQuoin in 2017 and then Springfield, DuQuoin and Salem in 2018 with his own equipment. Tentative plans for 2019 included both Salem races, Toledo, Madison and the two dirt tracks. While the first two of those happened, engine problems sidelined the team for Madison, though they still made the trek up to serve as the pit crew for fellow independent Eric Caudell. Clubb teamed up with Wayne Peterson Racing for this week’s race at Elko, driving a Dodge. Dodge sightings, like a year ago in the XFINITY Series, are becoming rarer and rarer, with the old-style bodies only eligible for use at tracks three-quarters of a mile and under and not eligible at all next year.

Twenty teams made the trek to Minnesota for Saturday night’s race. Wayne Peterson Racing entered two cars, with a familiar driver behind the wheel of one and a familiar face in a different way behind the wheel of the other. Team development driver Tim Richmond was behind the wheel of a Ford, and Clubb piloted the team’s trademark short track Dodge. That wasn’t the only Dodge in the field, however - Eric Caudell also busted out an old Dodge as the number of races that teams are eligible to use Dodge chassis winds down. Mike Basham continued to make the rounds of established ARCA teams this year, driving Andy Hillenburg’s #11 entry while Richard Doheny continued his run in the #1 car this year. Dale Shearer returned to Kimmel Raing’s #69 car, and Hailie Deegan continued her partial schedule in Venturini Motorsport’s #55 car. Win-Tron Racing entered for the first time this year with a driver not racing for points in the Gander Outdoors Truck Series. Howie DiSavino III, a teenage late model racer from Chesterfield, Virginia, signed on to test at Hickory and drive at Elko for the team.

In practice, Christian Eckes ran 51 laps and led the charts with a lap of 14.524 seconds. On the opposite side of the spectrum was Richmond, who ran only four laps in practice and clocked in last out of the 20 cars with a lap of 16.998 seconds. In qualifying, it was much of the same story, with Eckes on top of the board and Richmond, who did not complete a lap, on bottom.

Richmond started shotgun on the field and stayed there until Lap 15, when Clubb went behind the wall. Clubb, meanwhile, had advanced from his starting position of 15th up to 14th, passing Eric Caudell. Brad Smith went behind the wall after 33 laps, and Doheny retired after 39 laps as a result of crash damage, although no caution was ever thrown regarding an incident he was in. Mike Basham and Tim Richmond completed the Bottom Five, both also citing mechanical reasons. 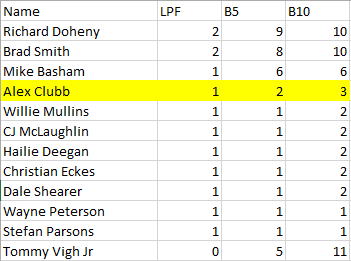