Brandon Jones picked up the 2nd last-place finish of his NASCAR XFINITY Series career in Saturday’s Pocono Green 250 at the Pocono Raceway when his #19 Juniper Networks Toyota was involved in a crash after 6 of 103 laps.

Following a disappointing 16th-place finish in points at the end of 2017, Jones and his Menards sponsorship made the move from Richard Childress Racing to Joe Gibbs Racing in 2018. There, the Atlanta-born driver improved his record from zero Top Fives to two, and from three Top Tens to seventeen. Through it all, Jones’ #19 Toyota won the pole at Dover, and finished a season-best 2nd to Spencer Gallagher in Talladega. But the Playoff bid ended in the first round, and after dodging a first-lap pileup the next week in Kansas, he veered into the outside wall on the restart, resulting in his fourth DNF of the season.

This year, Jones continues to fight for consistency. Coming into Pocono, he finished a season-best 3rd in the opener at Daytona and finished seventh or better in four of the first five races. But he also failed to finish three times, starting with a brutal crash late in the running at Las Vegas. Two 33rd-place finishes followed after a crash in Texas, then a late blown engine in Richmond. Jones sat mired in 12th in points since the Richmond race, and despite a 10th-place showing in Charlotte, arrived a full 201 points back of the lead.

At Pocono, Jones ran 13th in both Friday practices and improved to 7th in qualifying with a lap of 168.925mph. Jones admitted Pocono was one of his worst tracks, citing his previous three finishes of 8th, 36th, and 24th. However, he’d also nearly matched his track-best 6th starting spot from a year earlier, opening the possibility for a good run.

With only 38 drivers entered for as many spots, no drivers were sent home. Qualifying 38th and last for Saturday’s race was Matt Mills, who was sent scrambling to a backup car following an incident Friday in his #5 J.F. Electric Chevrolet. Under the time constraints, team owner B.J. McLeod rolled out their backup car, the #99 Diamond Gusset Jeans Toyota that Tommy Joe Martins ran last month in Dover. The team applied a black decal with a rather unusual white #5 to each door and the roof of the white car, and Mills turned in the slowest lap in qualifying. In fact, only Mills and 37th-place qualifier Morgan Shepherd turned laps that timed in at over one minute, nearly eight seconds off Cole Custer’s pole lap.

Mills’ backup car was one of two sent to the rear, joined by 23rd-place starter John Hunter Nemechek, whose #23 ISM Connect Chevrolet spun and backed into the wall. In place of his white-and-red ISM colors, Nemechek drove his backup, the black Fire Alarm Services scheme. Also sent to the rear was 6th-place starter Tyler Reddick, who needed a new transmission on his #2 Tame the Beast Chevrolet, and 30th-place qualifier Ronnie Basett, Jr. for unapproved adjustments on DGM Racing’s #90 Bassett Gutters & More Chevrolet.

Another last-minute penalty dropped Mike Harmon to last. One week after Camden Murphy drove in his place at Charlotte, Harmon returned to his #74 The Journey Home Project / Charlie Daniels Chevrolet and qualified 35th. NASCAR’s Penalty Report indicated Harmon incurred two tail-end penalties during the warm-up laps, but did not cite a reason. Both penalties were served on the first lap – the first dropping the #74 to 38th on the grid, and the second costing him a lap. These penalties accounted for his sudden deficit to the field at the start, when he was shown 19.369 seconds back of the lead as the green flag dropped. Now two laps down as he returned to the track, Harmon was bucked-up by his crew on the radio, which told him he was faster than the two cars now in front of him – the #13 CrashClaimsR.us Toyota of John Jackson and the #89 Visone RV Chevrolet of Morgan Shepherd. There was some difficulty communicating this, however, as the team had radio issues on top of everything else.

On Lap 7, Harmon’s crew alerted him to trouble in Turn 1 and told him to take the high line through the corner. As it turned out, this was the incident that eliminated Brandon Jones from the race. Jones had worked his way up to 4th in front of JR Motorsports teammates Michael Annett and Justin Allgaier when his car broke loose on its own between Turns 1 and 2. The spin sent him backwards into the outside wall, destroying the rear clip and the left-front corner. Jones managed to pull onto pit road, but soon after made the hard left turn into the garage area, done for the day under the Crash Clock. Harmon passed Jones under caution and ultimately climbed to 28th, the next-to-last car to finish under power. The result was Jones' first last-place finish - and Bottom Five - of 2019.

Spins and wrecks continued to plague the opening of Saturday’s race, followed by a series of early exits for other reasons. Eight drivers were out by Lap 37. Finishing 37th was last week’s last-placer Chad Finchum, his #42 Smithbilt Homes Toyota the only car eliminated in an accident with teammate Joey Gase. Jeff Green pulled out after 22 laps with electrical issues on his #38 RSS Racing Chevrolet, followed by Morgan Shepherd in 35th due to handling woes. Rounding out the group was Green’s teammate Josh Bilicki in RSS’ #93 Chevrolet. It was a rough afternoon for the Sieg team in general as the primary car of Ryan Sieg only managed 26th after he started a strong 5th.

One Brandon’s struggle was followed by another’s success. Brandon Brown continued his strong season by matching his season-best 13th-place finish for the third time this season in his family’s #86 Vector Security Chevrolet. Brown holds 15th in the point standings, 327 markers out of the lead, but just two behind Gray Gaulding, who earned his tenth top-twenty finish of the season and sixth in a row by coming home 20th.

LASTCAR STATISTICS
*This marked the first last-place finish for car #19 in an XFINITY Series race since September 2, 2017, when Matt Tifft’s #19 Ron Jon Surf Shop Toyota crashed after 1 lap of the VFW Sport Clips Help a Hero 200 at Darlington. The number had never finished last in a series race at Pocono. 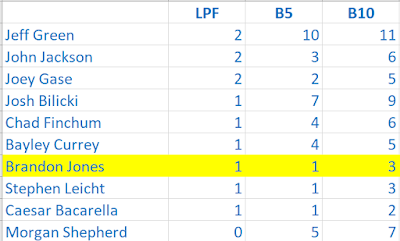