Josh Bilicki picked up the 4th last-place finish of his NASCAR XFINITY Series career in Sunday’s CircuitCity.com 250 at the Iowa Speedway when his unsponsored #93 RSS Racing Chevrolet fell out with electrical problems after 10 of 250 laps.

The finish also jumped Bilicki into second in the 2019 LASTCAR XFINITY Series Championship, where he still trails teammate Jeff Green on a bottom-five tiebreaker of 12-8.

The Wisconsin-born Bilicki has continued to make the most of the opportunities presented him, even when driving for lesser-funded teams. Just last week at Michigan, he welcomed new sponsorship from the Zeigler Auto Group, and picked up a season-best 21st-place finish. It was the first time Bilicki had finished an XFINITY Series race under power since Texas, where he ran 30th. He’s also branched out into NASCAR’s other two top series. The Ziegler Auto Group also backed his first Cup start of the year, also at Michigan, where he ran 33rd for Rick Ware. His lone Truck start of 2019 at Kansas saw him run 18th in Josh Reaume’s #34 Chevrolet. That night, Bilicki beat Reaume himself by two positions.

Bilicki began the weekend 31st of 36 drivers in opening practice, then on Sunday qualified 36th with a speed of 124.985mph (25.203 seconds). As in the Truck Series race, no drivers were sent home following a late withdrawal. On the XFINITY side, it was Rick Ware Racing’s #17, which didn’t have a driver listed. Reports indicated the car was withdrawn to ensure Shane Lee could qualify for brand-new team H2 Motorsports. Lee’s #28 Toyota Supra, the paint scheme designed by David Marrero, carried the race’s sponsor Circuit City. Lee qualified 17th.

Starting 38th and last was Timmy Hill, who this week took the controls of Carl Long’s #13 CrashClaimsR.us Toyota for Motorsports Business Management. The only driver penalized to join him was Justin Haley, whose #11 Leaf Filter Gutter Protection Chevrolet had a new engine. Voluntarily falling to the rear was Morgan Shepherd, whose #89 Visone RV Chevrolet rolled off behind Hill when the race started. During that first lap, Shepherd drove past Hill’s teammate Stan Mullis in the #66 LasVegas.net Toyota. Mullis fell 10.948 seconds back of the lead after three laps, but was then passed for last by another driver diving onto pit road.

Making his first XFINITY Series start of the season, 28th-place starter Ryan Ellis incurred a penalty for jumping the start that forced him to come down pit road on Lap 5. The stop caused Ellis’ #99 Wes Cook Band Toyota to lose two laps. After ten laps, Bilicki came down pit road, then pulled into the garage. The #93 crew was having radio issues at the time, someone saying “rainbows and unicorns” between the interference. Bilicki took last from Ellis on Lap 13.

While Jeff Green has traditionally pulled in his #38 just as early – and did join Bilicki six laps later - Green was beat for the 37th spot by Ryan Sieg in the RSS team’s flagship #39. The team had fuel pressure issues, and the crew spent more than 22 laps trying to diagnose the issue. During this time, all three RSS Racing entries occupied the final three spots. Finally, on Lap 35, Sieg returned to the track under caution and proceeded to use the rest of the race as a test session. By Lap 62, Sieg had climbed out of the Bottom Five, but the impromptu test session was plagued by more fuel pressure issues. Sieg finished 30th, completing 78 laps before the fuel pressure issue ended his day.

Jeff Green finished 37th, just days after it was announced he would sit out the rest of the season after Kentucky due to rotator cuff surgery. Last-place starter Hill took 36th followed two circuits later by Shepherd in 35th. Rounding out the Bottom Five was David Starr, whose #52 Franklin Signs & Graphics Chevrolet erupted in smoke after 30 laps. The incident handed Starr his first Bottom Five of 2019.

LASTCAR STATISTICS
*This marked the fifth last-place finish at Iowa for the #93 and comes with its fourth different driver. 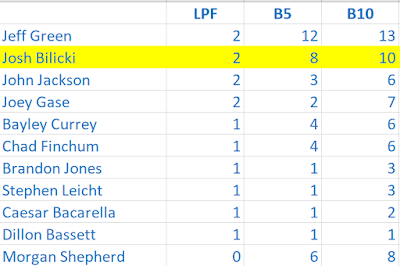