Dillon Bassett picked up the 1st last-place finish of his NASCAR XFINITY Series career in Saturday’s LTi Printing 250 at the Michigan International Speedway when his #90 Bassett Gutters & More Chevrolet was involved in a two-car accident after 8 of 125 laps.

Dillon and his older brother Ronnie Bassett, Jr. have become an increasing presence in NASCAR’s second-tier series. They grew up in their family’s business, Bassett Gutters and More, Inc., a home improvement business in their native Winston-Salem, North Carolina. The company backed the two racing’s efforts as far back as 2012, when Ronnie finished 12th out of 36 drivers in the Denny Hamlin Short Track Showdown. The next year, Dillon joined him in the same race and won the pole. Ronnie made it by to finish 4th to Dillon’s 7th.

The friendly rivalry has continued from the K&N Pro Series East and now the XFINITY Series. Ronnie made his K&N debut first, finishing 23rd at Greenville-Pickens on September 2, 2013. But it was Dillon, who started two years later, who reached victory lane first, taking the checkers in just his tenth start at Smithton, Pennsylvania on August 15, 2015. That year marked the only time Dillon bested Ronnie in the K&N East standings, where older brother’s best run was a 3rd in 2017, when he first went to victory lane in the New Smyrna opener.

The battle has continued into this year’s XFINITY Series, where both have traded rides with Mario Gosselin’s DGM Racing. Ronnie made his debut first at Phoenix, again in the colors of his family business. An accident sent him to a backup car, which he steered to a 32nd-place finish with brake issues. Two races later, Ronnie bounced back with a 15th-place finish in Texas. Once again, Dillon was quick to impress, and in his own debut at Richmond matched his brother’s 15th-place finish. Another battle of the brothers was set to take place two races ago in Charlotte, but Dillon failed to qualify the #90 while Ronnie finished 25th in the #92. Michigan would be Dillon’s next start, though again without Ronnie in the field.

Dillon started the Michigan weekend 22nd on the speed charts, then rocketed to 4th in Happy Hour, trailing only the Cup-backed efforts of Christopher Bell, Cole Custer, and Tyler Reddick. He then qualified 19th for the race at a lap of 188.171mph (38.263 seconds), more than enough to make the show. Landon Cassill turned in another fast lap as a last-minute driver change with Morgan Shepherd, steering the #89 VisOne RV Chevrolet to 16th on the grid. With 39 drivers entered for 38 spots, the lone DNQ was itself a surprise – the Richard Childress Racing #21, which ARCA regular Joe Graf, Jr. was to make his series debut.

Starting 38th on Saturday was Garrett Smithley, the first leg of his double-duty weekend coming in JD Motorsports’ #0 Trophy Tractor Chevrolet. Five other drivers would be sent to the back for pre-race penalties. Riley Herbst was sent to a backup car after he tore the rear clip off his #18 Monster Toyota in an accident in practice. The backup managed just 30th on the grid. Unapproved adjustments sent back 36th-place Joey Gase in the #35 Clubfoot Solutions Toyota and 21st-place Tommy Joe Martins in the #99 Diamond Gusset Jeans / The Podgoats Toyota. Bassett’s teammate Josh Williams changed tires on his #36 Star Brite / Star Tron Simcraft Chevrolet, costing him 29th on the grid. Finally, an engine change docked 35th-place starter David Starr in the #52 Pro Waste Services Chevrolet.

By the time the field addressed the starter’s stand, the tail end of the field had again changed. Last-place qualifier Smithley was up to 29th, followed by the five penalized drivers led by the #18 of Herbst. Behind them, three more drivers had voluntarily fallen to the rear: 16th-place Cassill in Shepherd’s #89, 26th-place qualifier Jeff Green in the #38 RSS Racing Chevrolet, and new last-place starter Timmy Hill in the #13 CrashClaimsR.us Toyota.

Heading into the first corner, Hill and Green ran side-by-side for the last spot, and Green pulled ahead to drop Hill to last down the backstretch. Falling into the pair’s clutches was Vinnie Miller, who originally qualified 37th in the #78 1-800-Roll-Off / Pit Viper Chevrolet. Both Green and Hill passed him after the completion of Lap 3, dropping the #78 to last. Moments later, Green pulled down pit road and re-took the spot from Miller.

Seconds later, Basett, who was running around 26th, slid up the track in Turn 4 and made contact with the #07 Isokern Fireplaces & Chimneys / Scuba Life Chevrolet of Ray Black, Jr. While Black backed into the wall, Bassett’s car veered hard left into the grass, destroying the left-front of his splitter. Bassett and Green both made it to pit road before Black, each incurring tail-end penalties for pitting while pit road was still closed. Bassett made it back on track laps down, only to pull down pit road on Lap 12 after the yellow came out for Jeb Burton’s spin down the backstretch. This time, Bassett pulled into the garage, done for the day.

Finishing 37th was Herbst, whose rough day ended with another hit to the outside wall just before Burton’s spin. Green returned to action from his second pit stop, then exited after 17 laps complete to take 36th. Finishing 35th was Tyler Hill, who took over brother Timmy’s #66 MBM Motorsports Toyota before engine issues ended his day after 17 laps of his own. Rounding out the group was Kyle Weatherman, switched into Mike Harmon’s #74 The Journey Home Project / Charlie Daniels Chevrolet earlier in the week. It was the first Bottom Five of the year for Bassett, Herbst, Hill, and Weatherman.

Brandon Brown finished outside the Top 20 for just the second time this year, finishing 26th, but was running around the 18th spot on the final lap when he ran out of fuel. 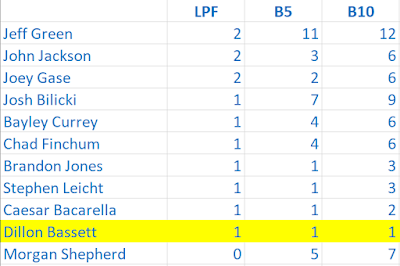