Christopher Bell picked up the 1st last-place finish of his NASCAR XFINITY Series career in Saturday’s Camping World 300 at the Chicagoland Speedway when his #20 Rheem Toyota finished 3rd, but was disqualified after completing all 200 laps.

Jeff Green picked up the 117th last-place finish of his NASCAR XFINITY Series career in Saturday’s Camping World 300 at the Chicagoland Speedway when his unsponsored #38 RSS Racing Chevrolet fell out with electrical issues after 11 of the 200 laps.

The finish, which came in Green’s 528th series start, was his series-leading third of the 2019 season and first since Richmond, seven races ago. The finish allowed Green to break a four-way tie for the 2019 LASTCAR XFINITY Series Championship, where he’d prevailed on a bottom-five tiebreaker with Josh Bilicki, John Jackson, and Joey Gase.

Bell has continued to serve notice that he is one of NASCAR’s most promising talents. A development driver with Joe Gibbs Racing and Kyle Busch Motorsports, Bell finished 5th in his first Truck Series start for KBM in 2015, and won his first series race in just his third start at the Eldora dirt track. The Eldora race was very much a throwback to Bell’s impressive short track resume in USAC, most recently his third consecutive victory in the Chili Bowl Nationals in his native Oklahoma.

In 2017, Bell stormed to the Truck Series title, picking up five wins, five poles, 15 Top Fives, and 21 Top Tens in a schedule with only 23 races. That same year, he finished 4th in his XFINITY Series debut at Charlotte, then took his first checkered flag in his fifth series start at Kansas. It seemed certain he would claim his first XFINITY Series title in his first full series season last year. This time out of 33 races, he scored seven wins, five poles, 18 Top Fives, and 20 Top Tens. The seventh win was a must-win in the penultimate round at Phoenix, where he led nearly half the distance. But he finished just 11th at Homestead’s championship race, where he lost the title to Tyler Reddick.

This year, Bell has picked up right where he left off. In the season’s first 14 races, he’d already won four, most recently his dominating performance at Iowa where he led 186 of 250 laps. Already assured his place in the Playoffs, Bell entered Chicagoland as the winningest driver of the season, though still 51 markers behind an equally impressive Reddick in the overall point standings. An announcement that Bell’s contract with Joe Gibbs Racing has been extended into next year has fueled speculation as to which series the driver will compete, and when he will make the jump to Cup.

Bell’s Rheem-sponsored Toyota Supra again showed speed in Chicago, where he ran 3rd in the opening practice, slipped to 15th in Happy Hour, then recovered to take 5th in qualifying with a lap of 176.430mph (30.607 seconds).

Starting 38th and last on Saturday was Jeff Green. Just two races from his planned rotator cuff surgery that will cut short his 2019 campaign, Green didn’t participate in opening practice, then ran 32nd in Happy Hour. He qualified for Saturday’s race with the Past Champions Provisional for his 2000 series title, securing him the 38th and final starting spot. Green’s lap of 166.461mph (32.440 seconds) was slower than two of the three drivers who failed to qualify – teammate Josh Bilicki in the RSS #93 Chevrolet and Joe Nemechek in Motorsports Business Management’s #13 Toyota. The slowest lap was turned by Morgan Shepherd, whose #89 Visone RV Chevrolet was also sent home.

Bilicki would end up starting Saturday’s race in place of Bayley Currey in Rick Ware Racing’s #17 Chevrolet, which Currey put a strong 23rd on the grid after the team withdrew in Iowa. The driver swap sent Bilicki to the rear along with 11th-place starter Chase Briscoe’s #98 Ford Performance Ford and 37th-place Vinnie Miller in the #78 JW Transport Chevrolet for unapproved adjustments, an engine change for Shane Lee’s #28 Titan Mining Rigs Toyota, which lined up 18th, and 24th-place Chad Finchum, whose crew chief Brian Keselowski missed the crew chief’s meeting, docking the #42 NLB Heating & Cooling / Ryan’s Collision Service Toyota. Green would also be sent to the rear for missing the driver’s meeting.

At the end of the first lap, Green re-took last place, running 5.375 seconds back of the lead. The next time by, he’d climbed past Bilicki’s #17, which was now 7.458 seconds behind. Green dispensed with Matt Mills’ #5 J.F. Electric Chevrolet the lap after that, and Bilicki passed Mills by the end of Lap 5. Two circuits later, Green had climbed out of the Bottom Five while Bilicki and Mills passed David Starr, who ran a new blue paint scheme on Jimmy Means Racing’s #52 Dealer Associates / Flurry Chevrolet. After ten laps, Bilicki was back in 37th, but had a two-second advantage on last-place Starr. By then, Starr was 20.673 seconds back of the leader, and already in danger of losing a lap.

During this tight battle for last place, the leaders brought out the first caution of the day. Justin Allgaier’s #7 Brandt Professional Agriculture Chevrolet was running 3rd when he lost control and spun in front of Christopher Bell, who avoided a collision. Under this caution, Green pulled behind the wall, preventing Allgaier from taking last during his stop for fresh tires. In doing so, Green pulled down pit road when it was closed for the Allgaier caution, incurring a penalty. The penalty was moot as he pulled behind the wall, out of the race. At the time, Green was apparently headed toward a tiebreaker in the 2019 LASTCAR XFINITY Series standings, where he’d been tied with Josh Bilicki, John Jackson, and Joey Gase.

Bell, meanwhile, crossed the line in 3rd behind race winner Cole Custer and Joey Logano, and earned strong finishes in both states with a 3rd in Stage 1 and a 2nd in Stage 2. That all changed when inspection results came through. Not only had Bell been cited for the front of his car being “extremely low,” as Ross Chastain’s truck had in Iowa, but the right-rear was “slightly high.” The result was an instant disqualification which classified him last in the field, bumping Jeff Green into 37th and taking Joey Gase out of the Bottom Five.

The rest of the Bottom Five saw Starr’s #52 out with engine trouble after 52 laps, followed three circuits later by Bilicki. Rounding out the group was Timmy Hill, who cited electrical issues on MBM’s #66 OCR Gaz Bar Toyota.

LASTCAR STATISTICS
*This marked the first time an XFINITY Series driver had been disqualified since April 16, 2005, when Johnny Sauter’s #1 Fleet Pride / Yellow Dodge was caught with an illegal carburetor following the O’Reilly 300 at Texas. Like Bell, Sauter wasn’t the race winner – he finished 14th.
*It’s also the first time a Toyota has been disqualified from a NASCAR points-paying race in the series’ top three divisions.
*This was not Bell’s first last-place finish across NASCAR’s top three series – on June 10, 2016, he trailed a Truck Series race at Texas after first-lap engine troubles.
*This was also the first XFINITY Series last-place finish for car #20 since November 11, 2000, when Scott Wimmer’s AT&T Pontiac, fielded by Bill Davis Racing, crashed out 13 laps into the Miami 300 at Homestead. The race came nine days before Wimmer made his unexpected Cup debut in the Atlanta finale after rain forced him to miss the weekend’s ARCA finale. The first XFINITY race at Chicagoland wouldn’t be run until the following July. 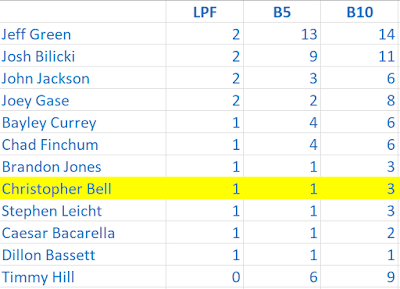