Gus Dean picked up the 2nd last-place finish of his NASCAR Gander Outdoors Truck Series career in Friday’s SpeedyCash.com 400 at the Texas Motor Speedway when his #12 4P Energy Services Chevrolet was eliminated in a single-truck accident after 10 of 167 laps.

The finish also jumps Dean into a close 2nd in the 2019 LASTCAR Truck Series Championship, trailing leader Joe Nemechek on a bottom-ten tiebreaker of 6-4.

In the two months since Martinsville, Dean has continued his up-and-down rookie season. His last-place run came one race before the Trucks’ most recent trip to Texas, where a tangle with Angela Ruch left him 29th. After that came back-to-back 14th-place finishes in Dover and Kansas, each an improvement on his career-best 15th in consecutive races at Daytona and Atlanta. Charlotte saw his struggles return as he again tangled with Ruch and Korbin Forrister, then drew a caution of his own on the restart. The frustrating night left him 26th, 11 laps down.

Dean has fared much better in the ARCA Menards Series, where this year he’s focused on the superspeedways driving for former Truck Series driver Kevin Cywinski. At Daytona, Dean led the second-most laps in to race winner Harrison Burton, only to be caught up in an accident and finish 26th. He returned at Talladega, leading another four laps and finishing 6th. Then at Charlotte, the Thursday after his difficult night in Trucks, Dean finished 3rd behind Ty Majeski and Sheldon Creed. It was Dean’s best finish since he was runner-up to Chandler Smith last September at Salem.

While both ARCA and the Truck Series ran last week, they did so at completely different tracks – ARCA as a companion race for the Cup and XFINITY Series in Michigan while the Trucks ran with IndyCar in Texas. Committed to his full-season ride with Randy Young, Dean was entered to run in only the latter and not the former.

Dean began the Texas weekend 18th in opening practice, improved to 9th in the second session, then back to 17th in Happy Hour. His qualifying lap kept him 17th on the grid at a speed of 181.665mph (29.725 seconds).

With 33 trucks entered for 32 spots, the lone DNQ fell to Ted Minor, who was attempting his return to the series for the first time since the fall of 2017. This time around, Minor entered his own truck, the #25 Xtreme Air / Phoenix Roofing / Prestige Plumbing Chevrolet. Although Minor’s lap of 163.691mph (32.989 seconds) outpaced one other driver, his brand-new team was sent home based on Owner Points.

The one truck Minor beat belonged to Natalie Decker, whose struggles continued with the slowest lap in qualifying, five-hundredths slower than Minor’s #25. Issues with Decker’s #54 N29 Technologies Toyota forced the DGR-Crosley team to make unapproved adjustments to it, and the driver incurred a redundant tail-end penalty. The only other driver incurring a tail-end penalty was Stewart Friesen, sent to a backup after his #52 Halmar International “We Build America” Chevrolet slammed the outside wall in Turn 2 during practice. Among the others to find the outside wall were ThorSport teammates Johnny Sauter and Ben Rhodes, but repairs were made to each without penalties.

When Friday’s race started, Decker passed 31st-place starter Norm Benning in his #6 H&H Transport Chevrolet. By the end of the first lap, Benning completed a pass on Joe Nemechek in the #87 Romco Equipment Chevrolet. Nemechek then caught and passed Scott Stenzel, back in the series for the first time since Las Vegas, this time in Josh Reaume’s #34 Personal Comfort Chevrolet. Benning then fell into Stenzel’s clutches, and a spirited battle developed between the two. At the end of the fifth circuit, Stenzel edged Benning for 31st by 0.021 seconds. Benning got him back at the end of six, then Stenzel after seven. After that, Benning remained in last until two incidents happened at nearly the same time.

At the end of Lap 10, 8th-place starter Tyler Ankrum made an unscheduled stop for a flat tire on his #17 Railblaza Toyota. The truck also had visible damage on the right-rear corner. The stop dropped Ankrum off the lead lap as he returned to competition. The moment he did, trouble broke out off of Turn 2. Gus Dean lost control off the corner and backed into the outside wall. The truck then careened across the track, slamming the passenger side against the inside barrier, and only barely missed passing traffic as it stopped in the middle of the track. Dean appeared uninjured as he climbed from the truck under the first of a record 13 cautions.

Similar accidents filled much of the Bottom Five as the average green flag run was barely over seven laps. In 31st came Kyle Benjamin, whose #45 Spray-on.com Chevrolet was also torn up after a single-truck encounter in Turn 2. The result was Benjamin's first Bottom Five of 2019. Codie Rohrbaugh’s 30th-place finish happened nearly the same was as Dean’s, his #9 Grant County Mulch Chevrolet stopped against the inside wall on the backstretch. Angela Ruch’s #44 The Ruch Life Chevrolet skated up the same corner on Lap 34, leaving her 29th. Nemechek rounded out the group soon after, pulling his #87 behind the wall with a vibration.

After briefly holding last before the Dean caution, Tyler Ankrum recovered to finish a strong 3rd, his first top-five finish in eight series starts. Brennan Poole in the #30 Bad Boy Mowers Toyota finished 7th for All Out Motorsports, his third top-ten finish in the last four Truck Series races. Cory Roper saved his truck from a spin into the Turn 2 wall and was rewarded with a career-best 9th in his #04 Preferred Industrial Contractors Ford, Roper’s first Top Ten.

Two other drivers impressed with career runs in the late stages. Anthony Alfredo’s fifth series start saw him starting up front late in Stage 3 and leading his first laps before he finished in 12th. And owner-driver Jordan Anderson in his black Bommarito.com / Lucas Oil Chevrolet (dubbed “007”) ran as high as 2nd, working over race leader and polesitter Todd Gilliland’s #4 Mobil 1 Toyota as the two battled down the backstretch on a restart. Anderson finished 15th.

Greg Biffle took the win in his first Truck Series start since November 19, 2004. Although Biffle has seven last-place finishes across NASCAR’s top three series, only one came in Trucks – his third-ever start at Phoenix on April 19, 1998.

LASTCAR STATISTICS
*This marked the first last-place finish for the #12 in a Truck Series race at Texas. 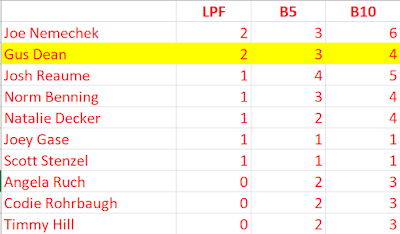