Greg Rayl picked up the 1st last-place finish of his NASCAR Gander Outdoors Truck Series career in Saturday’s CarShield 200 at the World Wide Technology Raceway at Gateway when his #0 Driven2Honor.org Chevrolet was involved in a single-truck accident after 2 of 160 laps.

At 55 years old, Rayl is not your typical newcomer to NASCAR’s top three series. His entry was one of the last to be announced – so late, in fact, that his name didn’t appear at first in the race results on Racing-reference.info. The Salida, California native has 32 starts in the K&N Pro Series West, but none since 2014. Since then, he’s most often worked as a crew chief, including with current Truck Series owner-driver Josh Reaume. Reaume tweeted that he recommended Rayl for the ride after some good-natured ribbing about his driving style. Rayl would have an opportunity to race against his driver, who lined up 21st in his own #33, as driver of Jennifer Jo Cobb’s second truck, #0.

With qualifying rained out, Rayl secured the 29th starting spot on Owner Points earned in two previous starts by the #0 earlier this year. He’d run around that spot in the weekend’s only practice session, putting up the 27th-fastest time of 32 drivers with a best of 126.950mph (35.447 seconds).

Starting last on Saturday night was Lou Goss, who this time had the former Mike Harmon Racing Chevrolet race-ready. Following Goss’ withdrawal in Iowa, the #74 Kramer Service Group / A&A Haulers Chevrolet turned its first three laps in practice, but could only run six seconds off the pace of session leader Stewart Friesen. Regardless, the 32-truck field guaranteed that he, too, would make his NASCAR national touring series debut along with Rayl and 31st-place starter Cody McMahan. McMahan, tabbed to drive Beaver Motorsports’ #1 Beaver Bail Bonds Chevrolet, had just one previous series attempt, when he DNQ’d at Bristol in a Cobb truck.

Unfortunately, all three drivers had short nights in Gateway. Rayl was joined at the back of the field by 27th-place starter Norm Benning, who missed the driver’s meeting. Just three laps later, Benning’s #6 H&H Transport Chevrolet passed the wreck of Rayl’s #0 following a crash in Turn 1 that ended his night. Goss made just ten more circuits before reporting a vibration, while McMahan exited with crash damage after 32 laps to finish 29th. Filling out the Bottom Five were the two NEMCO Motorsports Chevrolets of 30th-place Tyler Ankrum in the #87 and 28th-place Camden Murphy in the #8, both sponsored by Toenjes Brick Contracting.

The victory went to last week’s last-place finisher Ross Chastain, who became the first driver in the history of NASCAR’s top three series to follow-up a last-place by disqualification with a victory in the very next points race. Along with the $50,000 “The Trip” bonus from title sponsor Gander Outdoors and a smashed watermelon in victory lane, Chastain was awarded a trophy dedicated to the late Mike Mittler. Mittler was also honored with his family and crew giving the command and a salute on Lap 63, his former team number. Chastain returned to run Sunday’s Cup race in Sonoma, where he finished 33rd.

LASTCAR STATISTICS
*This marked the first Truck Series last-place finish for the #0 at Gateway since September 6, 2008, when Butch Miller’s #0 ASI Limited Chevrolet fell out with ignition woes after 3 laps of the Camping World 200 presented by Honda Power Equipment. 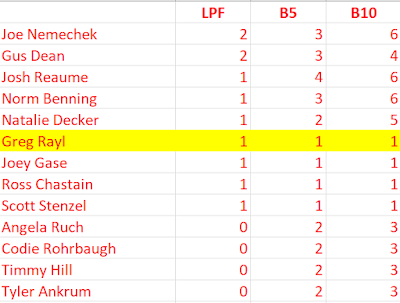