TRUCKS: Ben Rhodes’ night at Chicagoland goes up in smoke at the start

Ben Rhodes picked up the 1st last-place finish of his NASCAR Gander Outdoors Truck Series career in Friday’s Camping World 225 at the Chicagoland Speedway when his #99 Carolina Nut Co. Ford fell out with a blown engine after just 1 of the night’s 150 laps.

The 2019 season marks the Kentucky-born Rhodes’ fourth full-time season on the Truck Series tour. He first gained national notoriety in 2013, when he won the pole for the “Battle at the Beach exhibition at Daytona, led 87 laps, and finished a hard-fought second to Kyle Larson. That led to both his ARCA Menards Series and Truck Series debuts the following year, both backed by his short track sponsor Alpha Energy Solutions. His Truck debut came first, an 8th at Martinsville with Turner Motorsports, then an 11th in the ARCA race at Madison that August.

Rhodes’ full-time ride in the Truck Series wouldn’t come until 2016, following a ten-race stint in the XFINITY Series for JR Motorsports where he finished 7th in his debut at Iowa and won the pole at Road America. Driving ThorSport’s #41 Toyota, he began the year with a jump from Daytona’s impromptu short track to the full 2.5-mile superspeedway, and finished 7th. He started on the pole in his return to Martinsville just two rounds later, then had a breakout performance at Gateway, coming within eight laps of scoring his first series victory before a late pass by Christopher Bell.

Rhodes avenged his loss the following year, beating Bell to the checkers in Las Vegas. The victory was made even more sweet after Rhodes lost an engine at Kansas earlier in the season, again with eight to go. With the win, he made a late push into the Playoffs, only to be eliminated in the penultimate race at Phoenix after he crossed Austin Cindric’s nose on a restart. The accident also collected Rhodes’ ThorSport teammate Matt Crafton, who secured his own spot in the Championship Four at Homestead.

Last season, Rhodes won a second race in Kentucky, but his Playoff push ended with four races to go at Talladega. Though he finished just eighth in the standings, it was a career-best year for the driver in terms of Top Fives with eight, Top Tens with thirteen, and three poles, as well as 232 laps led. This carried him into the current year, where he switched truck numbers from the #41 to the #99. He entered Kansas winless on the season, but fourth in points on the strength of three runner-up finishes at Martinsville, Kansas, and Iowa. Just last year, the Chicagoland track saw him also finish 2nd to defending series champion Brett Moffitt.

Rhodes was one of 33 drivers entered in Friday’s race. But after Ted Minor withdrew his #25 Chevrolet earlier in the week, all 32 remaining entrants would all start the race. Rhodes was uncharacteristically slow at the track – he ran 13th in opening practice, where just 26 took time, then was 17th and 16th in the final two sessions. He qualified 17th with a lap of 174.859mph (30.882 seconds), more than three-tenths off the pole. The reason, as the FS1 booth reported later, was an oil leak, which raised concerns about the engine.

Starting 32nd and last on Friday was Joey Gase, who was back in Jennifer Jo Cobb’s #0 Chevrolet after Greg Rayl’s brief night last Saturday in Gateway. Gase put up the slowest lap in qualifying, and the only one over 35 seconds, just over five seconds off Austin Hill’s pole. He would be joined at the rear by Matt Crafton, whose #88 Fisher Nuts / Menards Ford qualified 11th but had to change engines, and 23rd-place Camden Murphy for unapproved adjustments on NEMCO Motorsports’ #8 Chevrolet. They would not stay in the back for long.

An instant after the green flag dropped, smoke erupted in the middle of the pack. It was Rhodes, whose Ford was now stuck in the middle of a three-wide battle as a large white cloud puffed from behind his Ford. As he pulled to the low lane down the backstretch, the truck still seemed up at race speed, holding his position ahead of Jordan Anderson and Ross Chastain. But he pulled down pit road that time by, where the crew pushed him behind the wall. The team raised the hood, only to find the issue terminal.

Gase finished in 31st, out with a vibration fourteen laps after Rhodes. Next came B.J. McLeod, who was swapped in Bayley Currey’s seat in the #1 Beaver Bail Bonds Toyota late in the week, and fell out two laps after Gase. Norm Benning’s #6 H&H Transport Chevrolet was parked after a reported miscommunication with NASCAR officials regarding a penalty for not meeting minimum speed. By the time Benning served the penalty, his #6 had been flagged off the track. Joe Nemechek rounded out the Bottom Five in his #87 D.A.B. Constructors Chevrolet.

Friday turned out to be a great night for two of the DGR-Crosley trucks. Not only did Anthony Alfredo finish 9th in the #15, nearly beating his career-best 8th at Charlotte, but the team’s newest entry, the #5, picked up a top-ten finish with a returning Dylan Lupton. Lupton, who had been absent from NASCAR’s top three series following the closure of JGL Racing last summer, made his first Truck Series start since 2016. After qualifying 9th, he defended the 10th spot in all three stages, earning his first-ever stage points in the process. His previous best in the series was a 12th, and his only other top-ten in a NASCAR national touring series race was a 9th at Mid-Ohio’s XFINITY race back in 2015. 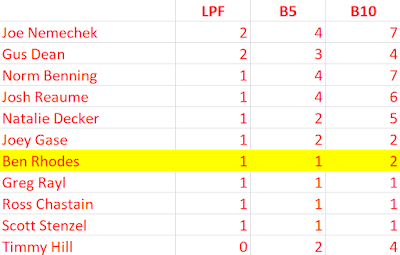