Wayne Peterson finished last for the 41st time in his ARCA Menards Series career in Saturday night’s Day-to-Day Coffee 150 at the World Wide Technology Raceway at Gateway when his #0 GreatRailing.com Toyota retired from the race with brake problems without completing any of the race’s 120 laps.

The finish came in Peterson’s 106th series start, and was his first since Salem last fall, 13 races ago.

Peterson’s underfunded team has changed their season strategy for 2019. Last year, Con Nicolopoulos ran nearly a full season for the team, splitting between the 0 and 06 entries. Dale Matchett, Mark Meunier, Don Thompson and Buck Stevens all made starts for the organization, which also kept owner points up for Bret Holmes Racing last summer. This year, Nicolopoulos has returned for a few superspeedway races, but just like what oftentimes happens in NASCAR, a young prospect has aligned with an underdog team to gain seat time. Former road racer Tim Richmond, a 20-year-old Illinois native, started on short tracks and has now been approved for all tracks after testing at Pocono. The Wayne Peterson Racing team has also downsized to one entry for most races this year, the one exception being Gateway, where the second entry went to the team owner. Peterson would drive Richmond's brown car from Pocono with the "6" on the "06" covered up.

The field size finally eclipsed 20 cars, a sign of progress for the series. The short track brigade entered, as did Thad Moffitt, reshaping his schedule from what was originally announced. Tanner Gray and Drew Dollar both ventured over form the K&N Pro Series East to drive Gateway (a track they will see later on in that series). Rick Clifton filled the rotating #11 for Fast Track Racing, and Gavin Harlien made his series debut in the #55 for Venturini Motorsports.

As is becoming a recurring theme for not just ARCA but racing in general in 2019, qualifying was rained out. Points leader Michael Self paced the field in what was then a combined happy hour/qualifying session, and Peterson was last of the 22, timing in at 43.76 seconds, over ten seconds off the pace set by the 25 car.

Before the race started, Mike Raphael at the track photographed 7th-place starter Tanner Gray behind the wall with the crew looking under the car. Gray's crew got him back onto the grid for the command, only to be eliminated due to handling issues from a crash, finishing 17th.

When the race actually started, the Bottom Five filled out relatively quickly with the increased field size. As with his 2018 starts, Peterson did not complete a lap before turning in. Clifton and Mike Basham, again driving the 69 this week, were out within the first ten laps. Tommy Vigh Jr. retired after 21 laps, and Tim Richmond completed the Bottom Five sweep of mechanical issues after 28 laps of running. 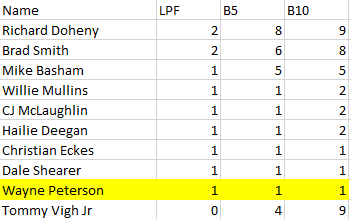