Richard Doheny finished last for the fourth time in his ARCA Menards Series career during Friday’s VizCom 200 at Michigan International Speedway when his #1 Doheny Racing Ford parked after seven of 100 laps with ignition problems.

At Michigan, Doheny flipped back to his familiar #1 entry, the first of several driver and team changes. Another tenured Fast Track Racing driver, Morgen Baird, took Dohney's place in the #11 entry with local sponsorship from Founders Brewing Company. Tim Richmond continued his drive in the #06 for Wayne Peterson Racing, and C.J. McLaughlin made it to the track after withdrawing from Pocono. Connor Hall ran a #7 Ford in the race as a third Chad Bryant Racing entry, using the owner points of Codie Rohrbaugh. Whelen Euro Series driver Myatt Snider returned to his old stomping grounds, but this time with a new team in Venturini Motorsports, driving the #20 machine. Speedway racers Scott Melton, Brandon McReynolds, Riley Herbst and Ty Majeski were all entered, and former NHRA champion Tanner Gray continued his partial slate with DGR-Crosley to round out the 18-car field. Thad Moffitt was once again entered and withdrawn, making it two in a row for the young Empire Racing pilot.

Snider led practice, which was anchored by Doheny, eight and a half seconds off the pace. There were swaps at both ends of the field for qualifying, with Venturini teammate Michael Self taking the pole and Brad Smith running what his team called a “conservative” lap to secure the last starting spot, this time only seven and three-quarters seconds off the hot lap.

By the end of the first lap, however, Smith was up to sixteenth, passing the cars of Doheny and Richmond. Richmond, in turn, would remain in last place for the first four laps until he would pass Doheny for seventeenth position. Doheny then spent three laps running in last place before he turned in. Tommy Vigh and Connor Hall pulled in after twelve laps, both citing vibrations as their reasons for exit. Electrical issues sidelined Richmond after 16 laps, and Brandon McReynolds rounded out the Bottom Five after a crash just before the midway point of the event. 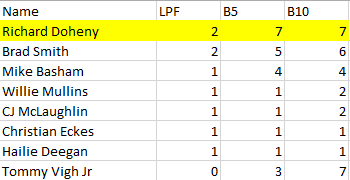