ARCA: Richard Doheny becomes eighth driver of #11 in as many races

Richard Doheny scored the 3rd last-place finish of his ARCA Menards Series career in Friday’s General Tire #AnywhereIsPossible 200 at Pocono Raceway when his #11 Consales Toyota dropped out with rear end issues after completing 3 of 80 scheduled laps.

The finish came in his 28th series start, and was his first since DuQuoin last fall, eleven races ago.

Last week's ARCA feature was also about Doheny. Why then, is this his first last-place finish since last year? After that article was posted, ARCA’s official score sheet later showed that C.J. McLaughlin was listed as a DNS in 25th, which falls under LASTCAR guidelines for a last-place finish. A few words on McLaughlin first: he was a motorcycle racer in his youth who then worked as a pipeline tester. He later found the itch to get back into racing, this time stock cars, and tested at Daytona in 2016 with an ARCA car before later running ACT Tour late models last summer. His ARCA debut came last year with Fast Track Racing at Lucas Oil Raceway, and over the winter signed with Andy Seuss and Our Motorsports, looking to do superspeedways as part of a 2019 that would also include scattered Truck and XFINITY starts with other organizations. He managed to stay on the lead lap at Talladega and came home just outside the top ten before crashing in qualifying at Charlotte, leading to a DNS and subsequently pulling his name off the Pocono entry list as well.

At its peak, 21 cars were on the entry list for Friday's race. Only 18 made it to the track, however, as three cars withdrew: McLaughlin, Thad Moffitt (who’s nursing a broken hand), and Con Nicolopoulos, running a second entry for Wayne Peterson. That left 18 cars, or the number of lead-lap cars in last year’s iteration of this event. Toledo last-placer Hailie Deegan returned for her second of six scheduled starts, local and ARCA mainstay Bobby Gerhart entered his traditional Pocono race, and Tim Richmond entered Wayne Peterson Racing’s #06, which was approved after testing. Raphael Lessard once again teamed up with KBR Development, this time running the team’s flagship #28 machine. Cole Glasson made his first start of 2019 and second overall with Win-Tron Racing, which scaled back to a part-time operation this year. Superspeedway ringers such as Scott Melton, Harrison Burton and Riley Herbst rounded out the entry list.

Ed Pompa returned to the Fast Track #1 car, which pushed Doheny to the 11. It's interesting to note the 11 car had the name of Jonas Fors on the name rails. Fors, a Swede with previous experience in K&N and ARCA, tested the #11 on Wednesday but was never entered for the race.

With qualifying rained out on Friday morning, early afternoon practice served as both practice and qualifying. Harrison Burton’s practice leading/pole winning time of 52.82 seconds would have put him 12th on the board in Happy Hour, better than three-quarters of the Hendrick Motorsports contingent. Doheny completed the slowest lap at a 61.95, a mere two-tenths off of Brad Smith in 17th and a second behind teammate Tommy Vigh Jr. in 16th.

Last place changed hands during pace laps, as Vigh pitted and then was issued a tail-end penalty for pitting before the green. In an accident-free race, the only four drivers who didn’t finish all failed to do so because of mechanical reasons: Doheny out first because of rear end problems, then Vigh with a faulty transmission, Gerhart with electrical issues (after bringing out the race’s only caution), and Smith with a vibration. Tim Richmond rounded out the Bottom Five, twelve laps down as the last car running.

*NOTE: All LASTCAR standings below have been updated to reflect the change in Charlotte’s last-place finisher.* 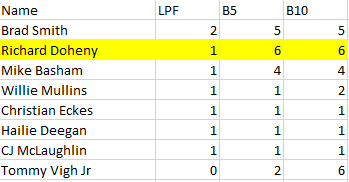