Dale Shearer finished last for the fourth time in his ARCA Menards Series career in Friday’s Shore Lunch 200 at Madison International Speedway when his #69 Shearer Racing Ford dropped out with clutch issues after 2 of 200 laps. The finish came in his 32nd career start, and was his first since Chicagoland in 2016, 32 races ago.

Shearer is a true independent racer who funds his career on his earnings off of his job as a computer programmer. He primarily runs his own #73 or #94, but occasionally runs his equipment with other teams, like Kimmel Racing at Daytona in 2016. A crash in his only start at Salem last year shelved his plans for the rest of the year, and he did not return until this weekend at Madison.

The Madison entry list included 18 cars, now a trendy number for ARCA events. The ARCA short-track ringers returned, including Sam Mayer, who was able to compete in his home state after the K&N East race at Thompson Speedway Motorsports Park in Connecticut was cancelled. Eric Caudell returned, and another Wisconsin driver, Dick Karth, made his series debut on the season and made his first start since this race a year ago.

In practice, Shearer was last among the eighteen entrants, 4.1 seconds behind leader Christian Eckes and 1.7 seconds behind 17th-place running Dick Doheny. Shearer was nearly five seconds behind pole winner Chandler Smith. Per ARCA timing and scoring, Karth’s #11 machine dropped to the back for the green but then passed Shearer on the first lap, leaving the #69 to run last until it pulled behind the wall.

Looking ahead to the season-long LASTCAR tally, while it was Shearer’s first last-place finish, it furthered Ford’s lead to three races over Toyota, and it put Kimmel Racing into a four-way tie for first in the owner’s championship, which is still wide open. There is also a tie between Brad Smith and Richard Doheny with two last-place finishes on top of the driver’s tables, leaving that battle to be decided after this, the halfway mark of the season. 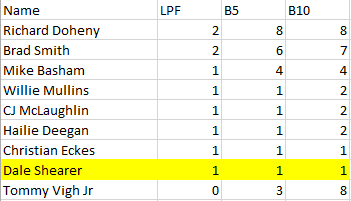