Chad Finchum picked up the 1st last-place finish of his NASCAR XFINITY Series career in Saturday’s Alsco 300 at the Charlotte Motor Speedway when his #42 Smithbilt Homes Toyota fell out with a blown engine after 5 of 200 laps.

A native of Knoxville, Tennessee, Finchum began racing go-karts when he was six, and drove to three championships in Bandoleros. According to his website, he graduated to Late Models by 2010 and won just his second time out at the Newport (Tennessee) Speedway. The next year, while continuing to rack up victories on local bullrings, he made his K&N Pro Series East debut at Greenville-Pickens, finishing 18th in a race won by Brett Moffitt. His own first win came five years later at his home track in Bristol, driving for retired XFINITY veteran Eric McClure.

The 2017 season saw Finchum make the move to XFINITY Series competition, where he first worked with Carl Long at Motorsports Business Management (MBM). His debut came at Dover, where he steered the #40 Chevrolet to a 34th-place finish after engine trouble. A 29th followed that summer at Kentucky, and he improved to a 28th in his return at Bristol. The #40 became Finchum’s regular ride in 2018, with sponsorship from Smithbilt Homes. His best finish of the year was a 14th at Daytona in July, but he also impressed that fall in back-to-back races in Kansas and Texas, finishing 16th and 17th. He even made his Cup debut with Long, again at Bristol, where a crash left him 33rd.

This year, MBM has increased its focus on the XFINITY Series with a four-car effort. For most of this season – except the plate races, where Max Tullman drove in his place – Finchum has driven the #42. The number was newest to the MBM effort, its Owner Points obtained after the closure of Chip Ganassi Racing’s XFINITY effort following the collapse of sponsor DC Solar. Cancelled qualifying efforts ended up giving Finchum outside-pole starts in his first two races this year in Atlanta and Las Vegas. His best finish of the year came the next time out at Phoenix, where he put the #42 20th on the grid, then finished 19th. Coming into Charlotte, he sat 29th in points.

Finchum was one of 39 drivers on the preliminary entry list for Charlotte, a list which didn’t at first have Jimmy Means Racing’s #52 despite David Starr’s earlier announcement of LoadChase.com coming on as sponsor. Starr was added by Wednesday, averting the team’s first non-entry since 2013, meaning two teams would miss the show. It was perhaps this reason why two of the sport’s owner-drivers – Morgan Shepherd and Mike Harmon – handed over the wheel to other drivers. Shepherd’s #89 Visone RV Chevrolet went to Cup regular Landon Cassill, who most recently raced the car last fall at Homestead. This time around, Cassill ran 14th in the opening practice and jumped to an impressive 9th in Happy Hour. In qualifying, he turned this 13th-fastest lap. It was the best starting spot by a Shepherd-owned car since July 3, 2009, when the veteran rolled off 10th under the lights at Daytona.

Driving Harmon’s #74 The Journey Home Project / The Sign Shop Chevrolet was Monster Jam competitor and part-time Truck Series driver Camden Murphy, who had not run in XFINITY since 2016. Murphy had originally been entered in the #17, which Bayley Currey tweeted was a collaborative effort between Rick Ware Racing, which provided the car, and Harmon’s team. Currey instead took the wheel of the #17, which carried Harmon’s red numbers on the door. Murphy’s turn in the #74 put him 23rd in the first practice, 22nd in Happy Hour, and he qualified 20th, just five spots behind Currey. It was the best starting spot for one of Harmon’s cars since another race at Daytona - February 21, 2015, when he started 19th.

With both Harmon and Shepherd’s cars in the race, two other drivers missed the show. Jairo Avila, Jr. climbed aboard B.J. McLeod’s #99 JW Transport Chevrolet, and though his lap of 171.200mph (31.542 seconds) outpaced four other drivers, he was too low in Owner Points to rely on a provisional. Also sent home was Dillon Bassett, who was set to run against his brother Ronnie Bassett, Jr. in the same XFINITY race for the first time. Unfortunately, Bassett’s #90 didn’t complete a lap, and was out-ranked by two other drivers who didn’t put up a time. One was the #4 Florida Watermelon Association Chevrolet of Ross Chastain, whose clutch malfunctioned in qualifying. The other was Chad Finchum.

By the narrowest of margins, Finchum started the race in the 38th and final starting spot. He’d run better in the lead-up to the race, putting up the 28th-best lap of 35 drivers in opening practice, then improved to 25th of 37 in Happy Hour. The issue was technical inspection – a delay put him on the five-minute clock, and the #42 couldn’t present in time to take a lap.

As the cars prepared for the start, Finchum gained a few spots as other drivers fell to the rear. Unapproved adjustments sent to the rear 25th-place starter Brandon Brown, debuting a new second team from the Brandonbilt Motorsports effort with his #68 Vero Chevrolet; 35th-place Justin Haley, who suffered a broken axle on his #11 Leaf Filter Gutter Protection Chevrolet; 15th-place Bayley Currey in the #17 and 37th-place Ross Chastain.

By one lap to green, all four of these drivers were back ahead of Finchum as the #42 joined others in voluntarily falling to the rear. Coming off Turn 4, FS1's cameras showed last place now belonged to Joe Nemechek - 31st on the grid and 19th in Happy Hour - making his first start in MBM's #13 Toyota. Ahead of him were four nearly identical black Chevrolets: 33rd-place qualifier Matt Mills in the #5 J.F. Electric Chevrolet alongside 27th-place Jeff Green in the #38 RSS Racing Chevrolet, then 20th-place Camden Murphy in the Harmon #74 and 23rd-place Josh Bilicki in the #93 RSS Racing Chevrolet. Finchum was now 32nd, just ahead of the break back to the four-car pack. On his bumper was the #78 Lake Norman Patio & Game Rooms Chevrolet of Vinnie Miller. Behind them was a carlength's open track back to the two-by-two rows of Bilicki, Murphy, Green, and Mills, then another carlength to Nemechek in last.

On the break, Nemechek eased through the gears, dropping back even further behind the four black Chevrolets. From Finchum’s tweets, the driver reported on the very first lap of the race that his car had an engine issue. By Lap 4, Finchum had slipped behind the black Chevrolets and was back to 37th, just a half-second in front of the trailing Nemechek. He took over last on Lap 5, now more than 11 seconds back of the lead, and pulled into the garage. The crew found a plug wire was off, then sent him back out there to see if it was resolved. It wasn’t – the #42 slowed on the apron and had to be pushed by a tow truck to the garage. The team was done for the day. Although Finchum’s account tweeted that it was a mechanical issue, the official results cited “engine.”

Green and Bilicki's black Chevrolets finished 37th and 36th, both out in the first ten laps. Next was Timmy Hill, one of Finchum’s teammates, who welcomed returning sponsorship from LeithCars.com on his Toyota, but lasted just 17 laps before his own engine let go. Rounding out the group was Landon Cassill, who turned 31 laps in Morgan Shepherd’s #89 before citing a vibration. Camden Murphy’s run in Harmon’s #74 nearly went the distance before a front hub failed after 173 laps, leaving him 29th, four spots ahead of Currey in the Ware / Harmon #17.

LASTCAR STATISTICS
*This marked the first last-place finish for the #42 in an XFINITY race since August 5, 2017, when Kyle Larson’s engine let go after 12 laps around Watkins Glen. The number had never before finished last in an XFINITY race at Charlotte. In fact, the number remains one of the rarest to trail a race in this series. It never one finished last between June 8, 1985 (Joe Kelly at Hickory) and July 18, 2009 (Kevin Hamlin at Gateway). 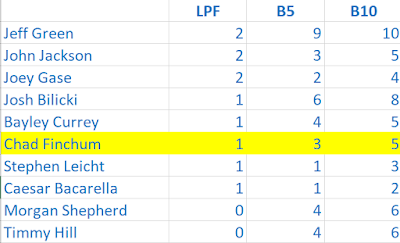