Norm Benning picked up the 13th last-place finish of his NASCAR Gander Outdoors Truck Series career in Friday’s JEGS 200 at the Dover International Speedway when his #6 H&H Transport Chevrolet completed 28 of 200 laps before he was flagged off the track for not maintaining minimum speed.

The finish also ties Benning for second in the all-time LASTCAR Truck Series standings with Wayne Edwards and Caleb Roark, and is one finish from series leader Johnny Chapman's total of 14.

For owner-driver Benning, an outspoken opponent of today’s 32-truck field limits, the battle remains to qualify for races. Following his most recent last-place finish at Eldora, he qualified for just three of the remaining ten races, failing to qualify four of times and not entering the final three. Prior to Friday’s race, Benning had already matched his DNQs of last season, starting with a stacked 39-truck entry list for the season opener at Daytona. He was then locked-in to Atlanta after qualifying was rained out and secured a spot in Las Vegas after two other teams withdrew, but another big entry list in Martinsville sent him home, and he was the lone non-qualifier in Texas.

The preliminary entry list for Dover showed that Benning would have to again fight for his life in qualifying – 35 trucks were entered, meaning three would miss the show. That changed by mid-week, however, as three other underfunded efforts pulled their entries. The biggest story of the three was Cory Roper, who showed flashes of brilliance in the first part of 2019 and sat 15th in points. Over the break, Roper encountered funding issues for his #04 Preferred Industrial Contractors Ford and had to scale back from full time to part-time. Also pulling out were Travis Kvapil in Mark Beaver’s #1 Chevrolet and owner-driver Tony Mrakovich’s #43 Street Stores Hardware Chevrolet.

Though locked-in to Friday’s field, Benning now struggled for speed. He didn’t participate in opening practice, then turned in the slowest lap in Happy Hour at 131.637mph (27.348 seconds), some 4.412 seconds off the session’s fastest time by Johnny Sauter. He picked up speed in qualifying with a lap of 135.644mph (26.540 seconds), but so did the rest of the field, leaving him still more than four full seconds off Brett Moffitt’s pole lap. This would put Benning 31st on the grid, however, as one truck didn’t turn a lap in qualifying.

That 32nd-place starter was Ryan Sieg, who was not only making his first Truck Series start in four years, but for just the second time in his career would be driving for a team other than his family’s RSS Racing program. This time around, he drove the Reaume Brothers Racing #33, and brought with him three of the RSS team’s sponsors: Nite Owl Contracting, Lombard Brothers Gaming, and Alabama Soda & Abrasive Blasting. Sieg was taking the place of team owner Josh Reaume, who moved to the team’s second #34 truck in what was going to be Daniel Sasnett’s second series start. Reaume took 29th on the grid in Sasnett’s Surface Prep Supply Chevrolet.

Prior to the start, Sieg incurred a redundant tail-end penalty for an engine change on the #33, an issue that also sent Matt Crafton’s #88 Shasta / Menards Ford back from the 5th starting spot. Also docked for unapproved adjustments were 25th-place Tyler Hill, making his first start in Hill Motorsports’ #56 Southern Maryland Crane Rentals Chevrolet and 28th-place Jennifer Jo Cobb in the #10 Driven2Honor.org Chevrolet. The fifth penalized driver was Spencer Boyd, who clobbered the wall in opening practice, sending him to a backup #20 DLX Mattresses Chevrolet.

When the race began, it was Benning who slipped to last, falling 7.429 seconds back of the lead at the end of the first lap. By then, trouble had already broken out up front. One of the surprises in qualifying had been Brennan Poole, who put his #30 All Out Motorsports Toyota 8th on the grid. On the first lap, Poole was in the thick of traffic when his truck skated off Turn 2 and made contact with the right-rear. The damage forced him to pit road under green on Lap 4, costing him a lap and taking last from Benning. Poole incurred a speeding penalty in the process, dropping him multiple laps down on Lap 13. If Poole finished there, it would have marked the driver’s first last-place run in NASCAR’s top three series, and the first for #30 in Truck Series history. That all changed moments later.

Benning’s black flag for not maintaining minimum speed came on Lap 22, but he wasn’t the only one. Reaume was also struggling to keep up in the #34 and was called in on the same lap. Both trucks pulled in on Lap 24 and returned to action. Reaume sped off pit road in the process, drawing a stop-and-go, and when he served this penalty, he sped again. On top of all this, Reaume’s truck was overheating from debris on the grille, and the crew couldn’t remove the debris while each penalty was being assessed. These compounding issues dropped Reaume behind Poole on Lap 31 and into last place.

On Lap 38, Benning was parked for not maintaining minimum speed. Over the radio, Reaume’s crew remarked that other trucks were running slower than the #6, and wondered why none of them were penalized. Regardless, Reaume caught up to Benning at the end of Stage 1 and moved past Benning under caution on Lap 48. Reaume would also be flagged off the track on Lap 74, ending his day in 31st. Poole managed to climb to 23rd after he crashed once more with nine laps to go, eliminated under the Damaged Vehicle Policy.

Rounding out the Bottom Five were Korbin Forrister, whose #7 Toyota crashed on the frontstretch past the halfway point, 29th-place Jesse Little with track bar issues on the #97 JJL Motorsports Ford, and 28th-place Reid Wilson, whose alternator failed on the #44 TruNorth / Paul Jr. Designs Chevrolet. Forrister, Little, and Wilson scored their first Bottom Fives of 2019.

LASTCAR STATISTICS
*The only other time in Truck Series history that the last-place finisher was listed as out for being too slow came on July 31, 2004, when Loni Richardson’s #0 Value Tool & Engineering Chevrolet was flagged off after 8 laps of the Line-X Spray-On Truck Liners 200 at Michigan.
*This was also the first time that both Benning and the #6 finished last in a Truck Series race at Dover. 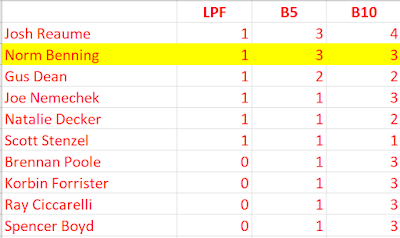