Erik Jones picked up the 4th last-place finish of his Monster Energy NASCAR Cup Series career in Sunday’s 60th Annual Coca-Cola 600 at the Charlotte Motor Speedway when his #20 Reser’s Main St. Bistro Toyota was eliminated in a crash after 22 of 400 laps.

Following a rough night in the All-Star Race, Jones returned to the Coca-Cola 600, where he finished 7th as a rookie for Furniture Row Racing and 19th last year for Joe Gibbs Racing. The race would come just days after Gibbs was himself inducted into the NASCAR Hall of Fame. It would also see Jones honor his late great uncle Corporal Richard Ellis Eckert, a member of the U.S. Marine Corps who was killed in action on Okinawa on April 12, 1945. As part of the NASCAR Salutes program, Corporal Eckert’s name would be printed on the banner above the windshield of Jones’ #20 Toyota.

Jones’ car showed speed early, ranking 11th in opening practice, 10th in the second session, and jumped to 6th in Happy Hour. In single-car qualifying, Jones ended up just 16th on the grid, timing in at 182.082mph (29.657 seconds). With exactly 40 cars entered for as many spots, all entrants started the race.

Starting 40th was Joey Gase in Motorsports Business Management’s #66 Toyota. Following last week’s Monster Energy Open, the MBM team elected not to enter their #46 Toyota following an apparent fuel cell issue during the qualifier. The omission moved Joey Gase from the non-entered #46 to the #66 driven previously by Timmy Hill. The blue car picked up sponsorship from Big Smoke BBQ, who catered for the MBM team at the track, and carried longtime team sponsor O.C.R. Gaz Bar on the quarter-panels by race day.

The only driver scheduled to join Gase at the back of the field Sunday was Matt Tifft, who for the second time this month failed inspection multiple times in his #36 Surface Suncreen / Tunity Ford. Unlike at Dover, Tifft’s car failed just twice instead of three times, sending him to the rear and ejecting a crew member, but avoiding a first-lap pass-through penalty. During the pace laps, Bayley Currey was slow coming off pit road and re-joined the pack in his black #52 Rick Ware Racing Ford. Currey’s car was the latest of the Ware team’s “squadron” of David Marrero-designed paint schemes resembling famous fighter planes. Currey’s #52 SR-71 Blackbird and Cody Ware’s #51 P-40 Warhawk joined B.J. McLeod’s returning Tuskegee Airmen “Red Tails” #53 from the Monster Energy Open.

As Currey got back up to speed, he passed Bubba Wallace, whose #43 Coca-Cola Orange Vanilla Chevrolet was stopped on the apron of Turn 4. Wallace, set to start 29th, came down pit road, where the crew helped him with the window net. He managed to rejoin the race just in time for the field’s three-wide salute, then was slotted back in his proper starting spot.

When the field returned to two-by-two formation, the rear of the field changed once more. Gase originally lined up to the outside of 39th-place Quin Houff in Spire Motorsports’ #77 NASCAR Mobile App Chevrolet. Ahead of them were the penalized Tifft, who was on the inside of original 35th-place starter Ross Chastain. Chastain’s #15 Chevrolet picked up new sponsorship from Cross Country Adjusting, switching from a black paint scheme to a white-and-blue layout. Houff then pulled behind Gase to take over 40th, and Gase found himself 38th to the outside of 37th-place Reed Sorenson in the #27 VIPRacingExperience.com Chevrolet.

The green flag fell, and Houff closed the gap on Gase to his outside, leading to a brief side-by-side battle. Gase first prevailed, dropping the #77 to last halfway down the backstretch. Houff then pulled low in Turns 3 and 4, drawing inside of Gase, and dropped the #66 back to last on Lap 2. By this point, Gase was 11 seconds back of the lead, and on Lap 6 radioed that his water was at 245 degrees. Now by himself, Gase fell into the grasp of the leaders, and on Lap 17 William Byron cut to his inside at the stripe, pulled to the inside, and put him the first car one lap down.

At almost that exact moment, 32nd-place starter Landon Cassill pulled down pit road in his patriotic-themed #00 StarCom Fiber Chevrolet. The driver reported smoke in the cockpit, and the crew was working on at least one of the hood flaps which had come loose and needed to be screwed back into place. The crew jacked up the car and looked underneath, losing multiple laps in the process. On Lap 23, the team dropped the jack and Cassill returned to action – just as the first caution fell for a wreck.

On that 23rd lap, Jones was running 12th when the right-front tire failed in Turn 4, sending him hard into the outside wall. Jones kept his car in the outer groove, stopped just past the start / finish line, and dropped the window net. He climbed out under yellow, done for the day. Track officials towed the #20 behind the wall using the entrance to the infield portion of Charlotte’s Roval configuration near the end of pit road. Under that caution, Cassill passed Jones for last, where the #20 would remain. Jones was uninjured and released from the care center soon after. It was Jones' first bottom-five finish of 2019.

Finishing 39th was Matt DiBenedetto, also the victim of a right-front failure when his #95 Procore – Safety Qualified Toyota slapped the wall off Turn 2. The 38th spot fell to Cody Ware, whose Jacob Companies P-40 Warhawk Ford had an issue with the rear gear that eliminated him during the DiBenedetto caution. Cassill only climbed to 37th after his brief stay in last, the car filling with smoke once more due to a busted oil cooler. Rounding out the group was Chastain, whose new-look #15 made it just 134 laps before suspension woes.

Both the #77 of Quin Houff and the #53 of B.J. McLeod benefited from a pair of Lucky Dogs in the first half of the race, and each were still on the lead lap just past the race’s halfway point in 28th and 27th, respectively. Both would ultimately finish under power in 28th and 29th, Houff ahead of McLeod, each four and five laps down.

Dodging the night's many wrecks was Corey LaJoie, who finished 12th. It was just one spot short of matching his career-best series finish of 11th, and was easily his best run on a non-superspeedway race. The run was all the more sweet as representatives of his sponsor Superior Logistics Inc. were in attendance.

David Ragan also enjoyed one of his best recent runs on a non-plate track. Welcoming back Daytona sponsor Select Blinds, Ragan worked his way into the Top 10 late in Stage 3, then stayed out on old tires for the final five-lap restart. Though asked by Truex if he'd fall to the rear, Ragan restarted up front and stayed arpund 3rd for a couple laps before settling into 15th.

LASTCAR STATISTICS
*This marked the first last-place finish for car #20 in a Cup points race at Charlotte.
*Jones is also the first driver to finish last in both the NASCAR All-Star Race and the Coca-Cola 600 in the same season. Prior to this year, the closest it had come to happening was when Kurt Busch trailed the 2005 All-Star Race, then the 600 in 2006. 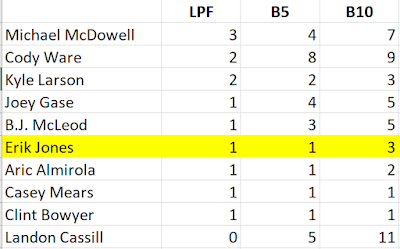