Cody Ware picked up the 5th last-place finish of his Monster Energy NASCAR Cup Series career in Saturday’s Digital Ally 400 at the Kansas Speedway when his #51 Jacob Companies Chevrolet finished under power after 245 of 267 laps.

The finish, which came in Ware’s 18th series start, was his second of the season and first since Martinsville, six races ago. In the Cup Series last-place rankings, it was the 24th for car #51, the 38th where the car was still running, and the 762nd for Chevrolet. Across NASCAR’s top three series, it was the 36th for the #51, the 45th where the car was running, and the 1,658th for Chevrolet.

Kansas marked Ware’s third-consecutive start in the #51 since his drive at Martinsville, but he wasn’t originally scheduled to drive the car. Jeb Burton was on the preliminary entry list, set to return to the car for the first time since Richmond. But it was Ware’s name above the door at Kansas, and the newcomer looked to build on his season-best 28th at Talladega earlier that month.

The disallowed times lifted Ware from 37th to 28th on the grid. One spot behind him in 29th was the original last-place starter, Reed Sorenson, whose #27 Harrah’s Chevrolet was the only car not turn a lap in qualifying. The disallowed filled out the field based on Owner Points with Logano 30th followed by Truex, Elliott, Almriola, Suarez, Larson, Dillon, McDowell, Cassill, Hill, and Gase. Gase, who finished last in Trucks the night before, inherited the last spot since his #46 Toyota team was making its first-ever start for MBM.

The order changed once more a lap from the start when two more cars fell out of line: Sorenson’s #27 and Quin Houff’s #77 Oilfire Chevrolet from Spire Motorsports. This moved eight of the ten disallowed drivers up two additional spots with Houff now in 36th, Cassill up one spot to 37th, Sorenson 38th, Gase up one spot to 39th, and Hill now taking over last in his #66.

On the break, Hill held the 40th spot, but was already closing on a side-by-side battle for 38th between Sorenson in the low lane and Houff up high. At the stripe, Hill pulled alongside Houff, but the #77 got the drive off and kept Hill’s #66 in last. By Lap 6, Gase had been shaken out of the tail end battle, and Hill was now glued to his rear bumper in Turn 1, much to the surprise of the MBM crew. By Lap 11, Hill lost ground to Gase, who was trying to track down Ware in 38th, some distance ahead.

On the 14th circuit, Hill closed the gap on his teammate off Turn 4 and passed him up high, dropping Gase to last. The next time by, race leader Kevin Harvick made Gase the first car one lap down, moving past him on the high lane. By then, Gase had concerns over his car’s handling, saying “it’s all over the place,” and also believed his car picked up a piece of debris on the grille. Gase made it to the competition caution on Lap 30, then dropped Hill back to last since his pit stall was several stalls in front of the #66. The spot changed hands the next time by when Gase made a second stop, dropping him behind Hill. Gase re-passed Hill on the Lap 37 restart, then Hill, now two laps down. caught Ware on Lap 48, passing the #51 on the backstretch to put him last for the first time.

On Lap 50, Ware found himself caught between leaders Kevin Harvick and Clint Bowyer, who split him on either side just past the start / finish line, putting him a third lap down. Six circuits later, Ware was called to pit road, but overshot the entrance and lost valuable time making a slower lap around. He came back in, saying “I about wrecked myself coming onto pit road – it’s out of control.” He returned to action now five laps in arrears, but still struggling with the handling in the rear of the car.

On Lap 72, the #51 team talked about bringing Ware’s car to the garage. The team did so on Lap 82, shortly after the caution came out to end Stage 1. In the garage, the crew hanged springs, including a “2000” spring in the right-rear. Just eight circuits later on Lap 90, Ware re-fired the engine, stopped in his stall for fuel, and returned to the track, 18 laps back.

Ware remained on track the rest of the night, and lost laps at a slower rate than before. He was 19 down by Lap 108, 20 down by Lap 124, and fell 22 back after a pit stop completed on Lap 144. He started to lag back on restarts, letting others line up ahead of him, and on two occasions was by himself as the rest of the field pulled away. On Lap 167, however, he took the green alongside Timmy Hill’s #66, caught Gase’s #46 two laps later, and passed both off Turn 4. Though twelve laps behind the two MBM cars, Ware still looked to race whoever he could. He fell 23 laps down by Lap 185, 24 down by Lap 201, and 25 by Lap 231. When the race restarted on Lap 245, Ware didn’t let traffic go by, and positioned himself a couple rows up.

With an eleven-lap gap up to 39th-place, Ware secured last place under green with twelve laps to go. And with seven circuits remaining, he again found himself in the middle of a lead battle at the worst possible spot. Coming off Turn 4, Brad Keselowski had worked to the outside of Alex Bowman, and just about had the #88 cleared. Ware again hugged the inside lane, which was also where Bowman was running as Keselowski passed by. The caution fell moments later for Matt DiBenedetto’s engine failure on his #95 Digital Momentum / Hubspot Toyota. Just three laps down at the time, DiBenedetto only fell to 36th at the finish, his first Bottom Five of 2019.

Ware didn’t lose another lap and finished 26 down in 40th, still under power at the checkered flag. Hill and Gase finished 39th and 38th with Gase’s new #46 a full lap ahead of Hill. Cassill ran 37th, visibly off the pace in the final moments.

LASTCAR STATISTICS
*This marked the first last-place finish for car #51 in a Cup Series race at Kansas.
*This was also the first time a Cup driver finished last while still under power at Kansas. In the process, Ware came just two laps short of tying 2018 last-placer Ty Dillon for the most laps complete by a last-place finisher at Kansas (247).
*This is the eighth time in the last two seasons that the last-placer of a Cup race completed 200 or more laps. 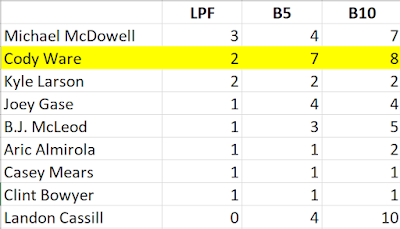