B.J. McLeod picked up the 2nd last-place finish of his Monster Energy NASCAR Cup Series career in Monday’s Gander RV 400 at Dover International Speedway when his #52 Belmont Classic Cars Chevrolet fell out with engine issues after 96 of 400 laps.

The finish, which came in McLeod’s 29th series start, was his first of the season and first since last July at Pocono, 26 races ago. In the Cup Series last-place rankings, it was the 27th for car #52, the 686th from engine trouble, and the 761st for Chevrolet. Across NASCAR’s top three series, it was the 53rd for the #52, the 1,069th for an engine, and the 1,656th for Chevrolet.

Much like fellow underdog Ross Chastain, who has competed in every Cup, XFINITY, and Truck Series race this season, McLeod is one of the busiest drivers in the garage area. The 2019 season has seen the Florida native not only driver XFINITY for JD Motorsports and Cup for Rick Ware Racing, but has also continued to develop his three-car XFINITY Series team, B.J. McLeod Motorsports. McLeod was even entered in this year’s Truck Series race in Atlanta before team owner Jacob Wallace withdrew the #80.

While McLeod’s only Cup finish better than 28th was a 19th after he and teammate Cody Ware spun in this year’s Daytona 500, it’s significant to note that McLeod had only failed to finish twice coming into Sunday – a transmission failure at Richmond, and the blown engine at Pocono that led to his only last-place finish.

Dover marked McLeod’s sixth Cup race of the season and first since Texas, where a 31st-place showing was his best since Daytona. It was also his fourth of the year driving Ware’s second car, the #52, which this week was a Chevrolet sponsored by Bristol team sponsor Belmont Classic Cars. The black car started the weekend 33rd of 37 drivers in opening practice and qualified 34th with a speed of 153.951mph (23.384 seconds), second-slowest of the 35 drivers who completed a lap. He then turned the 34th-best lap in Happy Hour. On top of McLeod’s 27th-place finish in Saturday’s XFINITY Series race, one of his drivers, Tommy Joe Martins, parlayed just three sets of tires, two of them 15-lap scuffs, to a 21st-place finish.

Starting last on Sunday’s originally scheduled date was the #27 Chevrolet of Reed Sorenson, who along with Premium Motorsports teammate Ross Chastain in the #15 Low T Centers Chevrolet did not turn a lap in Friday’s return of single-car qualifying. In fact, along with 35th-place qualifier Quin Houff in Spire Motorsports’ #77 FALCI Adaptive Motorsports Chevrolet, the final three spots fell to cars prepared in Jay Robinson’s shop. Sorenson and Chastain changed engines, which may have contributed to their absence on Friday, so both would serve tail-end penalties on race day.

Four more drivers fell to the back for failing pre-race inspection, headed by 5th-place starter Alex Bowman in the #88 Nationwide Small Business Chevrolet. Joining him were 13th-place Martin Truex, Jr. in the #19 SiriusXM Toyota, 29th-place Ryan Preece in the #47 Kroger Chevrolet, and Matt Tifft in the #36 Tunity / Surface Sunscreen Ford. Tifft’s car failed three times, meaning he would not only start in the back, but would have to serve a pass-through penalty at the start of the race. Not one of those four fell to the rear on Sunday’s pace laps, however, as persistent rain forced the cars back to pit road with Sorenson’s #27 still lined up in the rear. This proved timely for Sorenson’s team, which was having radio issues during those laps.

The race restarted on Monday morning, and on the first lap, Tifft pulled to the outside of the trailing Chastain and Sorenson as he prepared to come down pit road. The #36 successfully made its stop-and-go penalty, and resumed the action one lap down. Fighting a tight condition, Tifft lost a second circuit by Lap 12, and a third by Lap 36. The driver then reported “something’s broke” on Lap 47, and said he could only drive the car “if I drive it super deep.” The car didn’t respond to adjustments, and on Lap 84, Tifft radioed that “something in the front end is breaking” and complained of a strange smell in the cockpit. Though now four laps down, Tifft closed the gap on Houff’s #77, which he passed into Turn 3 on Lap 95. This turned out to be a pass for position as Houff, 36th at the time, had also fallen four laps back.

Houff only held the spot until Lap 101, when McLeod came down pit road and fell seven laps down, three behind the #77. He returned once more on Lap 103, saying the gauges read 274 degrees. Citing a leaky head gasket, McLeod didn’t stop in his pit stall this time and was directed back to the garage, pulling out in the Turn 1 exit. “We don’t need to go back out there,” said someone on the radio. McLeod pulled into the back side of the garage between Turns 1 and 2, and the crew bucked up their driver. “We had a freaking good car out there and you were doing awesome,” said someone over the radio. “We had a 25th-place car out there.” This was no mere boast. While two laps down on Lap 72, they were 31st, a number of spots ahead of teammate Cody Ware.

On Lap 116, McLeod’s car was pulled off RaceView. The next time by, there was some confusion among the crew whether or not to pack up the pit box. “We’re done, David, go ahead and pack up the pit box,” came the answer. “The head’s broke.”

Houff ended up 36th at the finish after slapping the Turn 2 wall on Lap 116, then being flagged off laps later for running too slow. Sorenson finished 35th, the third and final retiree, after a blown engine which came after an extended stop for a battery change on Lap 121. Ware finished 34th, the last car on track, 17 circuits back of race winner Martin Truex, Jr. Ricky Stenhouse, Jr. rounded out the Bottom Five after his #17 Little Hug Fruit Barrels Ford was damaged in a Turn 1 incident after a blown tire.

LASTCAR STATISTICS
*This marked the first last-place finish for car #52 in a Cup race at Dover since September 18, 1994, when Brad Teague’s #52 Bender Plastics Ford fielded by Jimmy Means broke the timing chain after 29 laps of the SplitFire Spark Plug 500. Incidentally, that marked the first time a Cup driver finished last with a timing chain issue since September 25, 1983 by Morgan Shepherd at Martinsville. It wouldn’t happen again until October 15, 2005 by Mike Wallace at Charlotte. 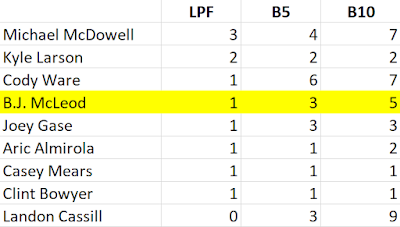