UPDATE (June 3): After press time, Doheny was out-ranked for last by another driver who did not start, as reported in Soquet's next article here.

The finish came in his 27th series start, and was his first since DuQuoin last year, ten races ago.

Since we last profiled Doheny at Springfield last year, Doheny has continued driving for Andy Hillenburg and Fast Track Racing. This year, he has driven the #1 car, which has now been entered in every race this season as a third team for Fast Track. The #1 car was a partnership for its entries last year between Hillenburg and Wayne Peterson Racing, fielding entries for Peterson and Dale Matchett. Fast Track has bucked the trend for ARCA, where expansion is now the exception rather than the norm with the departure of 2018 champions MDM Motorsports and the scaling back of efforts from many teams, including 2016 champions Ken Schrader Racing.

The Charlotte race last year was a highlighted return to the ARCA schedule, and an eventful race lived up to the hype. This year, the car count was still strong, at least compared to short tracks. On this, the first intermediate on the ARCA schedule, 25 cars entered, with Doheny’s car the last to be entered, never showing up on any entry lists until first practice results. Joining him were a number of traditional superspeedway efforts, among them Andy Seuss, Bryan Dauzat, and Willie Mullins. Codie Rohrbaugh coupled this event with his Gander Outdoors Truck Series slate this year, and Gus Dean did the same, still piloting his familiar #32. Also, much like ARCA has its dedicated short track racers, it has its dedicated superspeedway racers: Riley Herbst, Harrison Burton, Scott Melton, Con Nicolopoulos and eventual winner Ty Majeski filled out full-season rides, and Thad Moffitt continued his half-season in the 46 car.

An odd collection of circumstances filled out the field. Tanner Gray, C.J. McLaughlin, and Brandon McReynolds continued undisclosed-as-of-yet partial efforts on the season, and reigning champion Sheldon Creed returned for a one-off in the GMS Racing #21. Brad Smith also resumed his team’s effort after skipping the previous race at Toledo due to engine issues. Two drivers made their series debuts on Thursday: Devin Dodson, a Maryland driver who made partial K&N East and West efforts with Jefferson Pitts Racing last year, drove the Vizion Motorsports #35 (back for the first time since Daytona) and Jason Miles, who recently made his K&N East debut with Patriot Motorsports Group at South Boston, drove the Fast Track Racing #11 car.

Practice saw some familiar names to longtime ARCA fans at the bottom of the leaderboard: Smith, Doheny and Nicolopoulos were all within two-tenths of each other from 23rd to 25th. Qualifying saw Doheny fall almost a second behind Smith as slowest among cars who took a lap, but he wouldn’t start there. A crash for Willie Mullins in crash meant he couldn’t complete a lap, leaving him to start 25th. McLaughlin completed a lap in qualifying but also crashed, and the damage proved to be terminal for his Our Motorsports team as the #09 withdrew before the start of the race.

Before the start of the race, the Mullins group repaired the car but then incurred a redundant tail-end penalty for unapproved adjustments. By the end of Lap 1, Miles was dropped to last of the 24 cars that took the green. He stayed there until Lap 7, when he dropped Con Nicolopoulos to last. Nicolopoulos had just recently passed Miles again until Doheny parked his car from the 17th position, at the time running ahead of ARCA championship contender Christian Eckes, who was dealing with tire issues. Brad Smith parked his lone composite body a lap after Doheny, and it would be thirty more laps until another car retired, as Nicolopoulos was the victim of a crash at the entrance to pit road. Dodson’s #35 battled issues during the race and only completed 72 laps, leaving him the last car running at the finish. McReynolds rounded out the Bottom Five, his #28 falling out with the unusual reason of “axle.” 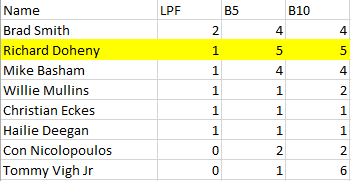