Michael McDowell picked up the 33rd last-place finish of his Monster Energy NASCAR Cup Series career in Sunday’s GEICO 500 at the Talladega Superspeedway when his #34 Love’s Travel Stops Ford was collected in a multi-car accident after 10 of 188 laps.

With the finish, McDowell has now tied Joe Nemechek for the most last-place finishes in Cup Series history. Nemechek has had sole position of that record since March 30, 2014.

Since his last feature on LASTCAR, McDowell had finished 24th or worse in every race but one – a strong 15th in Texas. Two weeks ago in Richmond, he suffered a hard crash midway through the race, and would have finished last for a third time in 2019 had Kyle Larson not wrecked in the same corner more than 100 laps earlier. Talladega held the promise of a return to form for both driver and team, who together started the year with a 5th-place finish in the Daytona 500. But in his last four Talladega starts, he’d finished no better than 30th, including a last-place run just last fall.

McDowell showed some strong speed early, ranking 4th in opening practice, just seven-thousandths off Kurt Busch’s top speed of 202.671mph. After NASCAR made further adjustments to the rear spoilers to reduce speeds in Happy Hour, the #34 ranked just 30th overall. The rollercoaster continued into Saturday’s qualifying session, where he stood 7th in Round 1 and made Round 2, where he anchored the group with a speed of 190.563mph (50.251 seconds). The run put him 12th on the starting grid.

Starting 40th and last on Sunday was Cody Ware, back in father Rick’s #51 Jacob Companies Ford for the first time since a frustrating last-place finish in Martinsville (LINK). Ware would incur a redundant tail-end penalty, one of eight for unapproved adjustments. Joining him at the rear were Ryan Newman, Denny Hamlin, Ricky Stenhouse, Jr., Kyle Busch, Martin Truex, Jr., Erik Jones, and Reed Sorenson. Also falling back was Brendan Gaughan, who required a driver change. On Saturday, Gaughan attended his child’s First Communion and had Tyler Reddick qualify his #62 Beard Oil / South Point Hotel & Casino Chevrolet in 29th. Reddick, Saturday’s XFINITY winner, handed back the wheel on Sunday.

When the race began, Gaughan and Ware were in the final two spots, and Gaughan took the last spot. By Lap 4, the spot fell to Ross Chastain, driving Premium Motorsports’ #15 Low T Centers Chevrolet. Two circuits later, Stanton Barrett took over the spot in his return to the Cup Series for the first time since the Roval last fall. Barrett’s #52 Huski Chocolate Chevrolet quickly set to work on Reed Sorenson’s unsponsored #27 Chevrolet, Chastain’s teammate at Premium. Coming to start Lap 10, Barrett had worked past Sorenson, who now held last, but stayed in the tire tracks of #52. The next time by, trouble brought the last-place battle to an abrupt end.

It happened at the front of the pack. Bubba Wallace had a strong start, charging from 28th on the grid into the Top 5 in just ten laps. As his #43 World Wide Technology Chevrolet crossed the stripe, he gave a bump to his friend Ryan Blaney in the #12 Menards / Knauf Ford. The rapid closing rate of the new aero package forced Wallace to back off, and both Blaney and Wallace fought to keep control. While Blaney managed to keep going, Wallace clipped the apron and spun up the track – directly into McDowell’s path. Towing along teammate Matt Tifft as the two made a bid for the lead, both were in the wrong place at the wrong time. Wallace collided with McDowell, and a pan behind the splitter came out, lodging itself in the nose of Tifft’s #36 Surface Sunscreen / Tunity Ford. Behind them, Denny Hamlin, Clint Bowyer, and Kevin Harvick were also collected in a secondary crash.

Under the ensuing yellow, McDowell and Wallace were towed behind the wall. At first, it was Ryan Newman who was classified last for damage incurred behind the left-front wheel on his #6 Acorns Ford. The position then changed to Kevin Harvick, who managed to keep his #4 Busch Beer Flannel Ford rolling after contact from his teammate Clint Bowyer. Harvick returned to attempt another lap, and thus passed both McDowell and Wallace to take 38th before his own car stalled on the apron, done for the day. Tifft’s crew, unable to remove the pan from the #36, also turned a lap before they exited the race. The Bottom Five was filled by Denny Hamlin, who returned to action with heavy damage to the right-front corner. After 80 completed laps, the #11 FedEx Express Toyota fell off the pace on the backstretch, then pulled behind the wall.

Hamlin and Harvick picked up their first Bottom Fives of 2019.

The underdog of the day was very nearly Justin Haley, who impressed in his Cup Series debut. Nine months after a controversial yellow-line rule penalty cost him an XFINITY Series win at Daytona, Haley was selected to drive for Spire Motorsports, a team which had finished no better than 22nd all season. Carrying his sponsorship from the Fraternal Order of Eagles, and racing on his 20th birthday, Haley made his way into the Top 10 in Stage 1, where he finished 11th. He remained in and around the Top 20 through the first part of Stage 3, where he lost a lap, then caught on to the tail end of the group. The strong run ended when he was collected in a pileup triggered by Aric Almirola and Chris Buescher. Haley finished 32nd.

Instead, the top underdog became Brendan Gaughan, who worked his way from last on the grid to lead five laps and finish 8th. It was Gaughan’s first top-ten finish at Talladega since his career-best 4th in 2004 and his first in any Cup race since July 1, 2017, one of his first starts for Mark Beard.

Also turning heads was Reed Sorenson, who earned the Lucky Dog on Lap 133 and finished 18th. It marked the first time Sorenson finished inside the Top 20 of a Cup race since October 19, 2014, also at Talladega, when he drove for Tommy Baldwin Racing.

LASTCAR STATISTICS
*This marked McDowell’s second-straight last-place finish at Talladega. Last October, he turned the second-most laps of any Cup last-placer at this track. 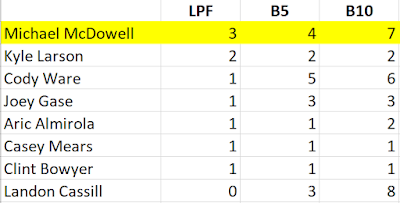