Brad Smith finished last for the 14th time in his ARCA Menards Series career in Sunday’s rain-shortened Kentuckiana Ford Dealers 200 at Salem Speedway when his #48 Copraya.com Website Ford finished only 1 of 101 laps before retiring with oil pump issues.

The finish came in Smith’s 331st series start and was his first since the 2018 season-finale at Kansas Speedway, three races ago.

The Brad Smith team has returned for the 2019 season in much the same fashion as it did in 2018 – at Daytona, the team had a red composite-body Chevrolet, but at Five Flags, the team returned to the white steel-bodied Ford that became synonymous with the team last year. Smith later said in a radio interview that he owns two composite bodies, which will come in handy when the series hits its summer intermediate swing.

A month between short track races did little to boost the car count for the series, which featured 20 cars at Five Flags Speedway. The same amount of cars were listed on the preliminary entry list, but only nineteen participated in on-track activity. Will Kimmel, set to pilot a second entry for his Kimmel Racing team, withdrew. The short-track brigade was in full force, however, as powerhouses Chandler Smith, Carson Hocevar, Sam Mayer, Corey Heim and Ty Gibbs stayed in their rides.

Tommy Vigh Jr. returned to the #10 car in a full-season effort, as team owner Andy Hillenburg confirmed on Twitter over the weekend. Mike Basham again piloted the #69 for Kimmel Racing, and the Basham family patriarch, Darrell, made his first appearance of 2019 in a home race for the team, sporting his familiar #34. Richard Doheny and Morgen Baird filled out the second and third Fast Track Racing entries, and newly-elected politician Alex Clubb brought his #03 for the first of six planned starts in 2019.

Young hot shoe Gibbs led practice with a lap of just over 17 seconds, pacing a relatively close practice session. Smith’s completed lap took over a minute, but among cars that ran laps at full speed, Darrell Basham was last with a lap of nearly 19.7 seconds, about 2.5 seconds off of Gibbs’ fast time. Smith was not able to set a time in qualifying, as oil pump issues were beginning to hamper the team’s efforts. Clubb was the slowest car on track during qualifying, trailing the field with a lap of just over 20 seconds.

At the beginning of the race, Harrison Burton had to drop to the rear as a replacement driver for Christian Eckes, who was ill for the race. As the #15 car drove through the back of the pack relatively quickly, the racing also came fast among the backmarker cars. While ARCA’s live commentary noted that Smith went to the garage after four laps, official timing and scoring listed the 48 off after only one.


Doheny pulled behind the wall after three laps, and the younger Basham followed soon after, turning in after eight circuits. Morgen Baird lasted over thirty laps before his Fast Track Racing machine fell out of the race. The last Bottom Five spot, however, was up for grabs for a while during the race. Clubb, Tim Richmond and Darrell Basham were racing on the same lap for an extended period of time, with Clubb eventually falling three laps behind the other two cars. He stayed there as the last car running until the race was called for rain after 101 of 200 laps. 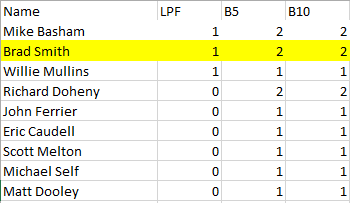