Christian Eckes finished last for the 1st time in his ARCA Menards Series career in Saturday’s General Tire 200 at Talladega Superspeedway when his #15 JBL Audio / Venturini Motorsports Toyota crashed out after 39 of 76 laps. The finish came in Eckes’ 30th series start.

The Middletown, New York driver has become one of the most well-known prospects in stock car racing over the past year. His Toyota Racing Development deal has seen him prominently featured in TRD’s ARCA program with Venturini Motorsports, collecting wins at Salem, Springfield and IRP last year. He also debuted with Kyle Busch Motorsports in the NASCAR Gander Outdoors Truck Series last year, scoring three top-ten finishes in four starts last year, as well as an impressive Daytona performance before being taken out by a crash to begin this year.

This 2019 season promised to be even better. He would run his first full-time ARCA season after turning eighteen over the winter and make more Truck starts for KBM. Very early on, however, wrinkles appeared in his season. Two weeks ago, Eckes missed the ARCA race at Salem Speedway due to a reported esophageal tear due to food poisioning. Harrison Burton relieved him, and while Eckes still participated in practice and remained eligible for ARCA’s loyalty points, the points hit of not competing was enough to bring his championship hopes down a bit. He still stood well inside the Top Ten, however, and remained confident that his #15 could in fact claim the trophy at the end of the year.

Meanwhile, the Talladega entry list was dishearteningly low for an ARCA race. Only 26 cars made the trip to Alabama, including Con Nicolopoulos back in the Wayne Peterson Racing #06, Ed Pompa and DL Wilson back with Fast Track Racing, Thomas Praytor and Max Force Racing making their first series start since this race a year ago, and superspeedway ringers Andy Seuss, Bryan Dauzat, C.J. McLaughlin, Sean Corr, Natalie Decker, Thad Moffitt, Gus Dean, Todd Gilliland and Grant Quinlan. Brandon McReynolds and Bobby Gerhart also continued part-time schedules that never really get fully decided until they are done. The entry list exemplified the divide that ARCA is seeing in 2019 - one core group for the superspeedways and large intermediates, and a totally separate group on only the short tracks.

Brad Smith anchored practice with a lap of 56.4 seconds, although he was within a second of four other cars – Nicolopoulos, Tommy Vigh Jr., Wilson and Scott Melton, back in the Kimmel Racing #69 entry. Smith moved up to 24th during qualifying, bypassing Vigh and Nicolopoulos.

The FS1 broadcast showed two dark-colored cars drop back immediately at the drop of the green. Sure enough, those were the last two starters, Vigh and Nicolopoulos. Nicolopoulos held last until Lap 9, when Brandon McReynolds drove down pit road for engine flutters. McReynolds emerged a couple laps down, shotgun on the field for the time being. With no cautions, McReynolds was in last until Lap 25, when he overtook Nicolopoulos for the spot. Less than five laps later, Natalie Decker pitted for a fuel pickup issue, and she eventually dropped to last while her #54 team put the hood up on pit road.

Decker held last for ten laps until, as green-flag stops were underway, Thad Moffitt and Eckes spun, with Eckes nosing into the outside wall after Moffitt slowed down and chopped in front of the #15 trying to get to pit road. Both cars were able to drive to pit road, where Eckes dropped the window net in his pit stall, becoming the first car to retire from the race. Moffitt, whose car was previously smoking, made two more laps before retiring with an oil leak. Vigh was next out; his Extreme Kleaner car bounced off the SAFER barrier at pit road exit after 48 laps. Decker was the last car running, four laps down. Nicolopoulos rounded out the Bottom Five, his Wayne Peterson Racing machine was also four laps down at the conclusion of the event.

As for Eckes, his last-place finish dropped him down to seventh in the point standings, 180 points behind teammate Michael Self for the lead. The gap is still by no means insurmountable throughout the remaining sixteen races, but the mistakes for the #15 team need to become few and far between. 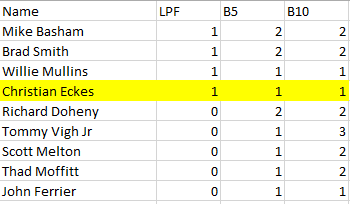