Jeff Green picked up the 115th last-place finish of his NASCAR XFINITY Series career in Saturday’s My Bariatric Solutions 300 at the Texas Motor Speedway when his unsponsored #38 RSS Racing Chevrolet fell out with brake issues after 16 of 200 laps.

The finish, which came in Green’s 519th series start, was his first of the year and first since November 10, 2018 at the ISM Raceway, seven races ago. In the XFINITY Series last-place rankings, it was the 15th for car #38, the 57th for brake trouble, and the 523rd for Chevrolet. Across NASCAR’s top three series, it was the 48th for the #38, the 161st from brake issues, and the 1,650th for Chevrolet.

RSS Racing and its flagship #39 driven by Ryan Sieg have made a statement at the start of 2019, threatening to transcend from underdogs into weekly contenders for victory. Sieg finished 10th in Saturday’s race, continuing a streak where he has finished no worse than 11th in any XFINITY race all season, and won Stage 2. This already eclipses Sieg’s season-best performance in terms of top-ten finishes, and his 9th-place rank in points matches his best overall championship rank of 9th at the end of 2016.

While new backers, most recently CMR Construction & Roofing, have joined the #39 effort, and sponsors like The Boss and Woodshed joined teammate Josh Bilicki’s run in the #93, work still remains to fund the team’s third car with its most experienced driver - Jeff Green in the #38. As in years past, Green began the year with a fully-funded effort at Daytona, and rewarded the RSS Racing team with a strong 7th-place finish. But in the five races since, while he has not finished last, Green has run no better than 32nd, forced to “start-and-park” a blank black-painted Chevrolet. Saturday would see him do the same.

Green began the weekend running just two laps in opening practice, the second jumping him to 23rd of 39 drivers. After not participating in Happy Hour, the car showed similar speed in Happy Hour, ranking 27th with a lap of 182.248mph (29.630 seconds).

With 40 drivers for 38 spots, qualifying saw two underdog drivers miss the cut. Morgan Shepherd returned to the site of his hard practice crash last fall, but his #89 Visone RV Chevrolet could only manage the slowest completed lap in the session at 166.312mph (32.469 seconds), more than 1.2 seconds off the next-slowest car. Also sent home was Bayley Currey, withdrawn from Friday’s Truck Series race and unable to complete a qualifying lap in Rick Ware’s #17 on Saturday. Both Currey and the #0 Trophy Tractor Chevrolet of Garrett Smithley did not post a time, and Smithley’s out-ranking of Currey in Owner Points left the #17 on the wrong side of the cut line.

An early spin by Jeremy Clements’ #51 RepairableVehicles.com Chevrolet on Lap 2 caused last place to change hands briefly, but just a few laps after the restart, Green had pulled the #38 ehind the wall, followed four laps later by Hill. Finishing 36th was Brad Keselowski, who finished inside the Bottom Five for the second-straight XFINITY Series start after a crash on Lap 66. Ray Black, Jr.’s day ended after the ensuing restart, when the #07 Isokern Fireplaces & Chimneys / Scuba life Chevrolet backed into the Turn 2 barrier. Rounding out the group was Cole Custer, winner at Texas last fall, whose #00 Jacob Companies Ford tangled with Brandon Jones on Lap 133. Custer and Black earned their first Bottom Fives of 2019.

Many of the drivers who suffered pre-race penalties went on to score solid finishes. DGM Racing teammates Josh Williams and Ronnie Bassett, Jr. finished 14th and 15th, a career-best for each driver, with Bassett’s coming in just his second series start. Gaulding recovered to finish 21st, which while it was his second-worst finish of the season, has kept him 15th in points. Martins finished 19th, his second-straight top-twenty finish and season-best for 2019.

In addition, Brandon Brown – his rear decklid covered with the Twitter handles of 62 fans – went on to finish 17th, his sixth-straight finish of 18th or better in 2019. The still-unsponsored #86 Chevrolet holds 14th in the series standings, 141 points back of the lead held by Tyler Reddick. 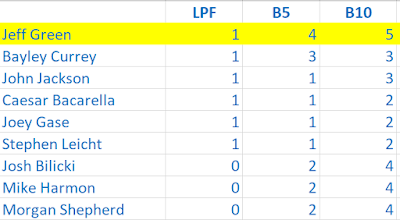